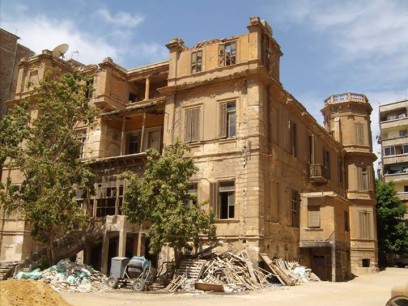 In 1941, Lawrence Durrell was living in Greece with his wife and daughter. When Greece fell to the invading Nazis, they, along with other British nationals, were evacuated to Egypt. At first, he was dissatisfied with his new situation. He had been forced to leave his beloved Corfu and his marriage, soon to be over, was not doing well. His wife and daughter eventually left for Palestine, the safe haven for British families, and Durrell became a press officer at the British consulate in Alexandria. He remained at this post until 1945.

His first apartment was a hovel, which he shared with fellow author, Paul Gotch. Soon he met the Ambrons, a family of substance and culture who generations before had migrated out of the Levant to Alexandria. Aldo Ambron was one of the richest men in Alexandria and his wife, Amelia, was a portrait artist. One daughter was a musician and the other daughter was an artist, who painted with her mother. Their son was also an artist and it was his collection that formed the basis of the art museum in Bali. The Ambrons were very generous people and often entertained Alexandria’ s elite. They enjoyed their role as patrons of the arts while putting together a collection of paintings, sculpture, and books. They befriended Durrell and often invited him to their parties where he had an opportunity to meet their illustrious friends. They rented him space in their house where he lived there from 1941 to 1945.

With Mohammad the driver and Mohammad the guide, we set off to find the house, which today is located in a very poor section of Alexandria. Even though I had the address, Mohammad had to stop several times for directions. I do not think they knew Lawrence Durrell but at least they knew the street. The house is located at # 19 Sharia Maamoun, in the middle of a short street. As soon as Mohammad pulled into the yard, a small child rushed to wake the caretaker, who was sleeping soundly on a small pallet placed under a shade tree. Donald started taking pictures and now on the job, the caretaker followed along.

The villa, beige with faded yellow shutters, was built in a neo-Classical Italianate style with homage to the Renaissance. Its two stories and basement project the style and elegance of its owners. The Italian architect who designed the Cecil Hotel also worked on this house, responsible for the atelier in back where the women painted. This is where Durrell met Clea Badaro. She was an artist, often invited to paint in the studio with Amelia Ambron and her daughter, Gilda. This is the Clea who had a minor part in the three novels and became the main character in the final book of the Quartet, Clea. The daughter was mentioned in the second book, Balthazar. A backyard garden, the site of many parties, had been designed around a massive banyan tree. There had been a famous continuous blooming flower garden framed by flame of the forest trees and a sculptural garden exhibiting their collection.

Before attempting to go inside, I walked around to the back. The day before I had just finished reading Clea and I think I was looking for her. I had spent quality time with this woman. I felt I knew her but wanted to become better acquainted. I also had questions that only she could answer and since so many years had passed since her inception, I was curious to find out how she was doing. Unfortunately, the backyard has been totally destroyed, favoring more of a construction site than a garden. It has been grated over, down to the dirt with nothing left to bloom. The sculpture garden must have been removed years ago. Maybe I did not know where to look, but I could find no structure that would have been their studio. Another cleared lot lay beyond what must have been their property line. I know this house is a collection of other people’s memories but it is poignant to realize what had once been no longer exists.

The front of the house is in total disrepair and similar to the backyard, small piles of garbage are scattered around. A wagon had broken down and all its parts, included the wheels, are piled up in a corner, as if waiting for someone to reassemble it. Parts of the floor of the projecting balustrade porch have rotted and caved in and concrete has fallen away from the supporting pillars, exposing the brick core and weakening its structural function. As if invited to one of their parties, I walked up the steps and entered through the front door. I stepped into a reception area and noticed a large room to the left and another to the right and a long hallway stretching out in front of me. I did not investigate any further because the floors are torn up and parts of the ceiling have collapsed.

On the right side of the house, the flat façade is interrupted by a projecting three-sided structure, as if a tower had been engaged to the house. Durrell occupied this space on the second floor. He brought in a desk especially designed to fit the room and from here, he wrote Prospero’s Cell, which described life on Corfu. It was in this room where he made his notes that he turned into the Alexandria Quartet, one of the most important literary works of 20th fiction. He was introduced to Eve Cohen, who eventually comes to live with him in this room. She would become his second wife and served as the model for Justine, the most important character in the Quartet. I wanted to walk up and take a look but the wooden stairway to the second floor has collapsed.

Outside I noticed the window to his room was open. I looked up and thought of him standing there, looking out, deciding what to write next. I had read the novels, I had read their memoirs and thought about the kind of life he and his friends lived in wartime Alexandria. As the result of Hitler’s advances into Greece and the Balkans, refugees poured into Egypt. During the desert campaign between the Germans and the Allies, life in Alexandria must have been intense. After Tobruk, Rommel pushed within sixty -five miles of Alexandria, promising to eat breakfast on the Corniche. The Egyptians were secretly preparing to welcome his arrival because they believed the Germans would liberate them from the British. I thought of his new wife, Eve. They were newly lovers and how the two of them must have lived on the edge of their emotions. For anyone who has read Justine, Eve Cohen must have been an incredible woman.

When Donald and I were traveling through Cyprus, we crossed over to the Turkish side in search of a house Durrell occupied. While he lived there, he wrote Bitter Lemons. Even though people living in the immediate vicinity of the house did not know of Durrell, the house was at least being maintained and a sign had been posted advising the years he had lived there. Unfortunately, this villa is not receiving the same kind of respect. The house was eventually sold to a local contractor who must have been responsible for grading off the backyard. Recently, it has been the efforts of the U.K. Friends of the Alexandria Library and the American Ambassador that have saved the house from being totally demolished. They hope eventually to be able to restore the house. The government says they agree but like we have seen in Cambodia, nothing is being done and the house is just being allowed to deteriorate. The contractor will not have to demolish it; time will do it for him.

It was late afternoon when we finished touring the house and the sunlight was casting long shadows against this forlorn structure, one more example of Alexandria’s former cosmopolitan society. It has been a long time since the clip clop sounds of the horse drawn gharrys/carriages had been heard. Maybe Durrell was correct when in Clea he described Alexandria as a “shabby little seaport built upon a sand reef, a moribund and spiritless backwater”. Reminders of Alexandria’s colonial past are only important to the foreigners. As for the local people, they are only memories of repression.

As we were leaving, the caretaker told Mohammad he did not understand why foreigners kept coming to take photos of a broken down house. If he did not know about Durrell, I am sure he never heard of Mahfouz.

1 thought on “Egypt: Trip to Alexandria – A Visit to Lawrence Durrell’s House”