FIRST A VISIT TO THE FISH MARKET 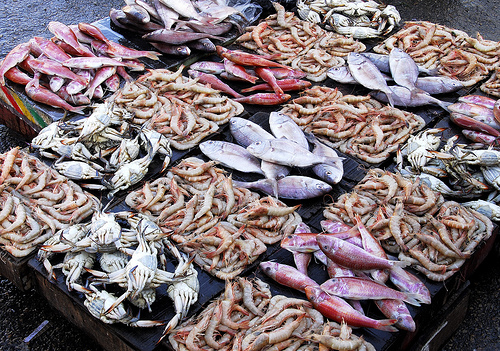 We toured in Alexandria for two full days, time enough to cover all the important sites and to contemplate what was no longer there. Before we began the official tour, I wanted another slice of daily life and suggested a visit to their wholesale fish market. Since the days of the Pharaohs, the Egyptians prefer sailing on the Nile as opposed to exploring the Mediterranean Sea. Nevertheless, the Alexandrians are passionate about fresh seafood and rely on their local fishermen to supply their needs. Once again, Mohammed did not understand. He never understood our trip to the camel market and he could not understand why we wanted to see dead fish. Alexandria has been called either the “royal city” or the “anus mundi”. I believe Mohammad was thinking he was going to the latter.

The main fish market is located in an old limestone building off the Corniche at the western end of the Eastern Harbor. This area, called Anfushi, is the old Turkish part of town, often the setting for Lawrence Durrell’s characters. The fishing industry here is rather simple. As they have done for ages, fishermen go out in small wooden boats with nothing more technical than a few nets and return to sell their catch at this market. Fishing is a family business and once again, the son is expected to take over from his father.

We arrived at 8:00 AM. There was a pleasant breeze blowing off the Mediterranean and in the morning light, the sea sparkled a rich blue green. We noticed the parking lot was not full and realizing we were too late for the frenetic action, I was hoping there would still be enough activity to make it interesting.

Many colorful boats were tied up at the docks, which are adjacent to the main building. These fishing boats, constructed out of wood, are old and small, giving us the idea they do not venture too far out. Even though they were all the same shape, each boat was painted in an individual manner with various stripes of yellow, red, and green. As per tradition, the dominant color was blue. Several had an eye painted on the side, similar to the eye of Horus, a talisman to ward off evil. Crowds of men in tall rubber boots were working the docks. Many were engaged in unloading the catch and moving it into the main building. Some fish were being hauled out in big plastic buckets and others had been placed in antique wooden trays. Once unloaded, these men restocked the boats with long rectangular columns of ice. Those that had already delivered their fish were trying to move out of the way to allow the other boats to unload. Unlike the manner in which most Egyptians drive, these fishermen seemed to be cooperating with each other.

Once inside the building, the fish were taken to the various vendors where they were assorted and artfully nestled into beds of chipped ice. When we entered the building, we walked gingerly as the floor was covered with water and slippery from the detritus of left over fish parts. Cats were everywhere, taking advantage of the situation. We had entered the world of the fishmonger. Sellers were taking turns shouting out the description of their fish, the prices, and asking the buyers just to come and have a look. This was not exactly Seattle Pike’s fish market where they throw the fish but there was certainly enough buyers holding up fish, poking them in the side, seeking firm flesh and taking a hard look at their eyes. We were the only tourists and at times, I was mistaken for a buyer and offered trays of large shrimp and calamari. I just waggled my head with a no thank you, hopping the fish and shellfish would look that good at dinner. As for Mohammad, he returned with fish parts stuck to the bottom of his shoes. I guess for him, just like the camel market, the fish market was another “annus mundi”.

According to the Old Testament, Jews have had a presence in Egypt since Joseph with his coat of many colors and Moses and Aaron. In the 4th B.C., Alexander encouraged Jews to move to his new city. They responded and soon two of Alexandria’s five sections became known as the Jewish Quarter. Under the Ptolemy’s, they enjoyed religious as well as political freedom. At their height, they represented 25% of the population and contributed to the vibrant cultural life of Hellenistic Alexandria. Even though they suffered intermittent persecution, they continued to do well under the Roman Empire. When the Jews, as well as the Moslems (Moors), were expelled from Spain in 1492, many of the lucky ones were able to settle in Egypt. In modern times, after Napoleon’s arrival, the Jews took an active part in the economic development of the country. Growing from around 25,000 at the beginning of the 20th, their number increased to approximately 40,000 to 50,000 by mid century. In Alexandria, they became an important aspect of its cosmopolitan culture.

They may have led parallel lives, but Jews lived in peace with their Moslem neighbors until the creation of the state of Israel in 1948. This began the expulsion of the Jews and the confiscation by the state of their property. In 1956, the time of the Sinai Campaign, the government announced that all Jews and Zionists were the enemy of the state and would be expelled. Then 25,000 Jews were forced out with nothing more than one suitcase and twenty Egyptian pounds. This policy was continued after the 1967 Six Day War.

Today, Alexandria is a city of four million people and there are less than twenty Jews remaining in the city. Fifteen are old women residing in nursing homes and the remainder is old men. In the Jewish religion, ten men, over the age of thirteen, are necessary for a minyan, a prayer group. Therefore, today, after living in Egypt for over 2,000 years, there are not enough Jews left in Alexandria to hold a religious service.

A VISIT TO THE SYNAGOGUE 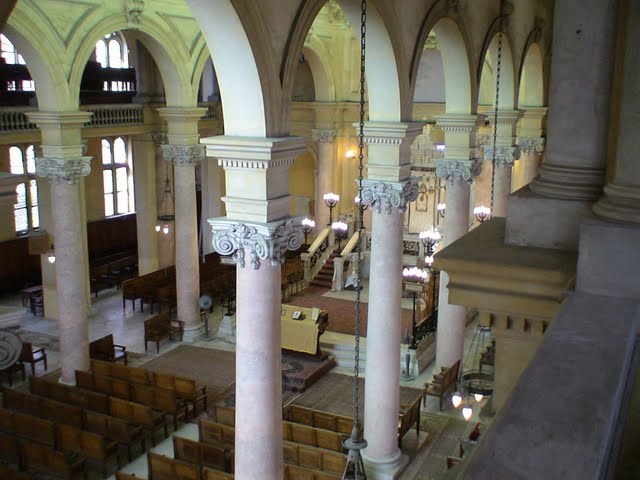 The Eliyahu Hanaui Synagogue was built 150 years ago by Alexandria’s Sephardic community. It is one of the largest in the Middle East, seating up to 1,000 people, and is considered the most beautiful. The Jews have never established synagogue architecture, relying instead on local traditions. This synagogue’s series of arched windows gives it a neo-classical style but there is a Levantine twist including influences from the surrounding Islamic culture. It is built out of cream colored stone with interior pink marble columns, a stately building testifying to the achievements of the Jewish community.

The synagogue is located on a large plot of land on Nabi Daniel Street and is surrounded by a high wall. The entire area is heavily guarded and when we arrived, a van loaded with policemen was parked at the corner. The entry is off a narrow side street requiring Mohammad to convince them to raise the barricade. For the first time I had the feeling that the police were paying attention to what was going on. We did not know to bring our passports and after much conversation, Mohammed persuaded them to accept our copies. Then we were subjected to a thorough search. They patted Donald down and required me to empty my purse one item at a time. After passing through the security gate, we were met by an older man who told us he would be our guide. This gentleman was originally from the Sudan and has worked for the Synagogue for the past twenty years. When I asked him how he obtained this job, he told me he worked for a Jewish man who owned a clothing store and he offered him the job. He told us they treat him very well and he would never think of leaving.

The building was in pristine condition, as if the walls had just been painted and the chandeliers recently polished. This is Alexandria’s main synagogue and it has become the depository for torahs gathered up from those synagogues that have been forced to close. He opened the ark and we were able to view part of the collection. As in all Orthodox synagogues, there was a loft in the back for the women. It was very poignant to see the brass plaques on the backs of the wooden benches bearing the names of families who had once prayed there. Our guide led to us a lovely well tended garden with rose bushes and palm trees. On the other side of the garden, he pointed to the buildings that had once belonged to the synagogue. A four story building had been used as a religious school but is now being rented by the government as a school for girls. Another building had once been an apartment building. Today this is also being rented by the government. This income is vital to the support of this remnant of a Jewish community.

The guide brought us to the administrative office to meet Ben Yuussef Gaon. At age fifty-four, he calls himself the baby of the community. In various capacities, he represents the only organizational structure. After pleasant introductions, I asked him why are you still here? His answer was simple. He was still there because Alexandria is his home. His family has been in Alexandria for four generations. On his mother’s side, they came from Aleppo, Syria, and on his father’s side, from Spain. His father had been a tailor. Nasser was one of his clients and before Nasser, the father made uniforms for King Farouk. Maybe this was the reason his family had not been expelled. His wife was a Christian but she died in an automobile accident several years ago. His uncle left Egypt for Switzerland where he is in the hotel business. I am not sure about his children. He visited Israel but that is not the place for him. He believes himself to be an Egyptian. He speaks Arabic not Hebrew. Yes, he keeps a low profile but his friends are Muslim and at times, he shares a Ramadan meal with them. He told us for the important holidays Jews from all over the world come to Alexandria, making enough men to hold a proper service.

Apparently, there had been no reason to redecorate his office and he was still using the same furniture from the 1940’s, with only the computer as a new addition. Leather bound books are stacked in the cabinets and piled up on the table. These books were used to record the activities of the synagogue. There have been no births recorded for over twenty years, only deaths from an aging community. The torahs they have been able to save, the leather bound books, the building, and the memories handed down all testify to the vitality of a community now almost extinct.