When you leave home, take along a romantic sensibility and a traveler’s imagination so you can conjure up an attachment to the places you visit and sympathy for the people who are just trying to survive. You should leave the confines of the hotel, get out there, roam the city, walk the walks, engage the people and have personal experiences that will be remembered long after the information from the tour guide is forgotten. Often I have said this is not possible if you travel inside the sanitized tourist bubble of mini vans, drivers and guides. But I saw travel in Egypt as different and this time for the sake of safety, we spent twenty-eight days with drivers, guides, and minders strapped to ourselves like additional appendages.

I gave our travel agent a list of places I wanted to visit and activities I wanted to accomplish. After listing the usual Pharaonic sites and Greek and Roman ruins, I treated the Old and New Testament as a travel guide and ecumenically listed sights important to the Roman Catholics, remember the flight into Egypt, Greek Orthodox whose third most important pilgrimage site is St Catherine’s monastery in the Sinai Desert, the Coptic Christians, inventors of monasticism in order to avoid Roman persecution, and the Jews, with thoughts of Joseph and Moses. These sights took us from Cairo to Alexandria, along the Nile from Aswan to Luxor, and to Sharm el-Sheikh in the Sinai Peninsula. In addition, we visited both the eastern and western desert, spending one night under the stars in a tent and another in an oasis guesthouse. We traveled in mini vans, which were too large, cars that were too small, and four-wheel drives with their significant parts held together by rope. In the heat of the mid day when the sun burned like a brazier, we rode on camels, which refused to be civil, and in the early evening, we observed a sunset over the Nile, sitting in a felucca (a traditional boat) which refused to sail. Time constraints did not allow for the traditional Nile cruise between Aswan and Luxor and personal preference nixed the Nile Dinner cruise complete with belly dancing. We constantly turned down opportunities to visit mummies, as I had the distinct feeling, except for the art work which at times covered their bodies, seen one mummy seen them all.

In order to prevent our memories from being filed in a forgotten cabinet, I kept a journal of all our travels, nailing down our experiences and impressions with words on paper. If I described everything we did with, “we went here, and then we went there”, I would be attempting a tour book. That I leave to the Lonely Planet and others. My plan is to record experiences, not in the order in which they took place, but in the order in which they now come to mind. This gives a kaleidoscopic approach, freed from the strictures of chronology, those sequential events flowing tidily from beginning to end. What follows is our experiences that were just a little off the usual tourist trail.

A TRIP TO THE CAMEL MARKET

When I first read about the Friday camel market held outside Cairo, I knew I wanted to go, especially because this seemed an excellent opportunity to experience traditional culture in the raw. When I presented this request to our guide, Mohammad, I knew immediately he did not want to go. He saw himself as a highly educated Egyptologist, not interested in anything that postdated the Pharaohs. Actually, from previous experience, we knew he did not like to mingle with the people, did not want to deal with us mingling with the people, and did not enjoy getting his shoes dirty. Knowing it was not wise to say no to a client, he said the trip was not possible because the road was not good, the car could not go, and besides, I would not be interested in seeing this. I parried with this is the largest camel market in Egypt, it promises to be a tourist free zone, call your travel agency, hire a jeep and driver, and Donald and I will go without you. Slowly he was learning the futility of getting in the way of a determined American woman and on Friday, after visiting several Coptic churches, with Mohammad our driver and Mohammad our guide we were on our way.

Until 1995, this camel market was held in a suburb of Cairo but as Cairo continued to sprawl, the land became too valuable for a bunch of camels and the market was moved to Birqash, a small village twenty miles north west of Cairo on the edge of the Western Desert. Since neither of them had been there before, our only problem now was to find the village.

WHERE DID THEY PUT THE CAMEL MARKET?

Returning from the visit to the Coptic churches, we were heading south on National Highway 6 when Mohammad turned off the road, following the sign to Birqash. Ahead of us was a large billboard advertising a planned upscale residential community. It pictured a two-story brick house, complete with all modern conveniences and a proposed shopping center was featured in the background. In the center of the billboard were the smiling, happy faces of an Egyptian family, who presumably would be moving into this neighborhood. Funny, the mother was presented in Western clothes without a headscarf. If this project became more than a billboard, the village would be bought up and the adjacent land would became more valuable, maybe forcing the camel market to relocate one more time.

Until that happens, one turn off the road brought us into an idyllic, timeless country setting with more donkey carts than cars. The narrow sandy road followed a canal, one of the many that branch off from the Nile. Instead of the stagnant, garbage infested waterways of center city Cairo, the water here was gently moving, willow trees, dropping their long over hanging branches, were reflected in the water and white birds were fluttering over head. The geese, ducks, fish, and cattle seen in the villages today are the same as those painted on the walls of ancient Egyptian tombs.

Under the every present brilliant blue sky, sedge plants lined the canal bank and a young boy was skillfully maneuvering a small flat bottom boat. As we passed, he waved. We passed small villages of sun-baked brick houses connected to each other by dusty unpaved roads where goats roamed and children played with simple homemade toys. With their galabiyyas tucked up between their legs, the fellaheen, Egypt’s enduring farmers, were tending their fields, green mosaics of alfalfa, tomatoes, cucumbers, and other vegetables growing in rich black soil. Canal water irrigated the crops, the water raised by pumps, no longer depending on the ancient shaduf. Egypt’s fertile soil was created by the yearly inundations of the Nile and during the time of the Pharaohs, Egypt was known as the Black Land. Today, the Aswan Dam regulates the flow of the Nile and there is no more flooding. Desert hills rose up behind the village, a buffet of buffs and browns. The lush, cultivated land ends so abruptly that in one pace you can step from the Black Land into the Red Land, the ancient name of the desert.

There were no directional signs to the camel market and at each cross road, Mohammed, the driver, had to stop and ask for directions. All visitors to a foreign country make broad generalizations from small samplings but our observations concluded Egyptian men, when in groups, express no interest in foreigners but are always willing to take the time to help each other. Mohammed, the driver as opposed to Mohammed, the guide, had a friendly manner and after obtaining each new piece of information he uttered, “shukran” and placed his right hand over his heart, Arabic for thank you. When we saw truckloads of camels coming down the other side of the road, we knew we were near. Actually, it was a ridiculous sight to see a truck full of camels with only their necks and heads sticking out. Soon enough we would find out how this came about.

The flatbed truck ahead of us had been stirring up plumes of dense dust but by the time we reached the top of a hill, the dust had settled affording us a view of the surrounding countryside. The brick wall enclosing the camel market was on high ground to our left. But as if someone had pulled back a curtain, looking down the hill, we were greeted with ghoulish tableaux of apocalyptic proportion. We were in the middle of a garbage dump. The side of the hill was covered in piles of smoldering garbage, sending the occasional flame into the air. A pall of smoke hung over the hillside like a shroud, blurring all clear outlines. But looking carefully, we could see the ground was littered with the bodies of dead camels, lying on their sides with distended stomachs, in various stages of decay. Bevies of ominous scavenger birds were on duty. Some sitting nearby, as protecting their prey, others at work on the head, eyes, and other readily accessible parts. Some carcasses had been picked clean of all flesh and bones of various sizes were scattered about. A forlorn sight apparently filled with those camels that just did not make it to the market.

Mohammad drove through the gate and we were immediately stopped by an official and informed we had to buy a ticket. Even though there were no tourist buses, they had decided to be prepared. A small fee entitled us to a yellow paper ticket with the picture of a camel stating “Camels Market Tourist Tackets”. In front of us was a large open area bounded on each side by a series of corrals. One-story mud brick buildings were attached to the corrals and bales of hay were stored on the flat roofs. Nothing more than primitive shelters, they could be used by the herdsman who had brought the camels to the market. Our driver slowly drove through this area giving us plenty of time to look around. I presume Mohammad, the guide, was hoping this would satisfy what he must have been cursing as our insatiable curiosity. But when we reached the back wall and Mohammed, the driver, began to turn the car around to head back to the gate, Donald told him to stop, we were getting out, and they could meet us at the front gate.

Opening the door, we immediately received a body punch from a gust of air, gritty with sand and redolent with the scent from the camels tied up at the nearby fence. Now our guide had to join us. With fear of losing us and fear of getting his shoes dirty, he got out of the car. The three of us stepped gingerly around the tethered camels, staying clear of an unwanted stomp from a splayed hoof and hoping to avoid a direct hit from camel flatulence.

With eyes full of curiosity, we began to walk through the compound. I noticed everything was the color of beige: the sand, the buildings, the bricks, the fence, the camels, and the men’s dirty galabiyyas. A group of men with long sticks approached the camels by the fence and we stopped, waiting to see what would happen next. As for Mohammed, he was watching the ground, on the lookout for piles of camel dung, still thinking about his shoes. 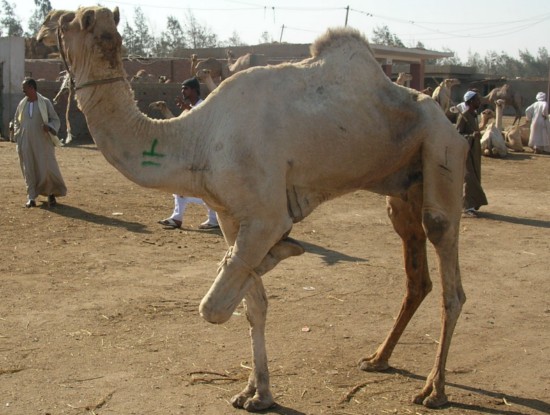