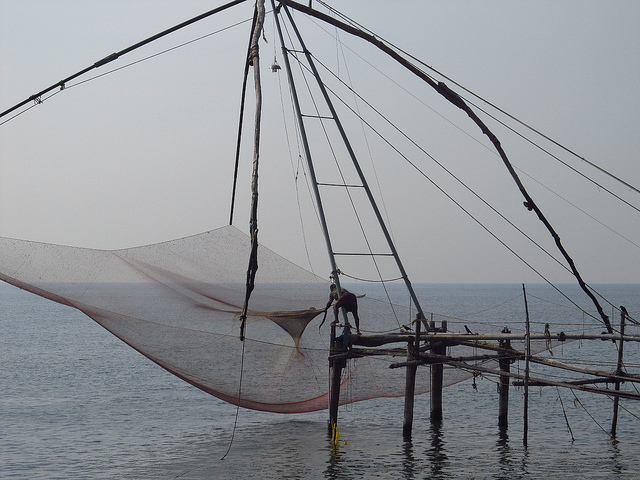 Kerala and especially vicinity of Fort Kochi is known for the Chinese fishing nets believed to have been introduced by the Portuguese settlers who brought the nets from their offshore China stronghold of Macau. While in Fort Kochi only a few nets remain, on the Vypin Island to the north there are still number of them operated by local fishermen daily.

The nets are not open sea nets but shore based lift nets. The net is bowl-shaped, some 50 to 60 feet in diameter. The huge net is lowered mechanically, of cantilever design, where the large stones suspended on ropes create the counterweight and often only a single man is enough to operate the net. Typically at least two men work the smallest of nets, one lowering and raising the net, the other climbing the raised net to scoop out the catch, often only a single fish.
When I watched the fishermen work their nets they lowered and raised the net every five to eight minutes, as soon as sensing a fish coming into contact. Not always, however, they would raise the net and have a catch. In a span of an hour they would catch eight to ten small fish, each only six inches or so long on the average.