As dzongs, the Bhutanese houses too are massive in construction. Typically at least two-storey high the house characteristic windows design follows those of windows in the dzongs and monasteries. Unlike the typical Tibetan house type of a flat roof, Bhutanese houses include sloping ventilated roofs protecting storage and work area on the roof of the top floor. Designed to protect from rain and snow the roofs are typically covered with timber shingles weighted down with stones, though in recent years more corrugated iron can be seen. As windows, the hardwood eaves are highly decorated.

The exterior walls are decorated with Buddhist symbolism, whether to represent the endless cycle of birth or suffering, death and rebirth as the Endless Knot does, or to both protect, such is an image of a Tiger or a dragon, or simply to bless the household. A unique image painted on Bhutanese houses in profusion as well as carved of wood and suspended off the eaves to ward off the evil spirits are depictions of giant phalluses. Though perhaps most surprising to the casual visitor from the West, the penis images are believed to protect the residents. 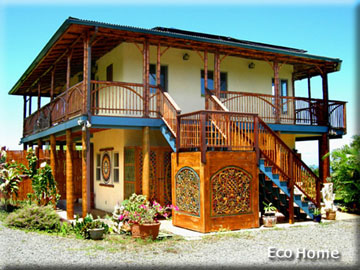 Using bamboo instead of wood in building houses could go well with Bhutan’s policy of sustainable development, and it may well be considered in similar applications elsewhere in tropical and subtropical regions around the world. Bamboo can yield 20 times more timber than trees per acre and it can be harvested after every seven years whereas trees take about five to eight times longer, and bamboo is both cost effective and environmental friendly. Additionally, building a masonry house using high quality bamboo can bring down the cost at least 20%. Furthermore bamboo plantations are also environmentally friendly and help reduce carbon dioxide and generate 30 percent more oxygen than tree.

l residents, as is the case of Ura, a village west of Bumthang, or a hillside village near Wangdi, though often monasteries are also found in isolated locations, even carved into sheer cliffs as in the case of the famous Taksang monastery, where monks were in ultimate seclusion to pursue their spiritual path.

Monastic architecture of Bhutan stands in a remarkable chapter of design of its own. Monasteries are built around a lhakhang, literally meaning, House of God, basically a temple that houses the image in whose honor the temple is built, and the monk quarters, usually separate buildings, are built around the temple. Often there are more than one temple within a monastery, as for example at the Kurjey Lhakang monastery, though always there is one main image that’s venerated above the rest.

Smaller lhakangs are also found at the top of mountain passes, by roadside or in isolated locations elsewhere, sometimes below a large and ancient tree or a waterfall. Additionally various crevices in cliffs, or niches in walls may house a mani stone inscribed with prayers or clay votive images behold yet another form of a house of god.

Then there are stupas or chortens, another structures of Buddhist worship, containing relics, typically the remains of a saint.

Interesting architectural feature of Bhutan are its dzong bridges. Covered and richly decorated they represent a unique expression of design.

Bhutan is changing, slowly but surely, and storefronts with billboards sporting India’s Bollywood movie stars alongside Pepsi or Coke images have already been criticized by outside visitors to Bhutan. But time and modernity is marching in. Internet cafes and TVs and discotheques are already present as is also an occasional gift shop or two selling Western style toys for kids, though right next door a local will be busy polishing street-side lhakang butter lamps.

No student of Bhutanese architecture can disassociate its physical form from the faces of those that create it. Bhutan is a rich composite of fascinating faces and pace of life, with a wonderful ambiance of the pristine and remote that the Westerns crave and come to Bhutan to taste, for few places on Earth offer it on such a truly unique scale as does Bhutan.