Several days after returning from the White Desert, we left Cairo, destination Alexandria, where we were scheduled to spend three nights at the Cecil, hotel of choice during the Colonial period. The distance between the two cities is 140 miles. In 1856, the British linked Cairo and Alexandria with a rail line and in 1925, they began the Alex to Cairo Desert Road. In summer, the expats and British government officials made their annual exodus to Alexandria, where they enjoyed the sea breezes away from Cairo’s blistering heat. The Desert Road, began as a narrow two lane road, which often disappeared when windblown sand covered the tarmac. In those days, because travel was an effort, you journeyed and the trip took two days, requiring an overnight stay at a way station. Special tires were needed for the hot road as they battled sand, wind, and heat.

Mohammad was still the guide and Mohammad was still the driver. We left Cairo at 8:00 AM just in time to take part in their morning rush hour. After an hour of continuous traffic jams, we found ourselves on the Desert Road, now a four lane highway divided down the middle by olive trees. As always, the painted lines were only a suggestion and we drove wedged in amongst multiple lanes of cars.

When our driver pulled off the road, we thought it was another food stall, but Mohammad wanted us to get a good view of the Smart Village. Mohammad urged us out of the car, making sure we brought our cameras. This is an 8,000 acre government supported multi use industrial park set down in the middle of the desert, established to attract international companies. The government provides the land at no charge and the companies pay for the building. The architecture is uniform, white plaster with tinted blue glass and the cavetto roof, made famous by Tutankhamen, prevails. Within this compound there is also a residential site housing employees. The buildings are being maintained and climbing cranes ruled the skyline. It was the most forward looking project we had seen. The desert location means there is plenty of room to expand even though they have to sink wells up to 100 meters deep. Satellite cities are developing around Cairo as a way to deal with the increasing population. Across the road was another planned community with exceptionally large houses, gates, and shopping area. In the distance, we could see the conical tower of a dovecot where troops of pigeons must have been congregating and a cell phone tower disguised as a palm tree. Egypt, a combination of the new, the old, and the kitsch. 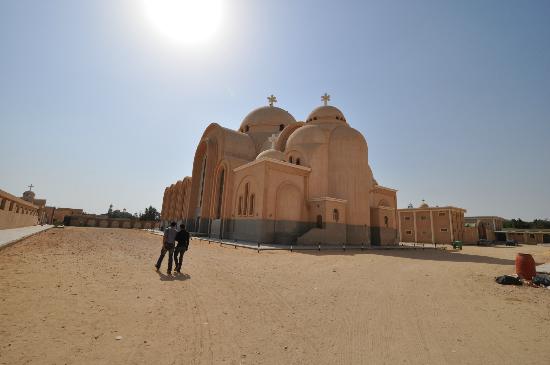 Our first destination was Wadi Natrum, sixty five miles north west of Cairo. During Pharaonic times, this area was an important source for natrum, a kind of salt found in dried lake beds used in the embalmment process. If the body was not embalmed properly, it had no hope for resurrection. We drove into the countryside, through dust brown villages and after enough questions, Mohammad found the famous Coptic Monasteries.

Mary, Joseph, and baby Jesus fled to Egypt to avoid the Massacre of the innocents but it is St. Mark, who converted the first Egyptian in 45 AD, who is credited with bringing Christianity to Egypt. (This is the same St. Mark whose body was stolen out of Alexandria by a couple of Venetians who brought him to Venice and named a square after him.

The Egyptian Christians would be known as Copts. As the new religion spread, it encountered Roman persecution, forcing the believers to seek safety in the desert. There, removed from the secular world, they lived a spiritual life seeking salvation through prayer and solitude. Late 4th, St. Anthony preferred the life of a hermit to that of a landowner. Giving away all his worldly possessions, he took up residence in the Eastern desert. Those followers who gathered around him are credited with establishing the first monastery. It was from Egypt that monasticism spread to Europe. Within the developing Christian community, there had been an argument over the nature of Christ. By 451 and the Council of Chalcedon it was established that Christ was fully god and fully man. The Copts refused to believe that Christ had two natures and split off from the Roman Church. With the arrival of Islam in the 7th, the Copts suffered at first from the Arabic armies moving across North Africa on their way to conquer Spain and later from the Bedouins. At the peak, there had been 60 monasteries in the area and today there are only four. Recently, there has been a Coptic revival and the number of monks residing in these monasteries has increased.

The church is the focal point of the monastery and is surrounded by monk’s quarters, small unadorned cells, the kitchen, bakery, and store rooms and the very important well, located within the compound. In order to protect themselves, these monasteries are surrounded by fortification walls and trap doors allowing for a fast escape. The setting was tranquil with the occasional sound of the bells and the date palm gardens provided necessary shade. In each place, we were given a tour by bearded monk dressed in a black hooded robe. Once they commit to being a monk, they never leave and do not have visitors.

The frescoes, dating from the 8th to the 13th, were my main interest and they covered most available surfaces. Support posts were usually covered in images of local saints, their posture and their robes decorated with jewels and pearls revealing Byzantine influence. Several frescoes had been cleaned revealing vegetable dye colors that had maintained their vibrancy. Where the frescoes were peeling off the wall, earlier frescoes were being revealed. The various artists had an advance use of line, revealing the body that existed under voluminous robes and were sophisticated in the use of spatial effects. In places, the monk guide pulled back the curtain allowing us to view the frescoes behind the iconostasis. There is some disagreement as to the dating of the various frescoes but for the period they seemed to be of quality equal to anything found in Italy. 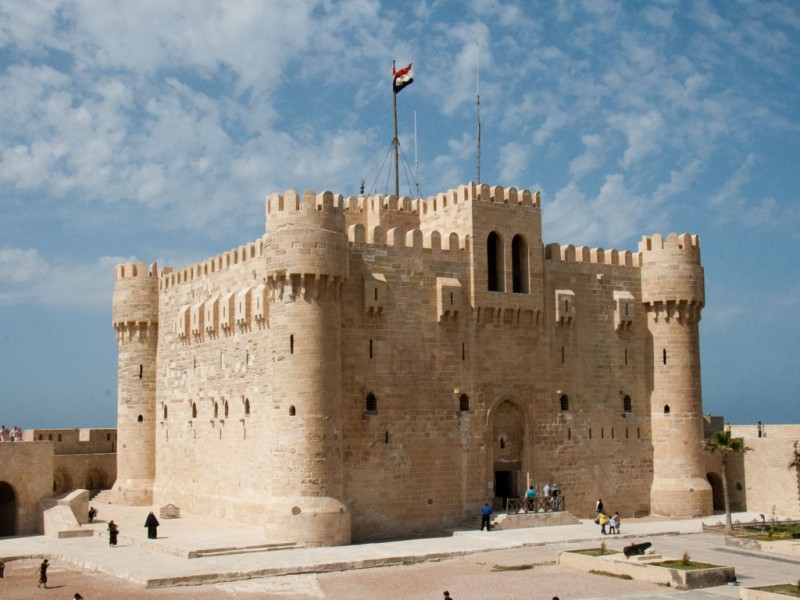 Back on the Desert Road, we were once again encircled by desert, with a sun, anxiously heating up, shinning down from the brilliant blue sky.  At times, the heat fogged the distance denying a horizon and at other times a mirrored surface of silver water sparkled in the distance, mirages disappearing when we approached.

Alexandria hugs the Mediterranean coastline, extending twelve miles east to west but less than two miles inland. Approaching the city we drove through an industrial area of oil refineries and storage facilities. We entered a marsh land, similar that where Nessim, a character in the Alexandria Quartet, held shooting parties during the migratory bird season. Towering grasses and spiky pointed reeds fringed the water line and white egrets flew low over tufted islands of sedge plants. This watery wilderness of channels navigable in a shallow punt is a timeless scene similar to those painted on ancient tomb walls.

We arrived in Alexandria at 4:00 and even though we were too late for lunch and too early for dinner, Mohammad followed the tour program that stated, “lunch at fish restaurant is included”. Mohammed brought us to the best fish restaurant in town, appropriately called The Fish Market, located on the water in the Eastern Harbor. Stepping up to the counter we were greeted with a wide selection of fish and shellfish that had been swimming in the sea that morning.  Alexandria is famous for seafood and our table was soon covered with platters of fried calamari, shrimp sautéed in garlic, plus a large lobster for each and a small grilled fish for me. We also enjoyed the usual assortment of Middle Eastern salads and warmed pita, along with French fries and cole slaw.

Mohammed came to see how we were doing and when the waiter handed him the bill, he did not say anything but a troubling frown came over his face. After checking with his office, we were informed that we had exceeded the limit and the tour company would not pay for our lunch. Apparently, they were expecting us to eat a piece of fish with French fries. Instead, our bill was $110.00, which did not include beer or wine because it was not on the menu. We understood and paid for the lunch. After that, we were each given a per diem of $10.00 to cover lunch. When we got tired of kebabs, kofta, kibbe and mezzes of babaghanoug, hummus,labneh,tabbouleh, and tahina we went Western and even though not as good a home, we enjoyed the Burger King and McDonald’s. We even ate with the Colonel. However, there was no bacon for the bacon, cheddar cheese burger.

Cecil Hotel is located in the center of the Corniche with a view of the Eastern Harbor and directly opposite the former location of the famous lighthouse. It was built in the 1930’s and became the center of political, economic, and social life during the Colonial Period. It is fondly remembered by those who came by at tea time or for a drink at the bar. Lawrence Durrell mentioned the hotel in his novels and Somerset Maugham and Noel Coward stayed there. During World War II, Winston Churchill checked in and the British Secret Service maintained their offices on the first floor. The smell of cigar smoke still lingers in the bar, even though it has been moved to the second floor. Today it is called the Monty bar, in honor of the famous British General Montgomery who defeated Rommel and his Afrika Korps at El Alamein, around sixty mils to the west. The hotel is now owned by the Sofitel chain and has been renovated several times, maybe not achieving the panache of the past, but certainly good enough to feed the imagination.

Checking into the hotel , we were greeted with the traditional Egyptian hospitality and became the recipient of an upgraded room. We now had a corner room, overlooking the Mediterranean Sea from two directions. Since they called this the VIP room, I was certain someone important had stayed there, maybe Churchill? We were escorted to the little elevator, which was original to the building. It was made by Otis, the inventor of the elevator. We stepped into a charming wood paneled metal cage large enough for four slim people. The metal accordion gate clanged when the operator pulled it closed and the cables groaned when it started to go up. There was a pull down leather bench and the seal of King Farouk was still mounted on the wall. He has been gone since 1952 when Nasser deposed him and gave him a one way ticket to Italy. When the door to our room was opened, the Venetian chandelier was ablaze and various shades of red, burgundy, and gold seemed to be swarming around the room. Voices from the past were beginning to talk. This was going to be fun.

If you only take one supplement take this one! It supports your immune system from the inside! Your body will thank you.