THE ANCIENT WORLD WAS CALLING

My interest in history and art history brought me to Alexandria. The city, established in 331B.C., by Alexander the Great, is one of the oldest extant cities in the world. Alexander personally picked out the site and together with his “urban planner”, they laid out the grid plan, much of which is still in place today. He turned the city over to one of his generals, Ptolemy, and then left to conquer parts of India. Ptolemy’s descendants, all Greek, ruled like Pharaohs in the Egyptian style. During the Hellenistic period, the time between the death of Alexander and the advent of the Roman Empire, Alexandria was the cultural, intellectual, and economic center of the ancient world. At times, its population exceeded 300,000. It was renowned for its palaces, baths, temples, and gymnasiums. Its lighthouse, the Pharos, was one of the Seven Ancient Wonders of the World, its famous library contained a copy of every book ever written, and the Mouseion, the Shire of the Muses, could be considered the first think tank, attracting the best scientists, philosophers, and scholars. Cleopatra, one of Ptolemy’s progeny, ruled from Alexandria over 1,300 years before anyone would hear of Cairo. 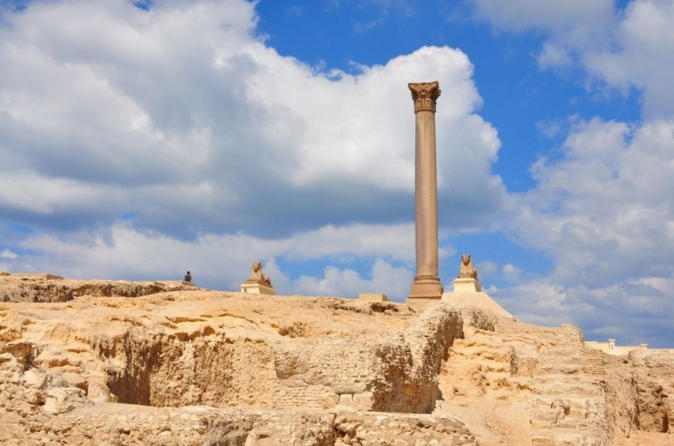 Using a quote from an unnamed source, The Lonely Planet refers to Alexandria as the “greatest historical city with the least to show for it.” All the historical monuments listed above are gone, destroyed by wars and earthquakes. Cleopatra’s city tumbled into the Mediterranean and today is being reclaimed from the sea. The library caught on fire when Caesar burned the harbor and was finished off by Christians in a 4th anti pagan riot. Today it has been replaced, on the same site, with the state of the arts library and research center. The lighthouse tumbled down in a 14th century earthquake and was replaced with a Muslim fort. I knew the evidences from the ancient past were few, the monuments victims of the passage of time. Yet with imagination, one can feel the actions and thoughts of others hanging in the air. With our own glimpse within the historical narrative, we could walk on the promontory and think about Cleopatra docking her barge before killing herself and we could walk on the roads originally set by Alexander, wondering if he was pleased with what he saw. That would be enough.

I was also interested in Egypt’s colonial period. Europeans had been coming to Alexandria since Napoleon easily defeated the Egyptian Mamluk army in 1798. However, it was not so easy for him to maintain control and he was defeated by the British three years later. Napoleon had come just a little too close to controlling the sea route to India, something that would concern the British for the next 150 years. The defeat of the French by the British is why the Rosetta stone, first found and deciphered by the French, is today in the British Museum. Napoleon’s major contribution was the 167 scholars, scientists, writers, and artists that he brought along with him. Their work may have started the fad for anything Egyptian, but it represented the first scientific study of Egypt’s past, resulting in today’s Egyptologists.

After the Egyptian army was so easily defeated by Napoleon, the French had guns and they had scimitars, Mohammed Ali, who ruled Egypt the first half of the 19th realized he needed to bring his country out of the Middle Ages. He embraced the European Industrial Revolution and with the help of European advisors, Egypt reinvented itself, making it the most forward looking country in Africa and the Middle East. Foreigners were welcomed. Throughout the 19th and the first fifty years of the 20th, the French and especially the British came in large numbers. Alexandria became the main cotton brokerage center and the port became the busiest port on the Mediterranean, attracting traders and businessmen from all over the Levant. There were communities of Armenians, Greeks, Turks, Syrians, and Lebanese etc. etc. At this time there was religious toleration and the Muslims mixed with the Jews, Christians, Copts, Zoroastrians, etc. etc. Living parallel lives, the foreign community thrived, not having to pay any taxes and enjoying the privilege of their own law courts.

French culture was highly valued and the next ruler, Khedive Ismail, followed his father’s example. Paris was rebuilt by Haussmann and he would do the same. On money borrowed from British and French banks, streets were realigned, crooked streets were straightened out and widened. Neo Classical architecture, the rage in Paris, which would be railed against by late 19th Modernists, was favored and buildings in this style began to line the streets of both Cairo and Alexandria. On more borrowed money, the Suez Canal opened in 1869. Verdi, commissioned by the Khedive, wrote the opera Aida to celebrate this event. In order to impress Empress Eugenie, the Khedive borrowed more money and built her a palace, today the Marriott Hotel. The Khedive embraced everything European and Thomas Cook set up his first tour to Egypt, the beginning of the Egyptian tourist business, which now experiences 10 million tourists a year.

While Alexandria was developing, once again, into a vibrant cultural center and a cosmopolitan, international city, the Khedive ran out of money and the banks called his loans. In order to stave off economic disaster, so they said, the British stepped in and took over. They did not turn Egypt into a colony but instead called it a Protectorate, behind every Egyptian official was an English advisor and plenty of British staff. The British presence grew and they created their own social life on foreign soil,. Egypt became their own play ground hosting women’s organizations, garden parties, teas, and a highly fashionable “Winter Season”. In a manner, similar to other British colonial cities, they turned parts of Alexandria, as well as Cairo, into their own image, establishing elegant villas, gardens, parks, private clubs, restaurants, pastry shops, tea shops, and hotels, which catered to all their needs. For many, Alexandria was the most special. They wrote memoirs describing their privileged life, most filled with nostalgia for a better time. After all, they wined, dined, and drank champagne, partied until dawn and the Egyptian people cleaned up their messes. If you were not Egyptian, it sounded like a magnificent time to be there.

One of the most evocative authors to write about Alexandria was Lawrence Durrell. In the summer of 1968, I read Laurence Durrell’s Alexandria Quartet. The period is World War II and the years leading up to the war, and as the title describes, these are four novels set in Alexandria. When the Nazi’s took over Greece, Durrell had been living in Corfu, was evacuated to Egypt where he took a position in Alexandria with British war office.  He spent three years in Alexandria but wrote these novels after the war. The first book, Justine, made into a not so good movie, sets the story line, introduces the characters and in the remaining three books, Durrell’s passionate characters reveal more of their lives and retell the story from their own point of view.

At that time, and I reread the books before we left, I was captivated by his artistic style of writing, each paragraph, a canvas painted with sensually expressive words that draw you closer. I wanted to visit the milieu within which his characters lived out their lives. I wanted to walk down the streets in his world, stroll along the cornice at twilight. Sit in his cafes and bars, soak up the atmosphere of this highly cosmopolitan city he created. Even though his streets, cafes, hotels, and sections of town are real to the city, I knew his exotic Alexandria existed only on paper, the results of a creative mind. He abstracted the city, used it as a backdrop, a stage on which he allowed his characters to evolve and in so doing the city, with its heady mix of multiple nationalities and it passions, became more of a concept than a reality. I knew we could not visit Lawrence Durrell’s Alexandria any more than we could drive to Atlanta and visit with Scarlet and Rhett.

NASSER’S EGYPT FOR THE EGYPTIANS

In the 1940’s, forty percent of Alexandria’s 300,000 population was foreign. Many had lived there for generations and even though they might not have been Egyptians, Alexandria was their home. When Nasser came to power in 1952, he let loose a strain of xenophobia that is still mastacizing today. Similar to the Christians burning pagan books and calling in a new era, Nasser proclaimed Egypt for the Egyptians and along with King Farouk, he threw the foreigners out of the country, taking over their business and often forcing them to leave with the clothes on their backs. If the ancient world lost its bricks and mortars then Alexandria, as it had been for Durrell and the expats, had its former soul yanked out, replaced by a conservative society steeped in religion. Consumption of alcohol was banned, bars were closed, and their women dressed in black while the morality police roamed the parks. The freewheeling economy was replaced with socialism. The Egyptians took back control of their own country, conservative Islam retrenched and all signs of foreign influence replaced with Arabic. The Russians became their best buddies and the French, rue, became the Arabic, sharia.

A traveler should arrive with a sense of wonder and levels of expectation, otherwise, why leave home. But we were not prepared to the extent by which cosmopolitan Alexandria was finished, replaced with an inward looking closed minded people. Except for the library and maybe a few hotels, there are no new buildings and those that are standing are deteriorating with little sign of maintenance.

Many of the famous cafes lining the Corniche, the famous road following the contours of the Mediterranean Sea, have closed. Those that are still open are in disrepair, peeling paint, dirty smeared windows, chandeliers, statement of former glory, cloaked in grime with missing bulbs. Expresso machines have been replaced with Nescafe and white tablecloths and starched napkins as scarce as a cold beer. One of Mahfouz’s chacters went to the Café DeLa Paix before being killed and Cavafy, the famous poet Greek/Alexandrian poet who connected the city to it Hellenistic past and made the city into a mythical land, worked above the Triaon Cafe, today, both faded glory beyond recognition.

The new library with its extensive database represents a nascent cultural renaissance bolstered by theater groups and literary clubs. It is said the city is being driven by a youthful spirit. Time will tell. Nevertheless, dirt, filth, lack of maintenance in Cairo was one thing, but after all Alexandria, with is glorious past, should know better.