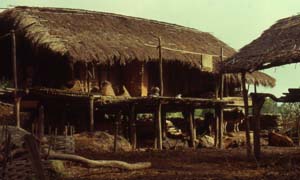 Trekking in Eastern Nepal along the Arun River valley one can admire fascinating changes in house architecture as one progresses from the lower Himalaya toward the elevations where Arun breaches the High Himalaya on its way from Tibet to Nepal.  One of the dominant Ancient Nepalese ethnic groups that populate the Nepal Midlands in this region are the Rais. Generally, the Rais have settled west of the Arun River in altitudes between 4,300 and 7,400 feet above sea level, however, their settlements can be found also on or very near the bottom of the Arun gorge, in altitudes even less than 1,000 feet. Here the Rai houses are constructed on stilts and woven out of bamboo and reed. In some instances the Rai settlements can be quite compact, with the porches of the neighboring houses practically touching and narrow passages lead between the houses, but for the most part, Rai low river valley villages are dispersed. Packed with mud like the entire house floor, including the front elevation of the house, the porch is a viable work area. As the structures are only one story high, storage is partially provided on the outside of the house. Cattle and other livestock are typically kept below the house. A special thrashing and milling area is built usually in close vicinity of the house. 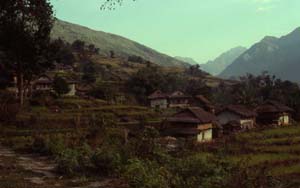 Another house type is built by the Rais higher on the west bank of the Arun, in a region immediately south of the Lhomi Tibetan

s, but even here the altitude where they settle does not exceed 5,000 feet above sea level. Although bamboo is still used abundantly, particularly in the construction of the animal shelters, the important building material is stone. 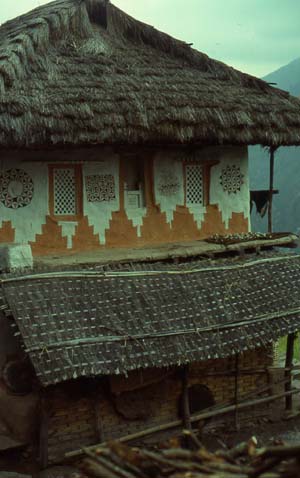 The facades of the houses are frequently richly decorated with geometric ornaments and “flowers of luck” designs, and images of gods as expression of worship to reward the house with prosperity.

Some of the houses have adjacent to them fine fenced vegetable gardens. Typically the houses are roofed with thatch, although bamboo mats may occasionally be used. In villages above 6,000 feet, as is the case on the northern side of the Salfa Phedi pass, separating the watershed of the Arun from that of the Dudh Kosi, the roofs of the Rai houses are covered with wooden shingles. 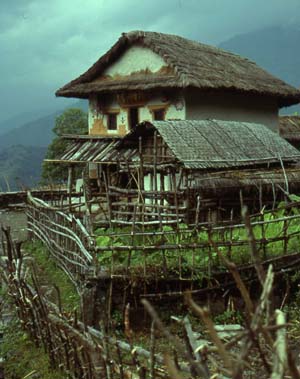 During the civil war in Nepal, a conflict between government forces and Maoist insurgents, which lasted ten years and finally ended with peace agreement in 2006, it was virtually impossible to travel in Eastern Nepal as this area was controlled by a number of bandit groups many of which posed as Maoist rebels but were most set on ambush and armed robbery than selling communist ideology and collecting rebel-sanctioned donations prevalent at that time. Today once again this region is open and may be used as a lesser frequented route to access the Sherpa region of Solu-Khumbu to the north-west from here.