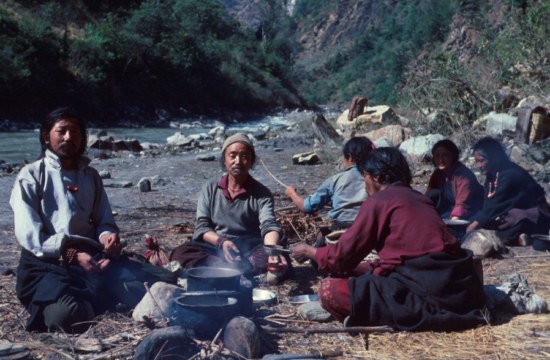 The majority of visitors trekking in Nepal head on up to the High Himalaya seeking the high altitude trails such as Annapurna Circuit or Everest base camp trek. But lower Nepal Himalayas, namely the Midlands, present lots of opportunities to experience the way of life of the Nepalese people. In order to choose the best time to travel you should be familiar withe the annual life cycle of the local people, and plan your trip accordingly.

The way of life in the Himalaya is focused around the growth of the crops. Ordinarily, to produce sufficient crops, to have enough to eat all year round is the prime concern of the people. In the greater part of the Himalaya, the farming year starts approximately in April, in other words before the onset of the summer monsoon, although it differs from altitude to altitude and from one region to the next. It is at that time that the fields are plowed for the growing of maize, the staple food of the mountain people. Next the fields are plowed, then fertilized by goat and cattle manure, plant food made of leaves and grass, and last the seeds are sown. After that maize, paddy, usually planted in seed-beds already in May, is transplanted in June or early July into the irrigated fields. Thereafter most of the summer is expended taking good care of the growing crops, attending to crucial duties as weeding and keeping out cattle. It may also be a time period you could find trekking in places which include lower Solukhumbu or along the Arun river valley rather fascinating, regardless of the rains. After all it is warm and nature is green and lush.

In the autumn, as soon as the crops are ready to be cut, the harvest, the key phase within the annual life cycle takes place. The freshly cut crops are first sufficiently dried, then threshed by cattle or with a stick to separate the kernels from the stem, roughly winnowed, and ultimately spread out on reed mats before the house or above the hearth and left there to dry completely. All of the harvesting chores finished, and with the fields ready for the the winter season crops, the villagers now have a long winter season ahead of them to survive, hoping that the crops they saved will be enough to last entire winter. Autumn is the prime Nepal tourism season.

Winter season is the time when the people of particularly the northernmost areas depart for the bazaar villages in the Midlands or walk as far south as Terai and Kathmandu, in search of barter in an effort to supplement their insufficient crop supplies, or simply in search of commodities which need to be restocked only once a year. Thus during the long winter months, the Himalayan trails teem with a wide variety of peoples of all Nepal ethnic groups. Winter time period, particularly late December to end of February, is usually dismissed by tourists due to short days, snow and cold, but with a knowledgeable guide and the right support it is e
a wonderful chance for trekking Nepal and have the country to yourself.