Trekking in Eastern Nepal Himalayas is once again possible and trekking into the upper reaches of the Arun River offers an insight into the lifestyle of the Lhomi Bhote, the Tibetan population group that occupies this remote part of eastern Nepal. The diversity of house types built by the Tibetan population groups in the Nepal Himalaya from one area to the next is quite fascinating. The Lhomi Bhote, whose villages are found as far north as where Arun breaches the high Himalayan massif, build themselves houses that range from all bamboo and bamboo matting type of structures elevated on stilts of tree trunks or stones, to all stone houses with wooden shingles, or even houses of solid timber. 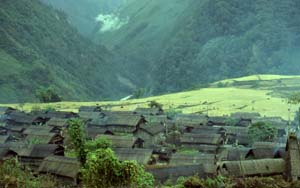 The Arun River, one of the greatest Himalayan Rivers, originating in Tibet, breaks through the high Himalayan range at an altitude of only little more than 4,000 feet above sea level.  High above its deep gorge, affected significantly by monsoonal rains, are situated the villages of the Lhomi Tibetans. The Lhomi villages are compact settlements, sited on broad ledges or on steep slopes. 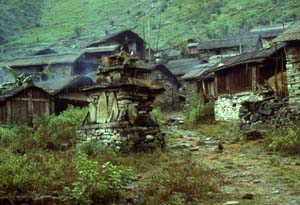 The houses in the villages built in the lowest elevations, around 5,200 feet above sea level, are constructed on stone stilts or on all-stone foundations. The walls are made of stone or quite often of woven bamboo, which is also used exclusively in the covering of the roofs. 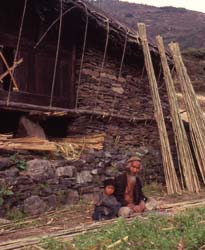 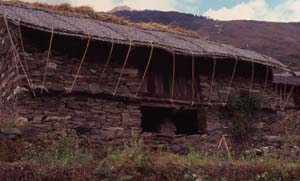 In higher elevations, stone begins to predominate in the house architecture. In the highest situated Lhomi villages, in altitude over 8,000 feet, however, timber now appears, and at times solid timber houses erected on stone stilts may be found.  Bamboo, which is cut in typical stalks that are split into thin strips then woven into mats, continues to be utilized in the coverage of the roofs. 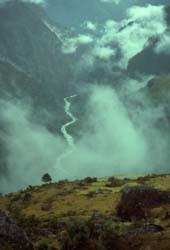 The Lhomis believe their ancestors came from Tibet.  Actually, Lhomi is not a tribal name, but a Tibetan expression for “lowlanders”, a name which the people apply to themselves in view of the fact that the region of their present habitat is located to the south of Tibet proper.  More correctly, the Lhomis of the Sie sollten au?erdem in der Lage sein zu treffen, stehen, verdoppeln und auszusteigen – es ist schlie?lich ein echtes Vegas-Casino!Spielen Sie Live Baccarat onlineWenige Spiele sind in der Lage, Casino-Spieler so in Aufregung zu versetzen wie die Quintessenz,?sozusagen die Creme de la Creme der Kartenspiele–Baccarat. upper Arun are known as the Kar Bhote. 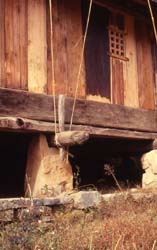 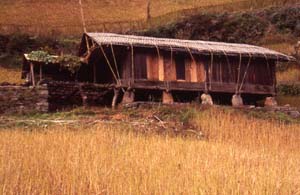 They are self-sufficient farmers with trade playing only a minor role in their lives.  The style of their dress is similar to other Tibetan population groups living in the Nepal Himalaya, although the generally warmer climate of their native region enables them to go barefoot for the greater part of the year. 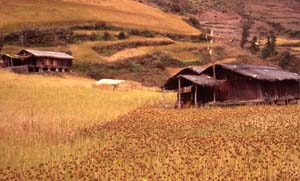 In addition to wearing unique small cloth caps embellished with Indian silver coins, the Lhomi women, as most Tibetan women like to adorn themselves with silver ornaments and necklaces of coral, amber and turquoise beads. 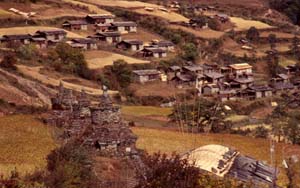 The Lhomis still claim to be of the Buddhist religion, however, their monasteries are in a tragic state of disrepair, Buddhist Lamas are few, and the contact with Tibet, the source of their religion, has been broken since its 1959 takeover by the Chinese. Well rooted in their religious practice are elements of a pagan form of a pre-Buddhist religion, which includes animal sacrifices, and worship of spirits and patron deities. Nevertheless, nearly every village harbors several chortens, Buddhist stupas, and mani walls which bear testimony to this region once being a place where Buddhism flourished.

By the way, when in this region, consider adding a trek to Makalu base camp and the beyul valley of Barun river.