Guizhou is one of lesser-visited provinces of China. This is largely due to its remote mountainous character and bad roads, especially in its southeastern corner, where a number of fascinating ethnic minorities such as Bouyei, Sui, Hui, Zhuang, Miao and Dong are found. Although much of these ethnic groups live in poverty, Dong relatively prosper and construct intriguing compact villages of truly remarkable architecture. Of all the Dong villages, Zhaoxing has been hailed as the most beautiful village and is certainly quite picturesque.

Set in a basin when approached from either direction and viewed from the surrounding hillsides, Zhaoxing skyline strikes as coherent blend of rooftops above which protrude unique pagoda-style towers, five of them in all. Interspersed throughout the village the drum towers were built by each clan as if one per neighborhood. The pagoda tiers, intricately carved, mounted atop massive timber columns, are decorated with village life images and harbor a drum which is beaten to summon villagers to a meeting, warn of fire and in the old days sounded alarm when the village might had faced an approaching attack. Although the benches below the drum tower serve as a gathering area to hold village meetings, villagers use its soothing shade to rest, play cards, games and chat; the drum towers indeed thus constitute an urban design element that can be incorporated by any contemporary culture. 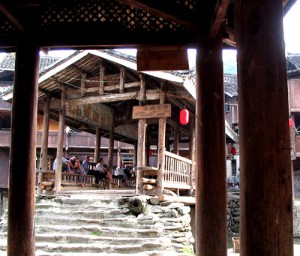 The dominant architectural element of the village are the houses. As the drum towers and the covered bridges the Zhaxing house architecture uses no nails and the structures are built entirely of notched timber post and beam construction. The skeleton of the structure is completed first and the rest of the house follows. It’s astounding to see that a massive three-storey structure can sit on simple flat stone footings often as if haphazardly set inside a steep hillside. The Dong vernacular style of architecture undeniably belongs to one of most fascinating tribal architectural styles found anywhere.