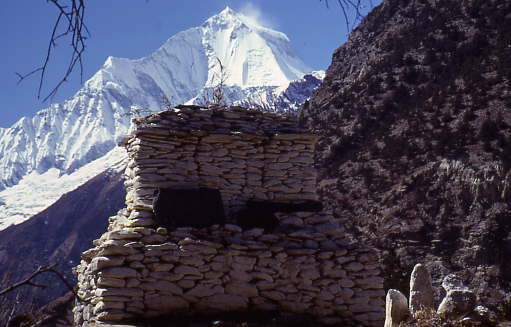 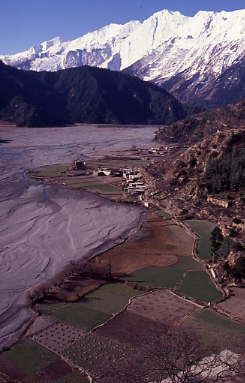 Midway between the Bhotia, or Bhote, Tibetan ethnic groups starting with the Baragaunle Bhote villages north of Marpha and ending with the former kingdom of Lo, the Mustang Kingdom of upper Kali Gandaki south of the Tibetan border, and the Chetri, Magar and Gurung villages downstream south of Tatopani, the last pure Hindu village, there are villages of the Thakali people.

Located just about where the Kali Gandaki breaches the chain of the High Himalaya, with the Annapurna towering high above directly to the east and the Dhaulagiri to the west, located only at some 6000 feet above sea level, the Thakali villages constitute a clear transition it the cultural continuity along the watershed of this major Himalayan river valley.

Today the Thakali villages exude mixed traditions, a clear mixture of Hindu and Buddhist elements. When it comes to looking at the house type build by the Thakalis and the man-man physical characteristics of their villages as such one feels being already among the Buddhist populations groups further north. But close look at the dress of the Thakalis and the story told is of other aspirations. 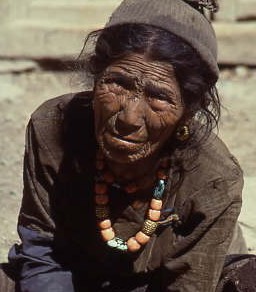 To the Thakalis themselves any connection to the Bhote and Buddhists is unwelcomed association that they have managed, in their mind, to shed beyond doubt. 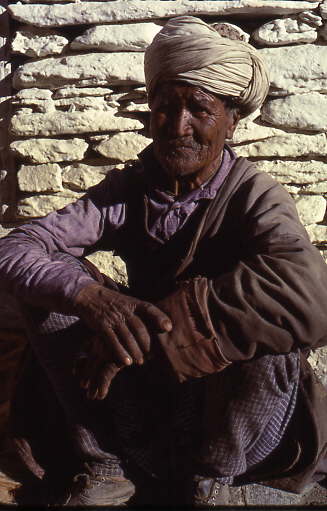 The Thakalis have all the characteristic Mongoloid features, and their language is a special Tibetan dialect, hence relation to the Buddhists further north is undisputable. Regardless of their exact settlement in the Thak Khola, the Thakalis prospered since the mid-nineteenth century when they were awarded a monopoly over the salt trade with Tibet.

Tukuche, the largest Thakali village, in translation meaning something like the “Grain Market Place” (tuk-grain; che-flat place), has until late 1940s figured as the principal market town where salt from Tibet was bartered for grain from the Midlands and Terai. Unfortunately, due to the Chinese invasion of Tibet in 1959, the salt trade had completely ceased, constituting that today Tukuche is essentially only a relic to its once prominent past.

Although the Thakalis have since late 19th century conscientiously tried to establish a link between themselves and the Malla kings of Jumla in western Nepal, proclaiming themselves thus as Hindus, in order to raise their social status because Nepal as monarchy was essentially a Hindu kingdom, and today most with the exception of the very old have adopted Nepali style of dress, women wear sari and man topi (Nepali cap), one brief glimpse of the region of their settlement attests to nothing but an undoubtedly once great Buddhist past. 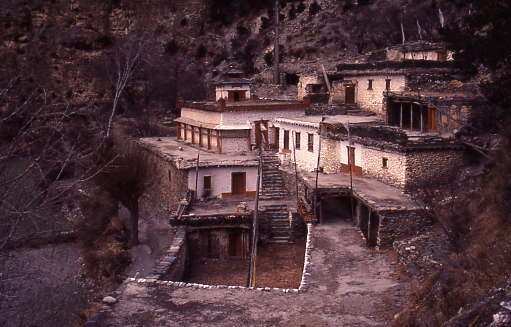 Near and in practically every Thakali village can be found long mani walls and chortens as well as Buddhist monasteries. 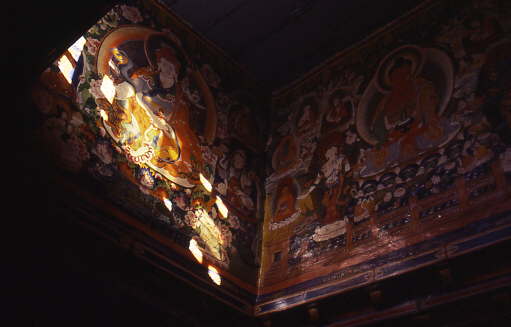 The Narshang gompa above Khanti, its skylight window adorned with fine frescoes of the traditional Buddhist imagery, including the image of Padma Sambhava, otherwise also called Guru Rimpoche or the Precious Master, the apostole of Buddhism in the Himalaya and Tibet, with the Kyupar gompa in the vicinity of Tukuche, have always belonged to the more renown of the Thakali Buddhist gompas. Two of the other more prominent Buddhist gompas of the region are the monastery of Ku-tsap-ter-nga, with a large covered corridor used for the ritual perambulation, surrounding its courtyard, and the gompa of Tsherok. And the Rani gompa in Tukuche is probably the oldest Buddhist gompa of the Thak Khola, believed to be built around the beginning of the seventeenth century. Though Bon-po influences at one time were equally as strong in the area, today most of the Bom-po gompas are in a tragic state of collapse, including the Bon-po gompa of Nabrikot. 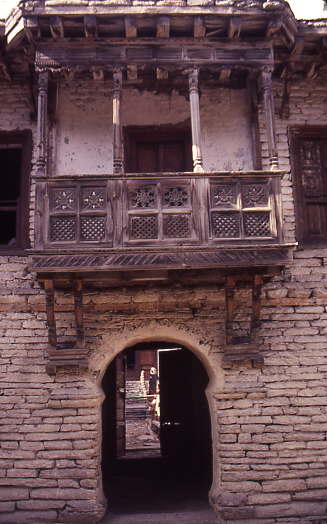 In all, the Buddhist heritage of the Thakalis has been sustained by only a handful of old monks and nuns that try to maintain the upkeep of the gompas as well as the Buddhist ritual. Were it not for the Panchgaunle people whose villages are found immediately north of the Thakali area of villages, who try to maintain the gompas and hold some of the traditional Buddhist festivals and ceremonies, the Buddhism in the Thak Khola would have died by now completely.

Although the Panchgaunle people consider themselves to be Thakalis, they are not Thakalis. The biggest village of their region is the village of Marpha, a compact village of narrow, cobbled lanes from which the courtyards of the houses are entered, in architectural style essentially identical to those of the Thakalis including the flat roofs, edges of which in Marpha are lined with neatly stacked supplies of firewood.

The Tibetan house types of stone with flat roofs have inspired the architecture of the Thakalis likely from the very beginning when they settled along the Thak Khola, however, the Thakalis have perfected this house type to a higher standard of design than have their Baragaunle neighbors to the north. The flat roof, suitable for drying of grains, upper level reached via the characteristic notched tree trunk ladders, is repeated in the design of each and every house in Thak Khola. 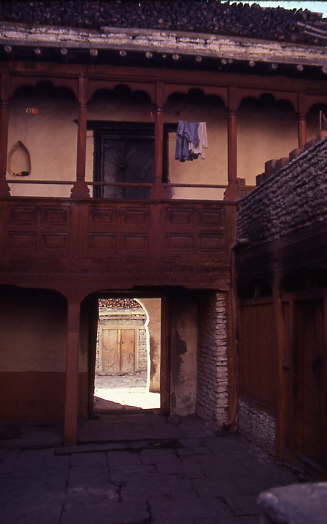 Another design feature, always present in the Thakali house, is the enclosed courtyard with usually a fodder barn and an animal shelter on the ground level. Undoubtedly the best designed Thakali houses are found in Tukuche, the former marketplace center of the extinguished salt trade and seat of once the richest traders.

Kitchen, too, would be usually located on the ground floor, abounding in a variety of shiny brass pots displayed on shelves around the room. On the upper floor would typically be found the sleeping rooms, family chapel room, additional storage rooms as well as the main living quarters including another kitchen area, typically containing a ceremonial fire pit. The ceremonial, ornamental fireplace, is put up by the Thakalis only symbolically, and no fire is ever lit in it.

In the finest of Thakali houses of Tukuche the second floor rooms were entered off a fine wooden gallery, typically built around the entire interior perimeter of the house. Structurally, timber would always be used extensively, and a uniquely cut and colored T-post, serving the function of a ceiling supporting structural member, is found in every Thakali house. 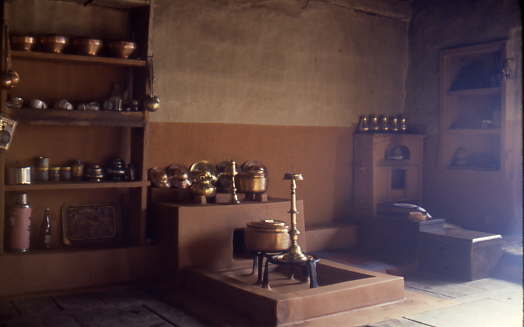 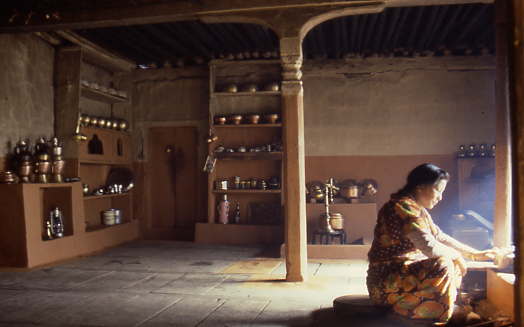 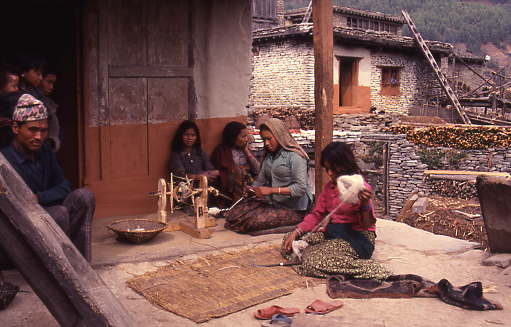 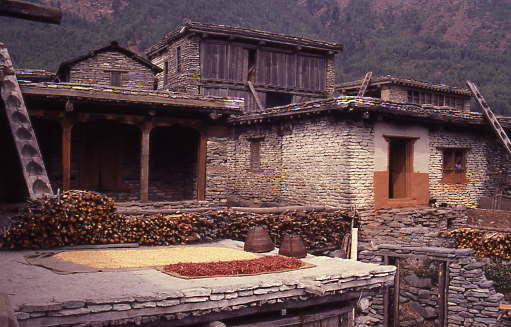 Whether you are a trekker or have a deeper interest in the cultural diversity of Nepal, Thakali villages of Thak Khola offer a fascinating slice of the remote part of the Himalayas.