The main trekking season in the Nepal Himalayas is beginning now. October to early December is the main season for trekking in the Sherpa Solu – Khumbu region, the Annapurnas, Langtang Himal, Himalchuli and Manaslu as well as Kanchenjunga.

While springtime, May to early June, is an ideal time for ascending Mt. Everest and some of Nepal’s other prominent peaks, fall generally offers clearer skies for trekkers. In the spring monsoon is fast approaching and skies are always hazy though it is warm even in high altitudes thus a best period for summiting Everest. October and November is the ideal season for trekking.

Great number of trekkers in Nepal book tours from established Nepal tour and Himalaya trekking operators in the United States or Europe well before departing for their trip. Many trekkers, however, come to Nepal entirely on their own hoping to arrange trek support in Kathmandu. So what are the costs associated with hiring a Sherpa in the Nepal Himalayas? 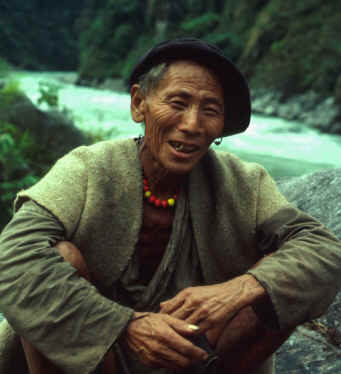 Minimum cost of a Sherpa is Rs. 650 (Nepalese rupees), that’s about $10 per day. It’s important to note that this rate applies for the service of a Sherpa staff, a camp hand, porter or a cook possessing essential experience having worked with trekkers in the past, though the rate does not include allowance for his lodging and meals namely if staying in local lodges. Those expenses will have to be covered by the trekkers in addition to the Sherpa basic rate.

Tour operators will have to also pay for the Sherpas’ health insurance (rates start as low as Rs. 3500 ($50) per person) and in some instances, for example on certain climbing expeditions, the operators must also provide all necessary personal gear for the Sherpa, from special boots to down jackets especially if they will be working in exceptionally high altitudes.

Experienced Sherpa mountain guide is referred to as “sirdar” and his will cost is well above the mentioned rate for Sherpa staff. Top expedition Sherpa sirdar can earn over hundred dollars per day, even more, especially on large expeditions when he manages a sizable team of other Sherpas. The head Sherpa guide or sirdar assigns and coordinates responsibilities of the entire expedition support team, hires and pays the porters, pack animals and their caretakers and makes all the necessary decisions regarding routes and camping sites.

While Sherpas act as essential porters on high altitude treks such as ultimate Everest treks to Gokyo Ri, Kala Pattar, Chukung Ri and similar destinations, in lower elevations of, for example, the Annapurna circuit trek up to Manang along the Marsyangdi River valley or up the Kali Gandaki River valley to Muktinath, the Sherpa guide will hire local porters from other Nepalese tribes, namely Limbus, Rais, Thamangs or Gurungs. Their daily rates may vary.

All Himalayas expeditions will also routinely employ the services of a yak, an absolutely essential pack animal for trekking in high altitudes. In 2008 yak daily rate was Rs. 900 ($13); in 2009 minimum daily tariff is Rs. 1200 ($17) per day. Of course yaks must be handled by a yak driver, their caretaker, and his minimum daily cost starts at Rs. 1200 ($15) per day.

Aside the Sherpa and pack animal expenses trekkers in the Nepal Himalayas will each have to get a trekking permit issued for the specific region where they will trek. Himalayas trekking permit for Solu – Khumbu currently costs Rs. 2750 ($ 40).

Additionally, as most trekking areas in the Nepal Himalayas are now within boundaries of national parks trekkers must also pay national park fees, typically Rs. 2000 ($30).

Over and above the noted costs trekkers will have to pay a daily tariff that includes full expedition support, costs that will include quality sleeping tents and mats, dining tent, toilet tent, and all the necessary camp gear, kitchen gear, food provisions and cooking fuel, buy their own health and evacuation insurance as we as pay for any other extras not mentioned above. All in all the quality of all Himalayas expeditions will not be the same and much of any trekking tour’s true success depends on the experience and leadership abilities of its sirdar, the Head Sherpa guide. In this regard, before you commit to booking a trek lead by a Sherpa team, a reliable Nepal Himalayas client testimonial will be essential to know your group will be guided by a true professional Sherpa guide.