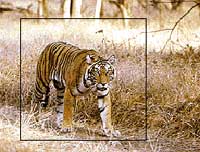 In 1973 the Indian Government launched Project Tiger, a tiger conservation project to control and supplement the dwindling population of the Royal Bengal tigers in India. Over the years the Project Tiger has become one of the most successful wildlife conservation efforts in India. While initially only nine tiger reserves were set up under the Project Tiger, today there are nearly 30 tiger reserves all over India. Although not all tiger reserves, wildlife and national parks in India offer equal chances of seeing a tiger in the wild, there are a few where one can take tiger safari tour and have a good opportunity to actually see the tiger.

Bandhavgarh, Kanha National Park and Pench National Parks are the finest wildlife reserves when it comes to chances of encountering the magnificent Bengal tiger in wild. Located in the hills of the Vindhyan Range in the central Indian state of Madhya Pradesh, Bandhavgarh National Park is considered to have one of the densest tiger populations of any wildlife reserves in India, though since 2006, when Kaziranga National Park in Assam of north-eastern India was too declared a tiger reserve, that crown is now claimed by Kaziranga. Considered one of the best parks in Asia, Kanha National Park is hailed as providing the best opportunity for seeing a tiger namely on account of having the largest number of tigers, said to contain over 400 of these predators.

Bandhavgarh, Kanha, Pench and Panna National Parks can be included in your tour of the Khajuraho and Varanasi region. Pench and Kanha National Parks are best accessed from Nagpur, easily accessible by air from Delhi, Mumbai or Kolkata.

Located in the foothills of the Himalayas is the majestic Corbett National Park, once a popular hunting ground of the British. Corbett NP became the first national park to be established in mainland Asia and the first sanctuary to come under Project Tiger. It is best visited as part of your Northern India itinerary, where it can be ideally tailored into your Rajasthan – Varanasi – Indian Himalayas itinerary.

Another option for visiting Corbett National Park is to combine it with a tour to the hill state of Uttarakhand, to Garhwal and Kumaon region. Here it is best added to your trip to Haridwar – Rishikesh – Almora – Nainital itinerary.

One of the premier parks of India and also established as one of the best for a chance of seeing a tiger has become Ranthambore National Park in Rajasthan. Typically visited as part of so called Temples, Tigers and Ganges itinerary that packs in the best of Varanasi and Khajuraho first and the tour visits Ranthambore en route from Agra to Jaipur. 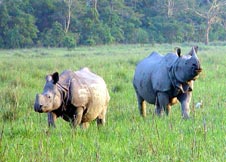 Last but certainly not least recommended for seeing the tiger is Kaziranga National Park. Although relatively small, Kaziranga NP is among the best of India’s wildlife parks. As a result of a truly remarkable success story of conservation of the One Horned India Rhinoceros, Kaziranga National Park got the recognition of the UNESCO World Heritage Site List in 1985. Kaziranga NP is best visited as part of Assam – Meghalaya itinerary, either by flying into Guwahati, Dibrugarh, Jorhat or Shillong.