With Carlos Alberto behind the wheel urging his KIA onward, negotiating the mountainous roads as if he was Juan Pablo Montoya, the famous Colombian Formula One driver, we reached Salento in considerably less than the usual one hour driving time from the Valle del Cocora.

Salento was established in 1850, making it one of the oldest towns in the coffee zone. Simon Bolivar, the famous Liberator, passed through this area with his men and assessing the roads to be deplorable, he ordered them to be rebuilt. As nothing happens fast around here, it took twelve years before a prison work gang showed up to improve the road system and by that time Bolivar was dead, buried and reviled. If their sentences were remitted due to good work, under the table payments to the boss man, or whatever, the prisoners were given a piece of land to farm and stayed in the area. The others, who were not so lucky, found themselves installed in a new prison made just for them nearby. As per their custom, the prisoners were soon joined by their families. People attract more people and when a census was taken in 1864, they managed to tally up 581 souls. Apparently, this was enough and the community was officially considered a municipality. This modest beginning did not encourage too many growth spurts as the population today comes in slightly over 4,000. Similar to Australia, expressing pride in one”s founding ancestors must mean acknowledging their dubious vitae. The town was named after Salento, located on the “heel” of the boot of Italy and famous for being colonized by mainland Greeks in the 8th B.C. 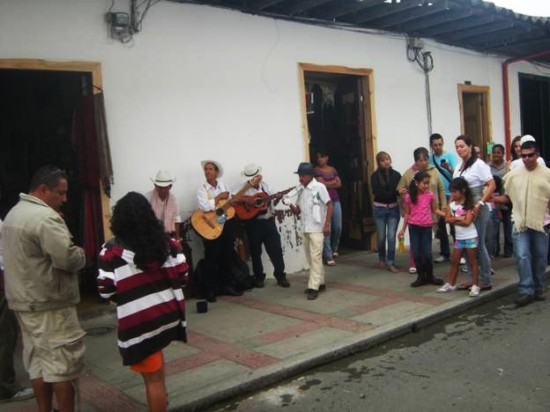 AFTERNOON IN SALENTO
Carlos Alberto drove directly to the plaza, requiring several turns around the block until he could find a parking space. As he zipped into a recently vacated narrow slot, we were immediately welcomed by a “meter maid”, apparently the first sign that it is Salento and not Filandia that is receiving the bulk of the tourists. He parked between two brightly polished Willys Jeep presided over by their owners. Their machetes, sheathed in woven leather cases, dangled from their belts and their sculpted bodies, with each muscle the product of their life of labor, hidden beneath their loose white shirts.

It was late afternoon and the plaza was still packed with people, tourist and locals both enjoying the sunny afternoon. To Donald and me it felt like early spring. In a manner similar to Filandia, the buildings have been whitewashed and all the wooden trim has been covered in bright festive colors. This is when we learned that the local governments have been making paint available to the people free of charge. Striped tents, filled with long tables, lined one side of the plaza and woman were selling home cooked food and plenty of beer. With few exceptions, the buildings surrounding the plaza were historic, especially since there had been no reason to tear down the old to replace it with the new. The bank building was the most ornate and the old hotel appeared to have been turned into a charming bed and breakfast. 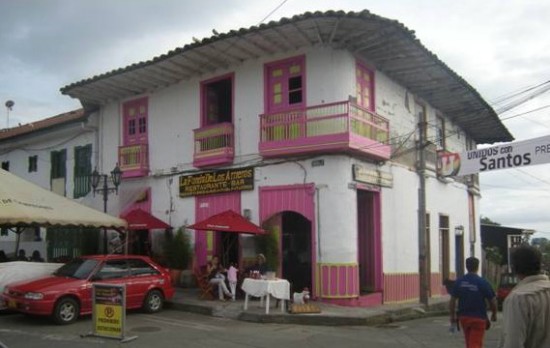 Donald and I stepped into the Catholic church holding up one end of the plaza. While the Conquistadors arrived in the pursuit of gold, the Catholic Church turned up to save souls and today 90% of the country is Catholic. This church was similar to the majority of the small churches we visited. There was a single aisle down the middle with side chapels architecturally forming the pattern of the cross. The parish was prosperous and the high ceiling was constructed out of wood and shaped like the keel of a ship. Light flooded in through the tall windows giving the place a spacious feeling. The large crucifix above the main altar held a pale Jesus while the Jesus on the side altars had a dark complexion. When making a comparison, Christ always seemed to have had an easier time of it in the Italian churches than in South America. Here he truly suffers as blood pours out from the crown of thorns and the lashings on his body.

Johnny escorted us down side streets where many storefronts had been turned into gift shops, each with a similar selection of trinkets. More so than Filandia, the town has given itself over to the tourist trade. Today, they are not thinking about reeling in yanquis dollars as much as the Colombian peso. We followed Johnny into a gift shop owned by his friend to enjoy a glass of homemade coffee wine that he makes in the back of his store. He welcomed Johnny and greeted us with “buenos tardes”. He did not need to speak English for us to realize he was a most charming man, not quite elderly, but on the verge. I wanted to know what had been in this store before it became a gift shop. He told Johnny it had been part of their home and now they live in the back part where he made a small addition. His children were working in Bogota, and since it was just he and his wife, he opened his store to have something to do. He winked at Johnny and then gave us a knowing smile, as if we too were partners in his secret, and reaching behind the counter, first tilting his head as if listening for the imaginary drum roll, he pulled out a red ceramic jug. It was one of the traditional kind we had seen earlier that morning in Filandia. With a flourish worthy of a sommelier pouring a grand cru, he filled three juice glasses with a dark cherry red substance. Johnny took his aguardiente style, in one gulp, while Donald and I sipped slowly, trying to figure out the taste. It was a perfect blend of full bodied coffee and a sweet red wine tasting of cherries, a tasty liqueur for after dinner drinking. Unfortunately, it was only available in a red ceramic jug, making it too unwieldy to take home. Complimenting his wine, we told him it was fantastic and he agreed saying it was made by the gods with help from his grandmother”s recipe. I wanted to purchase a selection of the mini ceramic Willy Jeeps loaded down with brightly painted local produce and the little mules carrying sacks of coffee beans. When I put the money on the counter, he pushed it back and from Johnny”s translation, we understood these were his gifts to us as a way to remember him and his town. Leaving his shop, we felt we had made a friend and had enjoyed another traveler”s moment. 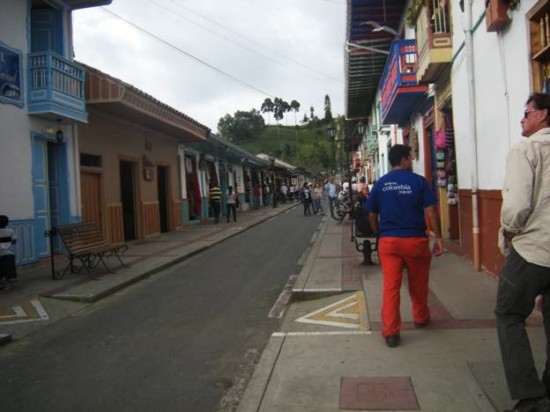 Back on the street, an old timer”s band was performing on the sidewalk featuring a shorter version of Juan Valdez singing and doing something that resembled an “old soft shoe”. His cronies were backing him up with the refrain, two guitars, a hand drum and a guacharaca, which looked like a stick being stroked with a three prong fork. The large tin cup they had placed on the grown was being filled up by groups of Colombian tourists.  Continue Reading >> 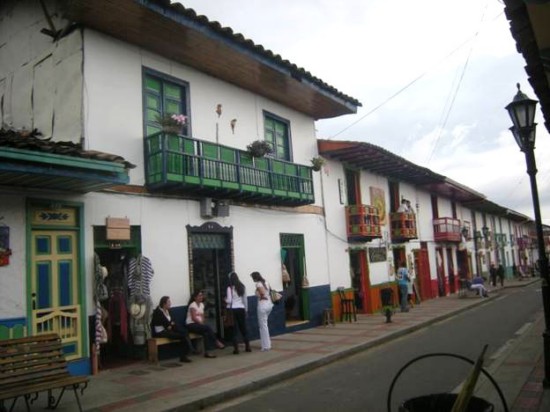