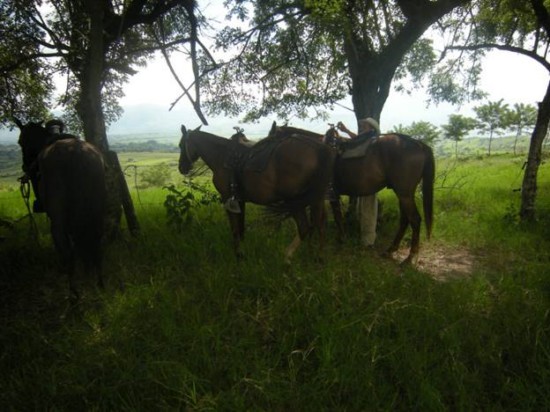 JUAN MARTIN REDEEMS HIMSELF
The mysterious man with the shovel was Juan Martin who, along with his wife, owned the tour company that had planned our excursions in the coffee region. According to Johnny, he did not speak English, maybe explaining why he never introduced himself to us.

The third event in our trifecta was a “horseback journey through El Valle del Risaralda” with a promised surprise at the end. As per the program, we would drive to a hacienda fifteen minutes away from the hotel where we would find horses and the trail that led through the valley.

The hacienda turned out to be a 7,500 acre spread complete with a horse breeding farm. We pulled up to the stables and directly in front of us, framed by the dust and the stable hands, was a young horsewoman directly out of a Goya painting sitting astride a black horse as shinned and polished as she was. Getting out of the car, the only attention we received from her was a disdainful smirk and with the flick of her wrist, she and the horse were off. Apparently, she belonged to the horsey set and Donald and I dressed in jeans, tee shirts, wearing ball caps did not meet her aesthetic.

We were introduced to Pedro, the man in charge of our ride. Johnny had told us about him. His grandfather was an Indian and had grown up in the mountains. He was being trained by the village elder to become a brujo, a kind of spiritual magician who can cure animals as well as people and when necessary, can call up the spirits of the dead. They taught him to smoke a puro, a kind of cigar whose fragrance can ward off evil spirits or materialize the good ones. When called to action, a brujo first drinks ayahuasca, a concoction that induces a trance, and then he is ready to foretell the future or make decisions for anything that needed to be decided. However, the Catholic nuns kidnapped his grandfather and placed him in a mission school before his training was completed. As a result, he only learned how to contact the spirits from the beyond but when they showed up, unfortunately, he did not know how to command them to do anything further. After that, the spirits would just hang around until they got bored and then go back to the beyond. In 1953 during the time of La Violencia, that insane period of Colombian history between 1948-1957 when Liberals and Conservatives tore themselves apart leaving 350,000 people dead, his grandfather was kidnapped again. This time he was forcefully conscripted into the army and was never seen again.

Pedro”s background, just like the country, is a jumble of ethnicity, a mixture of those who were already there and those who showed up later. His grandfather, an indigenous Indian, married a black woman, whose ancestors arrived as slaves from Africa. Their son married a woman who, even though illegitimate, claimed to be 100% Spanish. She maintained her lineage, dubious at best, stretched back to the Conquistadors. It was only when she exhibited a passion for gold jewelry that they believed her. When you do the math, their son Pedro is ¼ Indian, ¼ Black, and ½ Spanish.

Regardless of the blood coursing through his veins, Pedro is totally campesinos. Just as Juan Valdez loved his mule, Pedro loves his horses. He feels awkward walking and would stable his horse in his house except the extra bedroom, that had once belonged to his daughter, is presently occupied by his wife”s pet pig. When we arrived, Pedro, whose face is creased with the road map of his life, was sitting on a small stool next to a fence and his favorite horse, Arepa, named after his favorite food, was by his side. He was smoking a cigar, the soggy tip clenched between his teeth, and playing a small accordion, along with beer, a cultural gift from the Germans. Smoke was whirling around his head leaving me to wonder if that was the magic smoke known to his grandfather. Similar to the other campesinos, hanging from his belt was a machete sheathed in a leather tasseled scabbard. Since he traveled by horse, he required a shorter machete and his was made out of chrome, making it easier to sharpen.

As per the program, the ride through the valley was scheduled for four hours but we decreased it to three in deference to our nether parts still remembering our horseback ride from the day before. The stable boys brought out our horses. I asked for and received one not too wide. We were in the hands of professionals and like an airplane pilot, they walked around the horses, inspected all the parts and readjusted the stirrups to perfection. Pedro, wearing the traditional woven white hat with the black band, led the way and Johnny guarded the rear. Leaving Carlos Alberto in his car with another World Cup Soccer Game, our small procession set off down the main road, packed dirt sustained by a layer of gravel.

The estate, located to the east of the Western Cordillera, was acquired by the present owner”s grandfather in the early 1950″s. While Pedro”s grandfather was up in the hills conjuring up spirits, this grandfather was down in the valley buying up property at what today must seem like a ridiculously cheap price. A small portion of the land closest to the main highway has been sold off to developers who are creating a small community of upscale houses, the perfect country retreat complete with swimming pool and satellite dishes. The land is rich volcanic soil with acreage devoted to cultivating soy beans and corn, part of which goes to feed the extensive herd of cattle. Ostensibly, the present owner, a doctor, has an eye toward the future, testified by the grove of young teak trees and the newly cultivated vineyard. The rest of the property is rich grassland through which mountain streams meander. Since our recent intimate experience with Colombian grass lands, it was interesting to learn they import grass seeds from Australia and Kenya and these pasture lands had been sowed in seeds from the United States.

Due to the high altitude, the morning felt like late spring and the clear air encouraged the brilliant blue sky. We came to a stop on top of a knoll and the entire estate surrounded us farther than the eye could see. From the moment we arrived in Colombia, from the first look down as we were approaching the runway in Bogota, we had been spell bound by the beauty of the country. Since I began writing about this trip, I have hunted through the dictionary and crawled through a thesaurus searching for the various words to describe the color green, then the quality of green such as lush, luxuriant, verdant, abundant, etc. etc. As if that was not enough, I searched through the variety of geographical terms in order to describe the contours of the countryside, such as mountains, valleys, gorges, ravines, creases and crevices, etc. etc. Because I wanted the reader to see it with us, I resorted to a variety of verbs that described the motion of the green landscape as it rolled out, stretched up, covered over, again etc. etc. I wanted my writing to have a palpable quality; I wanted company as we were dying of the heat and the humidity and invigorated by the fresh springtime air. Guess what, I cannot do it anymore; I have run out of words. ALL THAT IS LEFT TO SAY: SITTING ON THE BACK OF OUR HORSES, WE WERE LOOKING AT A MAGNIFICENT VALLEY. I will leave it at that and go on to another topic, the kind of horses we were riding. Continue Reading >>