When traveling in Egypt, one of the best ways to get away from the hordes of tourists is to book a desert safari. Having reached Bawati, the largest village and administrative center in the Bahariya Oasis, our program consisted of one night in the White Desert and then one night in a hotel in Bawati, along with the promise we would not miss any local attractions. The Lonely Planet warns the tourist to be prepared for the fierce competition among tour operators but the only attention we encountered was from the local tourist police.

After several cell phone calls, we were assured our desert guide and new driver, Mahmod, was on his way. Tired of waiting, Donald and I decided to explore. Stepping out of the van, we were surprised by the cool breeze coming off the desert. Even though it pelted us with a volley of loose sand, it softened the impact of the noonday sun. We walked along the main street , lined by small shops catering to local needs. These were built either from traditional sun dried mud bricks or white stone bricks, we would continue to see all over Egypt. We arrived in the town before the tourist boom and only a few shops had ventured into selling tourist type kitsch. Few in number but ready for business; not sure where we were from, they approached us changing languages as fast as they were lowering their prices. Once again, they were easily discouraged by a polite no thank you, not persistent as some Asian vendors who have physically attached themselves to us. A hut with two walls leaning at a precarious angle, defying the laws of gravity, plus a couple of tables and chairs created a coffee house and we smiled at the old men as we walked past who were content to play dominoes, talk to their friends, and smoke their shishas (bubble pipes.)

Finally Mahmod showed up, a young twenty something, walking with exuberant confidence and the restlessness of someone who wanted to get moving. Rejecting the galabiyyas, he was dressed in tight fitting jeans with a t-shirt, all of which showed off his muscular frame. He wore a checkered head scarf, reminiscent of Yasser Arafat, skillfully wound around his head with a small part that hung down his back. He was a perfect example of east meets west.

We transferred our bags into his white Toyota Land Cruiser/4WD where neatly piled on top was all the gear and provisions for our night in the desert. This vehicle belonged to the local travel company but someone with a flair for decorating had covered the dash board and front bucket seats in fake fur, resembling silver fox. I am sure our guide, Mohammad, the city boy was not looking forward to sitting on a pile of fur as the day was warming up fast. To delight the back seat passengers, two white satin pillows in the shape of hearts had been attached to the head rest and two pink angels trimmed in fur held a sign expressing their love for us.

Yet to be nicknamed ” Mahmod, mad man of the desert”, Mohammad explained he was a certified desert scout because he had passed a 1 1/2 month training program. But I was willing to bet it was his Bedouin heritage that made him a true son of the desert. He pulled up in front of a store. He did not speak English and through translation wanted to know if Donald wanted to buy a head scarf. Donald declined. He pulled up in front of another store and through translation asked if we wanted to buy beer. I wondered if they taught this in guide school. This was the first of his many surprises. Not only was beer available, it was ice cold, and cheap. At only $4.00 per can it proved to be the cheapest beer we would encounter. Not to waste a cold one and a practical way to rinse the sand out of our mouths, we popped the tops and settled back to see what would happen next.

Before we could leave town we had another encounter with the tourist police. Once again, we stopped at their checkpoint. With rifles and AK47’s slung over their shoulders, they approached, wrote down numbers on those tiny pieces of paper, mumbled Amerike, and let us pass. Mahmod inserted an Arabic music tape, this time Arabic rap. We were ready to go and with one hand directing the music and the other constantly adjusting his headgear, we headed out with the fake silver fox blowing in the wind.

Driving south on a properly paved road, we left the oasis and once again plunged into the desert. Here black stones, ranging from pebbles to boulders, vestigial evidence of ancient volcanoes, littered the sand, creating the Black Desert. Just as we were beginning to think we had once again reached the hoped for middle of nowhere, Mahmod pulled off the road and we were immediately confronted with a hilltop covered with tourists. This was the first time we had a tourist sighting since the rest stop earlier that morning. Not sure if this was the same group, we once again thought they were French. Who but a French woman would wear a scarf while climbing a hill? Declining the opportunity to summit, we walked around and after kicking over a few rocks and finding our sociable waves unanswered, we were soon back in the car heading down the road. A few minutes later, with only tire tracks as a signpost, he pulled off the road.

Our drive across the desert ended at a small oasis where water was coming out of the ground through a metal pipe. He parked in front of a Bedouin style hut, constructed from nothing more than six upright posts made from cut down date palms and bundles of dried date palm fronds artfully forming walls and a roof. This was a perfect example of how multipurpose the date palm can be. Mohammad told us it was time for lunch. Thinking we had finally achieved “nowhere”, Donald and I removed our shoes and entered the hut but to our surprise, seated on piles of woven carpets in front of low tables, was the group of tourist we had seen earlier. They were speaking French and had not become any friendlier.

A small hut, attached to the bigger hut, functioned as the cook house. Mahmod prepared our lunch and having declined the food at the road side truck stop and the Oasis comfort stop, Donald and I were seriously hungry. Sitting down at our low table, I noticed it was set with spoons. Now we would not have to eat with our hands. In countries where this is traditional, it is only proper to eat with your right hand, as your left is reserved for taking care of private business. As for me I am left handed and would not be allowed in the communal bowl. Our luncheon banquet slowly evolved as plate after plate of food was placed before us. I do not know how he heated the pita but there were baskets full of it to dip into the hummus and the babaghanoosh , both seasoned with the right amount of garlic and lemon juice so often missing in restaurants. There was a bowl of creamy lebnah augmented with sliced tomatoes and red peppers. He had prepared sour cream with sliced cucumbers and out of a package created a tuna salad worthy of the finest lunch counter. I was most excited by the plate of fuul and finally I was able to enjoy it cooked in the traditional manner. Minted, sugary tea, served in juice glasses completed our meal. 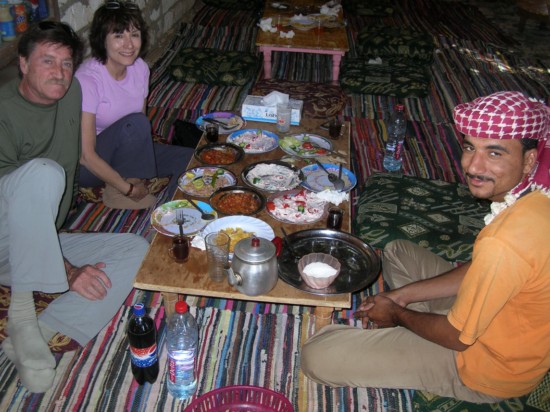 We climbed back into the 4WD feeling good. A great lunch and the dazzling blue sky with just a hint of cooling desert breeze contributed to our soaring spirits. Back up on the two lane, looking out at the landscape flying by, we felt embedded in the forbidding desert landscape spreading out all around us, empty except for the occasional cell phone tower, the usually empty sentry box, and the bus full of French tourists. We were traveling in the Egyptian part of the Sahara Desert, through a land mass that had no edges, looking out at sand that knows no boundaries and has no memory, covering over all that is left behind.

The next stop on the afternoon’s touring program was Crystal Mountain, which was not a mountain but a large quartz rock adjacent to the highway. We walked around it, noticed the hole in the center, and commented on the ground littered with shards of quartz crystals gleaming in the sunlight. As we were driving away, the French tour pulled in. I guess we were all on the same tourist trail.

WHERE IS THE WHITE DESERT?

All of a sudden, with no signpost obvious to us, Mahmod pulls off the road and we find ourselves heading into the desert. We bounced along over rugged terrain until he hit a patch of loose sand. Jumping out, he manually engaged the front axle and our vehicle morphed into a 4WD. Back in the car, as a camel driver urging on his stead, he stepped on the gas and soon we were flying across the open desert, carving fresh tracks in the wind rippled sand, all the while jerking the steering wheel left then right as if to maintain traction. As if trying to catch the wind, we submitted small sand dunes, crashing down on the other side. I had done this before several years ago on an ATV in Namibia but it is definitely scarier in the back seat of a Land Cruiser being driven by a mad Bedouin, one hand on the wheel and the other adjusting his Arabic headscarf while looking for the other end of your seat belt.

A large sand dune loomed in front and before I could say “he would not dare” we found ourselves positioned on top. We were afforded a 360-degree panoramic view. Down below it was as if you could see Monument Valley and the Painted Desert at one time. On the desert floor, ridges of golden sand striated with bright mineral colors mingled with brown sand. Blackened conical hills, like small volcanoes, populated the distance and we could just make out the silhouette of a camel caravan slowly moving across the skyline, Bedouins seeking the next oasis.

Before we could abandon the car and “ski” down the other side in our shoes, he had the motor revved up and we went flying down the dune, a neck jerking, bone crushing ride complete with a final bump when we hit the desert floor. Excitement was ricocheting between but when the roller coaster ride was followed by a sharp left turn we were treated to an astounding site, a sea of white sand spread out in front of us for as far as we could see. It was late afternoon and we had finally arrived at the White Desert. Mahmod picked out a campsite and began to unload the supplies. Donald and I went for a walk and since it was time for manual word, Mohammed disappeared.

1 thought on “Travels in Egypt: A trip to the White Desert – Part 2”