Travels in Egypt: A trip to the White Desert – Part 3 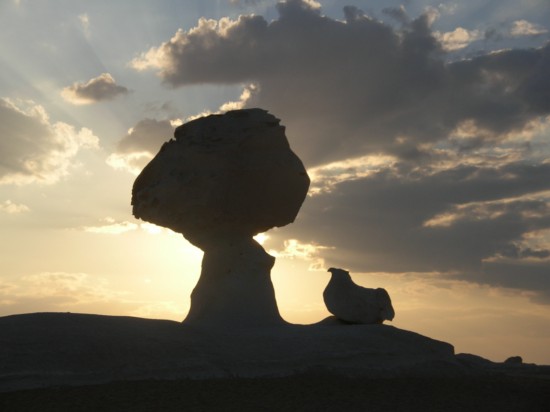 The White Desert, called Sahara al-Beida in Arabic, is a plain of large calcite deposits covered in white sand. With the development of desert safaris, it has become a popular destination and even though it has been turned into a 300 sq. km Protectorate, many fear this is not enough to preserve its pristine condition. A breath taking fantasy of total whiteness made more amazing by the presence of white chalk monolithic boulders, pinnacles carved into interesting formations by eons by wind and sand storms.

It was late afternoon when we arrived and while Mahmod was setting up our camp site, Donald and I decided to explore. As we walked across the desert floor, we realized that for the first time in seven days we were surrounded by total silence, Cairo’s dissonant notes a dimming memory. Even the ubiquitous flies, compliment of Old Testament plagues, were missing. Here we experienced a seamless connection between the soft whiteness of the desert landscape and the electric blue sky, where a sunset was being prepared. From peaceful solitude flowed a reflective moment and the white stone monuments seemed to gather around us. Yes, they looked like the dog, chicken, camel, rabbit, and mushroom suggested by the tour guide. But they also reminded me of sculptures in an outdoor modern art museum, returning our gaze, compelling us to puzzle out what nature, with its artistic power, had originally intended.

The desert, previously so hostile and impersonal, had now become a surreal landscape. Were these calcite formations props in a dream, clouds in heaven, icebergs in the Arctic? We walked on, following no paths, just wandering through the lilac afterglow of the gathering dusk. As the shadows lengthened, the feeling of impending night suggested a return to camp. Patches of light, refusing to be extinguished, backlit the pinnacles, creating bluish bas reliefs against the pastel hues of the soon to be extinguished sunset. The world was on the edge of disappearance when we returned to camp now lit up by a bright fire.

BACK AT THE CAMP SITE

When setting up a campsite, any denizen of the desert knows it is important to create a windscreen. Mahmod did this very cleverly by hanging lengths of traditionally dyed material at a ninety-degree angle, supported by the car. The placement of a large hand woven rug made it a cozy corner and the addition of his propane cooker and supplies made it into a kitchen. He created a space for us by laying down more carpets and placing two long foam covered mats on either side of a low table. Waiting for the fire wood to turn into charcoal, Mahmod busied himself with boiling water for tea and peeling potatoes and chopping onions.

Preempting teatime with the cocktail hour, Donald and I opened two beers. We offered one to Mohammad who declined explaining the Prophet prohibited drinking because men who got drunk were not able to pray. When I asked him why he could not just drink in moderation, he told me the laws of the Koran are to be obeyed not discussed. He never questioned the words of the Prophet and just obeyed what he said. But sensing an opening, he told us that Mohammad was the last Prophet to receive the word of God therefore, he received the fullest information and for that reason all non-believers had to convert to Islam, which of course, included Donald and me.

In coming to Egypt we had hoped to achieve a respite from political and economic issues and to get so far removed that time was no longer in its proper place. Accept for the local English language paper we had been without access to international news. Mohammad, apparently not wanting ignorance to insulate us from reality, felt encumbered to present his political views. Simply stated, he hated George Bush and knew that Obama would be different. Like several other guides after him, he did not believe his government always told the truth and was only willing to believe that which he could see for himself. The Middle East constituted the finite boundaries of his world and he had no interest in reading Western newspapers for other points of view. He was a college graduate, an Egyptologist, and had spent five years working in the UK. Apparently these experiences had not modified his religious or political views. He thought in terms of absolutes, rejected compromise, and did not understand ambiguity. He wore the stain on his forehead, not yet turned into a scab and later we would find out how extreme he really was. But at this moment we had other concerns. There were magnificent aromas coming from the cook fire and while listening to Mohammad, we failed to notice that dusk had morphed into night and a bright and shiny large, luminous, completely developed full moon was hanging low in the eastern sky, polishing everything it touched. 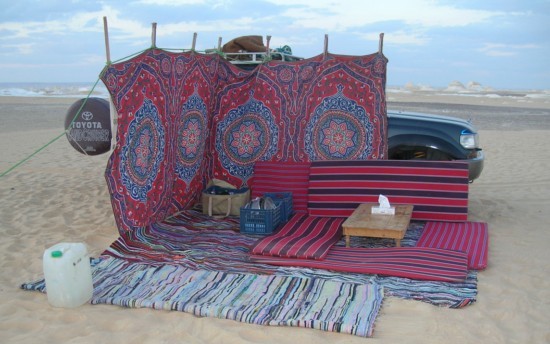 UNDER THE FULL MOON LET THE EVENING BEGIN

As we gathered around the table, spokes of light from candles placed in plastic water bottles, which Mahmod had cut in half and weighed down with sand, sent the night into retreat. Without knives and forks, we ate Bedouin style, scooping up the food with pieces of pita. Each dish, an explosion of flavors, made this one of the best meals we had in Egypt. Mahmod had seasoned pieces of chicken with Middle Eastern sptraices and grilled it over the coals; he had stir fried rice and stewed tomatoes with potatoes. He set out an assortment of salads accented with the mint he had earlier picked from the police station and made special by his home made lebnah. For dessert he placed a bowl of dates on the table and filled small glasses with sugary mint tea.

The surprise of this fantastic dinner was only the beginning. After he finished his kitchen chores, he placed another log on the fire, and sitting down in front of an orange blaze, put his headscarf back on which he had discarded while cooking, grabbed his finger drum, and as a serene smile spread across his face, he began softly to beat the drum. As the dramatic rising full moon cocooned us in a mantle of white, he began to sing songs from his Bedouin heritage, at first soulful, laments about lost love. As if in harmony with the sparks from the raging fire, his voice became more powerful and the rhythm he pounded out became more intense. As shadowy figures around a camp fire, clapping to the beat, we allowed ourselves to be swept along by the compelling music and his powerful voice, calling out through the night as to awaken his revered ancestors. Mad Mahmod, king of the desert, needed to sing, needed to fill the night air with his lamentations and then his joyful sounds. He was connecting with his heritage and we were happy to listen. Swept up in the moment, Donald took the drum and rhythm poured from his hands as from an unknown source. With the help of our Bedouin guide, we were silent witnesses to the magic of the desert. After a few more songs, Donald and I made our way to our tent, our path illuminated by moonlight.

Our tent, not as wide as a double bed, held two sleeping bags. I crawled in first and while Donald waited, he saw lurking a short distance behind our tent pairs of sparkling eyes. We had been told about these small desert foxes called Fennec. Sleeping during the day to avoid the heat, they only come out of their burrows at night. Their large ears attribute to their exceptional hearing and while they enjoy insects and small mammals they were checking our campsite for food. We heard them yapping to themselves and two sleeping pills later found us laying shoulder to shoulder, our incredible night already becoming a dream.

Around 2:30 in the night, we were awakened by the sound of Mahmod’s cell phone. In the morning we were told that the guide leading the French tour, which we had encountered several times that day, wanted him to come over and sing for them.

In looking back, what we are left with now is memories, a head full of brilliant moments to which I have applied a string of words, maybe some too many, depending on who you ask. But I know we arrived at a new place, experienced a new culture and not knowing what to expect, we were open to encounters without preconditions. We were Rousseau’s tabula rosa, a fresh slate on to which to imprint new experiences. Those who know me have often heard me say, “Put me in a tent or put me in the Ritz, just do not put me in the middle”. This time the tenting experience was extraordinary. Funny, had the French been friendlier or called sooner, they could have come over. But then again we did not need them kumbayaing around our campfire. 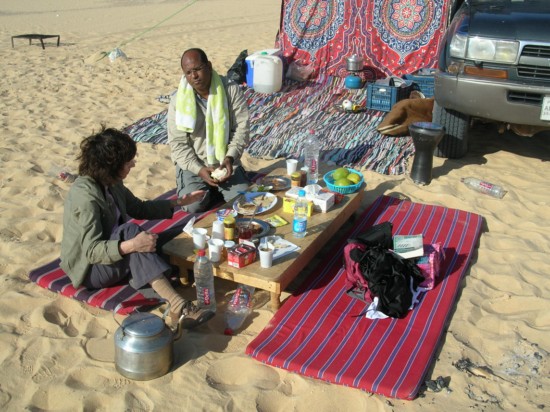 Travels in Egypt: A trip to the White Desert – Part 2

The Atacama Desert – Things You should know about The…