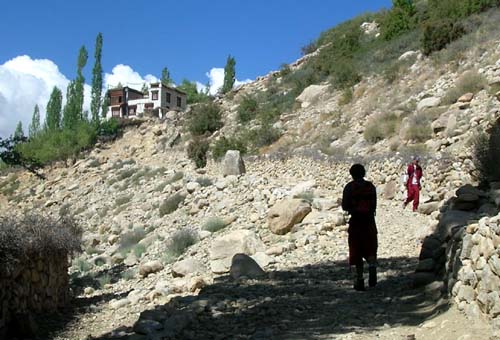 AT THE CAMP SITE

At 4:30 I walked over to the house, actually a two story concrete box. An opening had been left for a window, but the glass had not yet shown up and the floor was hard packed dirt. Numgal was sitting on a jute sack surrounded by his kitchen and Dorje was checking on his donkeys. All of us would work on dinner and when Dorje returned from his donkeys, he gave me an odd look when I suggested he wash his hands before helping. Dorje cut the lamb into cubes, which I liberally sprinkled with Numgal’s panoply of spices. He had found a bent piece of wire and after hammering it relatively straight, had cut it into skewers. A small fire was burning in the attempt to turn willow branches into charcoal. All was going well and we agreed dinner would be at 6:30. While the meat was marinating, I returned to my tent to check up on Andrew Harvey’s spiritual progress, as compared to mine.

Tonight’s dinner had all the makings of a feast. Because we had so much meat left over and all of it had to be eaten that night, we invited the owner of the camp site, who brought along a friend. That afternoon two goat herders, along with their goats, had shown up, and they were invited. When I returned, Dorje had already made his chapattis and had the skewers roasting over the coals. Numgal had cranked up his pressure cooker and the dal and rice had already been prepared, along with a saute of our various vegetables. We had more lamb than skewers and Numgal had fired up the remaining meat in onions and garlic. The menu now included lamb two ways.

When I arrived at 6:30, a fire had been lit and all the men were sitting around waiting for dinner. They had prepared a special place for me and I sat on a camp stool with the vegetable crate as my table. Once again, everything Numgal prepared was delicious. Each person ate in his own way, ranging from knife and fork, to spoon, to just fingers. I do not think willow wood will replace hickory or mesquite because it left a rather unpleasant taste on the meat. But no one seemed to mind and they ate until the lamb was finished. If an anthropologist had been there, she would have been very pleased to hear the old goat herders singing around the camp fire, with the younger men chiming in. This was the night of the full moon, the Buddhist symbol for enlightened consciousness. (Buddha was born and entered Nirvana during a full moon). We never saw the moon that night because it remained completely hidden behind clouds, not a good sign.

Leaving the men around the camp fire, I returned to my tent. I had no trouble falling asleep with the sound of the rushing stream in one ear and the sounds of donkeys braying in the other. Morning came too soon. Dorje showed up with the promised bowl of hot water and the pot of tea. It is surprising how clean one can get with just a small amount of water. Later he returned with a breakfast tray loaded down with fried eggs, toast, cereal, and puris. Numgal and I left the campsite around 9:00, heading for a monastery 2 ½ hours away and on the way back we would walk through the nearby village. Not veering too far away from the stream, the path wrapped around the contours of the mountains. Once again the walking was easy until we encountered rock slides. We passed traditionally constructed houses with their ancient apricot orchards and the familiar chortens and mani walls. We lunched and rested in a willow grove. The walk up from the river bottom to the village was as demanding as the one I experienced the day before, expect this time the sun was hidden by dark grey clouds. When we returned to the camp, we had been walking 5 ½ hours.

I was doing fine and quite capable of going forward after a little rest but the main concern was the cloudy sky. June was supposed to be the dry season but by late in the afternoon it began to rain. That night we ate inside the building. The meat was finished and we enjoyed a vegetarian meal, along with a soup he reconstructed out of a soup mix. I sat on the camp stool behind the vegetable crate table and Numgal and Dorje sat on jute sacks. This time I brought the damask placemat I had “borrowed” from Jet Airways. Candles were lit and it was quite cozy.

The sound of the rain beating on the tent lulled me to sleep but the night was not for sound sleeping. I woke up at 4:00AM, either because I was burning up in my sleeping bag as its tight contours would not allow me to turn over or because it was necessary to stop the absurd dream playing on my mental DVD player. I had been dreaming that the rain had caused a flash flood and I was locked inside my tent, hurdling down the turbulent waters. I woke up just before I was deposited into the Indus River. Had I known at the time this tent had holes, I would have saved myself all this trauma. At 5:00 AM I awoke to the call of two magpies discussing a few things in the willow trees close to my tent. I had seen them often and they are the size of pigeons with a white chest and white tipped blue black wings. By 7:30 when Dorje appeared with the hot water and the pot of tea, the rain was reduced to a drizzle. They packed up the camp site and dressed in rain gear, we set off. We had one more pass to cross and this one measured in at 11,500 feet.

WALKING IN THE RAIN

The incline toward the pass was gentle and soon the rocky path turned into soft grass, enjoyed by everyone, including the donkeys. Mountain roses lined a dry river bed and even in the misty morning their deep pink color was impressive. But like most things beautiful, there was danger as their blossoms were protected by giant thorns. We reached the summit in forty minutes and once again I placed a stone on the mani wall. The weather was not progressing well. The higher we climbed, the heavier the rain and the stronger the wind. I was wearing a rain jacket and rain pants and protected from the rain outside. But inside I had made the mistake of layering my clothes over my thermal underwear. The further I walked, the hotter I became and soon there was a raging sauna inside my rain outfit. It was raining too hard to take off any clothing. Below us stretched another oasis, its organic form expanding out to the base of the surrounding mountains. The descent was easy and in an hour we had arrived at our next camp site. At this lower level, the rain had turned into drizzle and the mist had closed in on the valley, reducing our view almost to the hand in front of our faces. The camp site was already filled with tents. There was a main house and a guest house, similar to the one I had slept in several nights before. Numgal commandeered a block house and set up his kitchen and cooked up lunch while Dorje set up my tent as far away from the other tents as we could get. The rain returned, the temperature dropped, and retreating to my tent after lunch, I found I had taken on water. Nothing was damaged because, thanks to my friend’s advice, everything I had was in zip lock bags. Numgal came with a bowl and spoon and collected as much water as possible. I spent the remainder of the afternoon in a very damp tent, wondering if I was still having fun.

It is time to shorten up the story. Late that afternoon, I abandoned the tent, collected my belongings and checked into the guest house. It was not much but at least there was a dry roof over my head. Numgal and I agreed that if the rain did not stop we would make other arrangements. The following morning it was still raining. Time to make the phone call. Numgal was able to call from the large house. He contacted the tour company and an hour later we were driving down the road, heading to a new destination. I was actually sorry to leave Dorje behind as he had become such an important part of my experience. I tipped him most generously and he collected his donkeys and began his own trek home. He would be there in four days.

The driver who picked us up remained with us for the duration of my stay in Ladakh. He was an old man, set in his ways, and not always receptive to my constant requests to slow down. Numgal and I continued to tour the country. We visited more monasteries, attended religious ceremonies, and crossed the 19,000 foot pass into the Nubra Valley, which may be listed as one of the places at the end of the earth, even after I had arrived. Back to Leh, I spent one more night at the Deskit Guest House before returning to Delhi, where I would spend a few more days before going home. At the Delhi Airport I found Suzy, Doris, and Doris. In our own way, all of us enjoyed our experiences in Ladakh. Like you always do, we promised to keep in touch.

Even though it may seem dated, people are still coming to Buddhist countries to “find themselves” and like the author I was reading during my stay in Ladakh, they come hoping to peel away enough of the accretions of Western life to allow their inner selves to spring free. Hoping to comprehend the oneness of the world, they willingly trade in Western material values for Buddhism’s spirituality and emphasis on wisdom and compassion. The process implies an uncovering of what you really are. I did not go there to find myself, and even though I enjoyed visiting the monasteries, I was not seeking spirituality. I did not intend to strip down, but to “suit up.” I arrived eager to collect experiences which would enrich my concept of myself. I also went to Ladakh to test myself and each mountain I climbed was my own personal Everest. I enjoyed the sense of achievement and I had fun. When the rain came, the fun went out; there was really no reason to continue. The tour company organized another program and Numgal and I continued touring. We kept all of our supplies and each night in the guest house, Numgal set up his kitchen and even though the accommodations were rough, I continued to eat fantastic Indian food.

I was very fortunate to have Numgal for my guide. He was a fantastic twenty something and as a practicing Buddhist, a true example of wisdom and compassion. I left satisfied and I am sure Numgal was very pleased with me. The experience was so rewarding that I have contacted Tomas at Footloose Travel Guides to set up another trek. This June (2008) I hope to be e-mailing from the path to Mustang. Look up Nepal on a map, locate the Kaligandaki River that runs through the middle of the country and up in the northern part of the country you should find Mustang.