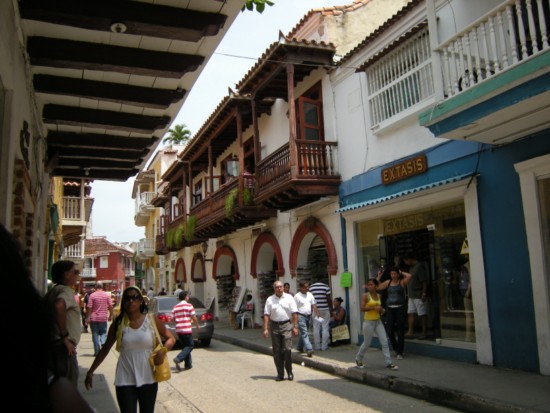 Over the years, we have come to realize, depending on the nature of a city, some places are better enjoyed without the structure of an itinerary. Cartagena, behind the walls, is just that kind of place, a walking city beckoning you to wander its narrow cobblestone streets and allowing serendipity, and not a tour book, to be your guide. Historic Cartagena is a visual treat, a place where color takes advantage of every available surface, the character of the paint expressing the style of the owner or the passage of time. The grand buildings, expressing colonial and republican charm, are painted in soft shades of pink, peach, white and ochre and the smaller ones, usually one story, formerly occupied by workers and tradesman, are painted in a varied palette of bold colors.

Cartagena is a mélange of many cultural influences, a mix of people, Caribe Indians, Black Africans, Arabic, Spanish and other Europeans, who have been blending in an ethnic stew for over 500 years. Life here is lived out on the streets in a perpetual carnival pulsating with a vibrant Caribbean atmosphere. This city, with its seductive charm, is waiting for you to soak it up and to seep gently down into it. It is an emotional place that should be engaged, not so much studied; a place to be felt more than read about.

Historic Cartagena is divided into four sectors. Our hotel, located on Calle Santo Domingo, was in the Center or Calamari district and on our second morning in Cartagena, we set out on foot to explore this area first.

ON FOOT IN CARTAGENA
It was still early but the humidity here works 24/7and even before we could step into the street, it had us cloaked in a soggy wet blanket. Our immediate concern was to find a banco, a place to change money. We turned right out of the hotel and then took the first left, arriving at the Plaza Bolivar, a popular gathering spot with a storied history. The moneychanger was located on the west side of the plaza and we found him in a small office behind a thick wall of glass. Donald presented him two crisp one hundred dollar bills and in turn received several sheets of bureaucratic paper work to fill out. The man, without reason to hurry, slowly examined the money, held it up to the light, marked it with a pen and finally decided it was good enough to exchange for Colombian pesos. Apparently not trusting his calculator or his computer and relaying on nothing more than an invoice book and a sheet of carbon paper, he began to do the math by hand. Losing patience, I stepped outside and found myself standing in the former Arcade of the Scribes. In the past, illiterate people came here and paid a “scribe” a few pesos to write a letter or fill out a form. Gabriel Garcia Marquez, Colombia”s most famous author, worked in Cartagena when he was a young journalist and used the city as the background for several of his books. Those who have read Love in the Time of Cholera will recognize this to be the place where Florentino Ariza, one of the main characters in the book, worked as a scribe.

With our dollars changed into pesos, Donald and I walked across the street and entered the Plaza Bolivar, already filled up with morning visitors. During colonial times, this was the center of political and religious life. The Cathedral, home to the archbishop, is located on the eastern side of the plaza and rebuilt after Sir Francis Drake”s attack in 1586. The headquarters of the Inquisition is located on the north west corner and during colonial times, this square was called Plaza Inquisition. Established by the Dominicans to guard the purity of the Catholic Church against heresy and witchcraft, the Inquisition was exported to Cartagena in 1610. However, it was not carried out in the Spanish colonies with the enthusiasm experienced in Europe. Today, their early 17th Baroque building has been restored to its former glory and turned into a museum explaining the Inquisition with exhibitions of the torture instruments used to gain confessions. The Gold Museum and the Central Bank are both housed in renovated colonial buildings, adding additional grandeur to the park area.

With the advent of independence from Spain, the hated Inquisition was closed down and the plaza was turned into a bull fighting ring. Then in 1896, it was renamed, this time to honor Simon Bolivar. In 1810, Cartagena tried to liberate itself and became one of the first towns to declare independence from Spain. However, by 1815 this attempt had failed and even though they were defeated by the Spanish army, Bolivar called Cartagena “la heroic”, the heroic city. Cartagena would eventually gain independence in 1821 following Bolivar”s defeat of the Spanish at the Battle of Boyacá near Bogota in 1819.