Travels with Alexandra and Donald 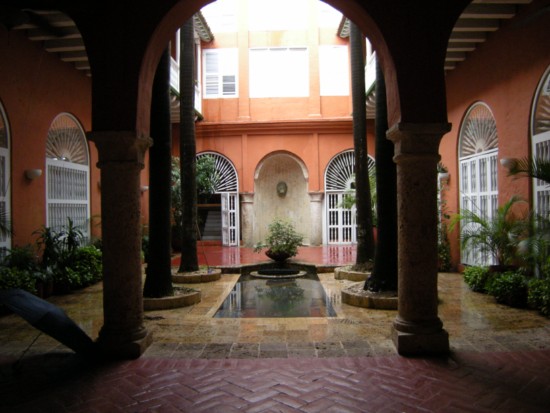 After crossing the mountains, high valleys and the broad plateaus of the interior, Donald and I headed for the Caribbean coast, the ground level for a country that seemed to tower above the sea. Our trip would continue with a total of seven nights in Cartagena, four nights in the Tayrona National Park and one night on Rosario Island.

CARTAGENA: BACKGROUND
After defeating the Calamari, a tribe of indigenous Caribe Indians, Pedro de Heredia with his 150 men officially established Cartagena in 1533. Beginning with ten huts and a small church, it is one of the oldest Spanish colonial towns. Because the shape of the bay reminded him of his homeport in Spain, Cartagena, Pedro de Heredia called the new city Cartagena de Indias. In 1552, after a fire spread through the settlement destroying the wooden buildings, the city was rebuilt out of stone, brick, coral and baked tiles. Located on the Spanish Main, Cartagena became Spain”s most important port, the transshipment point for all the treasures dug out of the soil and plundered from the Indian tribes. Before being loaded onto Spanish galleons, its warehouses bulged with gold, silver, emeralds, pearls, sugar, tobacco and spices from the Far East that had been transshipped from the west coast of Mexico. However, this accumulation of fabulous wealth did not go unnoticed and for the next 200 years, Cartagena continually had to defend itself from attacks by Dutch, French and British privateers, operating under instructions from their government and from pirates, free lancers plundering for their own account.

After an attack by the French just thirty years after the establishment of the city, it became obvious the city needed to be fortified but work did not begin in earnest until after Sir Francis Drake”s attack in 1586. Operating under the blessings of Queen Elizabeth, Drake destroyed 25 % of the city including the recently completed cathedral. After a promised payment equivalent today to two hundred million dollars, he allowed the remainder of the city to go unharmed. Cartagena was vulnerable to attack from both land and sea and construction of fortifications would continue until completed in 1756. By that time, Cartagena was surrounded by seven miles of thick highly defended walls and considered the strongest fortified city in Spanish colonial America. Even the churches were built like fortifications.

Cartagena and Veracruz, Mexico, were the only two colonial cities allowed to engage in Spain”s lucrative slave trade and slaves, brought from Africa, built the fortifications, cleared the land and did the farming. The slave trade and its prosperous port made Cartagena one of the wealthiest towns in Spanish America and also one of the most beautiful. In 1984, UNESCO declared it a World Heritage Site. Facing the Caribbean Sea, with its vibrant mix of ethnically diverse people, today totaling over one million, Cartagena has long been a cruise boat destination and a tourist mecca, receiving the country”s largest number of tourists.

WE ARRIVE
The conquistadors arrived on horseback, those fantastical monsters that scared the local population, and Donald and I arrived Continue Reading >>

Update on Recent Incidents in Guatemala – Department of Peten

Travels with Alexandra and Donald