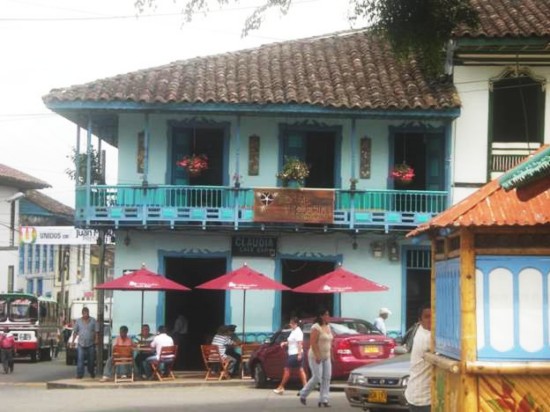 On our second day in the Zona Cafetera, the morning began with a sky struggling to remain blue while rain threatened from the distance. According to our program, Johnny was taking us to Filandia and Salento, both typical small towns in the area and to the Valle del Cocora where we would eat lunch and see the famous Colombian wax palms.

FIRST STOP FILANDIA
By 9:00, Donald and I were comfortably stuffed into the back seat of Carlos Alberto”s small KIA and with salsa music roaring out of his speakers, we drove through Pereira, this time traveling over the Cesar Gaviria Trujillo Viaduct, named for a hometown boy who served as President of Colombia from 1990-1994. Taking three years to build and costing fifty-eight million dollars, it traverses a wide river valley, cuts down on travel time and has become the proud symbol of Pereira.

With the city behind us, we were soon cruising through the lush countryside enjoying the emerald hills, valleys and hollows until we were stopped by a military checkpoint, all camouflage in color. We had been through these check points before but the soldiers always gave the thumbs up sign, meaning keep driving. Maybe at those times we had an older more respectable looking driver. This time we had Cheech and Chong sans the bong and funny cigarettes in the front seat and we found ourselves pulled over and surrounded by soldiers. They may have looked like children with pimply faces but they were heavily armed, clips in their rifles supported by a BAR set up alongside the road. At the time, it seemed amusing that the gun emplacement was located next to a rack of sausages drying in the sun. Apparently, this could have been a strategic move, not getting to far from their next meal. However, no time for laughing as the three guys were ordered out of the car, asked to produce their papers while being thoroughly frisked. As for me, they showed no interest, not even curious about my passport. After all, this is macho country; women are not seen as independent entities only as traditional appendages, girl friends, wives, mothers, and grandmothers. Certainly not the time to be a cultural warrior, after all we were only passing through and best of all, I did not have to get out of the car. The guys passed inspection and with two adios and one see you later, we were on our way. Up on the two lane, it was only a short drive to Filandia.

SECURITY ISSUES
Safety is an ongoing concern in Columbia and as tourists, we welcomed the presence of the military and the police as they were there as a deterrent to the bad guides and a reassurance to the people. Since the election of President Uribe in 2002, law and order has been reestablished and the level of violence has decreased to where it is now possible for people to feel safe enough to leave their homes and to travel in their own country. They handed out leaflets stating the equivalent of “if you see it, report it.”

FILANDIA
Filandia, translated by the Spanish into “the Andes Daughter”, was officially established in 1878. Today, it has a population not much exceeding 7,000. It derives its main income from growing coffee, a nascent tourist business and money repatriated from people who have emigrated to Madison, New Jersey. I do not know why they went there but the first ones must have been successful and the rest followed. Similar to most of these towns, it started out as a dusty pueblo with one main street lined with essential shops, such as a general store, a barbershop and a bar. The general store would have been well stocked with aguardiente and the ubiquitous machete which no self respecting campesino would be without. Bets are there would have been a brothel at the edge of town that probably had the only concrete floor while all the rest made do with pressed dirt. The first three shops remain but I am not sure about the latter. Yet, in some cases, no one minded having a prostitute in the family if she was earning money, otherwise, all young girls were expected to remain virgins or bullets would fly.

AT THE OUTSKIRTS OF TOWN
Before we hit the main plaza, Johnny brought us to an observation tower and the three of us walked up the five story circular ramp where we enjoyed a panoramic view of the surrounding countryside, including the cordillera”s foothills in the far distance. However, at the top level, form interfered with function as someone”s idea of a decorative jagged roofline impeded our view. The tower is the mayor”s pet project, an anticipated moneymaking tourist attraction. Workers were completing the grand entryway and building spaces designated for gift shops. They were making concrete in a small mixer whereas in the past they would have just ridden their horses back and forth over the mixture. We were the only customers and at fifty cents a person, it may take a while just to break even.

From the observation tower we walked into town. We left Carlos Alberto in his car watching the World Cup Soccer match between Nigeria and Argentina on his computer plugged into his cigarette lighter. He had joined the 21th century but as we walked along the country road, its uneven edges deteriorating, returning to the original gravel and sand, I felt as if we were stepping back in time. We walked up wooden porches and stepped into small wooden houses to visit with local artisans engaged in their traditional crafts. Men were weaving various kinds of traditional containers and baskets out of natural material they had found in the surrounding rain forests and processed themselves. They stopped their work when we entered their workshops and smiled a welcome. Dignified old men whose lined faces told silent stories of their long past were applying their traditional designs without concern for the tastes of the tourists who were just starting to visit the town. They spoke to us in Spanish and we replied in English, neither one of us understanding the other, but each having to say what they felt.

OUR DESTINATION WAS THE PLAZA
Soon we were walking on a sidewalk past low slung one story buildings and the occasional two story structure with its requisite over hanging balcony. The stucco buildings were white washed, topped with red tile roofs with eaves over hanging the sidewalk to provide protection from the sun and rain. No piece of wood trim was left in its natural state. The dado, the lower part of the wall covered in wood paneling, and the wooden doors were all painted in a wide ranging palette of intense colors. Each building, each geometric shape a colorful treats for the eyes, affirming the individuality of its owner. The entire street had a festive air that was only a foretaste of the plaza, which we came upon with just a turn to the left.