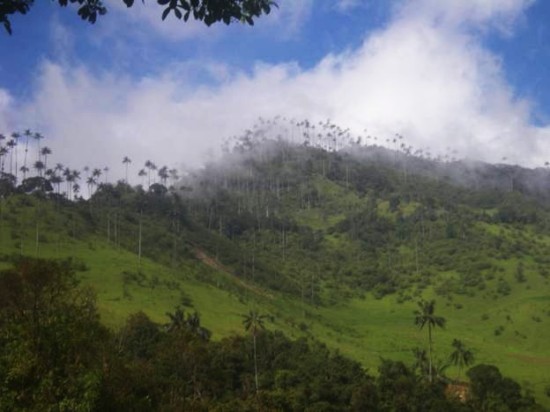 To reach our next destination, the Valle del Cocora, we headed back into the mountains. When the road was not following the contours of the mountains, it was going up, over and down, crossing from one valley to the next. Lush tropical vegetation grew in profusion, enveloping us in a symphony of green. Lacy tree ferns lined the road while poinsettias and what we consider houseplants were growing tall out of deep ravines. Sparkling green moss covered every available surface while lichens were attached to unwitting trees. Johnny, our guide, pointed out the yarumo tree, growing on the side of the mountain, made distinctive by its broad silver leaves. We commented on the large groves of leafy bamboo telling him after all our years in Asia we had never seen bamboo grow so large. He explained this was the guarda, a type of bamboo indigenous to this area. Thriving on the climate in the zona cafeteria , it is able to grow up to eleven centimeters per day reaching maturity in six months. Called the “steel vegetable”, it is promoted as a renewable resource, strong enough to be used in construction and pliable for furniture manufacturing.

The Valle del Cocora, named by the indigenous Quimbayas, translates into “water star”, supposedly in honor of the daughter of an Indian chief who ruled five hundred years ago. Regardless, the name is appropriate considering the area”s high rainfall. The valley is part of the foothills of the Central Andean Range (Cordilleras) and located near the Parque Nacional Los Nevados ( National Park of Snow Mountain) with its snow capped peaks reaching fifteen thousand feet.

We came to this valley to see the wax palm trees, the palma de cera, named by Alexander Von Humboldt, the German naturalist/explorer otherwise known for the current that bears his name. In 1801, he chose this name based upon the thin layer of protecting wax that covers its gray black trunk. Even though there are over three thousand species of palm trees, this one is special. It is indigenous to this valley, referred to as the “cradle of the wax palm” and thrives in high altitudes exceeding 4,500 feet above sea level. It grows to 180 to 200 feet tall making it the tallest palm tree in the world growing at the highest altitudes. It will grow under 4,500 feet but not as tall. On Palm Sunday, the faithful parade with palm leaves in order to celebrate Jesus”s entry into Jerusalem. In Colombia, the fronds of the wax palm were so popular that the tree was almost loved into extinction. In 1985, the government declared the wax palm the national tree and protected it by law. Today, the tree is treasured as a national symbol and the Valle del Cocora is a nature sanctuary and a park popular with Colombia tourists.

Entering the park, we were once again stopped by the military. In the past, FARC, the left wing guerrilla movement, had invaded the park and blew up a hotel in 2006. Right wing militias had also staked out a presence. Today, that is considered the past and once again, Colobians are coming here to enjoy the beauty of their own country. Carlos Alberto remained in the car finishing the soccer match and Johnny, Donald and I walked to the stable. We would ride horses through the valley, meet the travel agent to plant a palm tree, and then enjoy a special lunch of freshly caught brook trout, a specialty of the area.

THE VALLE DEL COCORA
The stable hands seemed to know Johnny and we were soon saddled up and heading out for the trail. Ahead, loomed a wooden bridge, one of those constructed from guarda trees, spanning a stream tumbling down from the nearby mountain. Without any input from us, the horses nixed the bridge, preferring to charge through the water, seeking out the sandy eddies, avoiding the stones. They soon found the path, and when they turned left, an astounding narrow valley spread out before us, a Colombian Shangri La. Plush grassland carpeted the valley walls, covering all the ravines and creases of the valley”s terrain with a brilliant green, stopping only when over taken by thick forested areas. These palms, nature”s skyscrapers, captivated our attention. They were scattered everywhere, securing the valley floor, locked into the sides of the hills, and projecting skyward from the tops of the ridge lines. Each one a graceful silhouette against a brilliant blue sky. Looking up at their soaring height, we marveled at their tapering elegance and felt diminished in their presence. Our horses moved slowly prolonging the moments, allowing us to observe the details and absorb the peace and tranquility, interrupted only by the sound track of water rushing through the nearby stream.

We followed the trail through the valley until it ended at the beginning of the park. Ahead lay a dense jungle marked with hiking trails. As we turned to go back, the weather deployed another agenda. The wind began to pick up and as if called to a meeting, dark clouds began to gather where the mountains reached their peaks and then taking available seats, settled down on the sides of the slopes. What began as a fine curtain of rain turned thick and we were soon pelted with heavy raindrops. Mist tumbled down from the heights, wrapping everything it touched in a gray shroud. However, the wax palms, oases of calm in the maelstrom, refused to be covered up and as the mist fell toward the ground, they projected through it like giant mysterious lollipops floating in the ether. As quickly as the rain began it stopped. A tear in the clouds revealed the blue sky and shafts of light poured through, highlighting the wax palms, now seen as beacons in the midst. Continue Reading >>

Why spend your holidays in Sardinia?