Canceled in 2008 because of protests and calls for Tibetan independence the previous year, the annual Lithang horse-racing festival may not happen once again this year if the situation in Tibet and much of the Tibetan-populated areas will turn for the worse in coming days. Tensions have been reported as high ahead of the 50th anniversary on March 10 of a failed uprising against Chinese rule in 1959 that led to the Dalai Lama fleeing into exile in India. As last year, once again this February and March the towns across the Tibetan plateau are being sealed off from visitors with armed . 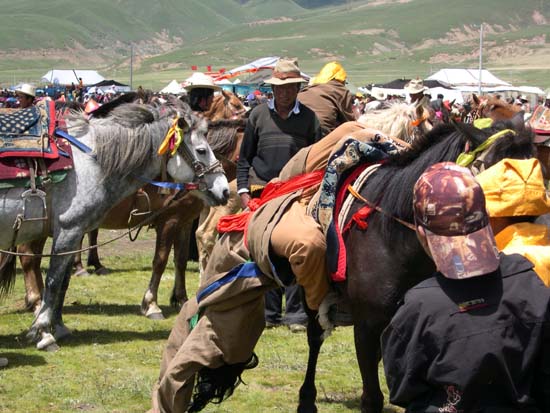 The annual Lithang festival, scheduled once again to be held in Mola Grassland in vicinity of Lithang from August 1 to August 8, a grand gathering of Tibetans to race, compete in acrobatic stunt riding and archery, is an experience to add to your list of places and events to must-see in your lifetime. To witness thousands of Kampa Tibetans gather decked in striking traditional garb and ornaments singing and dancing in an ambiance of nomadic atmosphere is one of those cultural celebrations that should not only be allowed to be staged every year but encouraged as well as protected as mankind”s cultural heritage. Unfortunately as individual tourists as well as tour operators have been banned from bringing their clients to Tibet, Westerns Sichuan and Gansu, and to make sure no uninvited visitor slips through troops block approach roads, more of the same hardline treatment dished out by the Bejing regime breeds more resentments worldwide, the crackdown induces a thouoght that , they themselves, one could only hope, should finally realize is indeed in need of an overhaul.