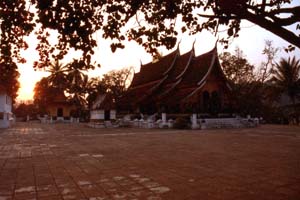 Following end of Vietnam – American war and its postwar alignment with North Vietnam’s communist system of government, Laos fell into obscurity. With the fall of Berlin Wall and dismantling of Soviet Union, Laos as Vietnam slowly opened its borders to international tourism. Vientiane, the capital, became the first target as a result of easy access from well-developed Thailand to the south. But it was not long before tourists started to venture up to north central Laos to visit Luang Prabang, the former capital of Lane Xang, the first independent Lao kingdom founded in the 14th century, a role it shared for centuries with Vientiane right up to the communist takeover of the country in 1975. Surrounded by mountains, a stunning potion on the banks of the Mekong River, some three dozen Buddhist temples, sizeable monk community, touch of former French colonial architectural influence and lively hill tribe market it was not long that Luang Prabang’s inherent charm and significant monuments were noticed by the United Nations Educational, Scientific and Cultural Organization and in 1995 added to its World Heritage list.

Due to its remote location overland access to Luang Prabang from Vientiane is even today no easier then fifteen years ago. Although paved but narrow and winding, at times in the past its traffic caught in crossfire between the government troops and the Hmong insurgents, taking some 10 to 12 hours of stressful driving to reach from Vientiane, road access to Luang Prabang was always dismissed as viable alternative to spur tourism. For the town to attract steady stream of tourists to provide for access by air was the best approach. Whereas in the first years of operation the airport was considered dangerous to land on, it has gone through improvements and as a result today Luang Prabang seees nearly million tourists per year, most from neighboring Thailand.

Needless to say increased tourism brings more income and more development although not all necessarily for the better. While the historical core of Luang Prabang must abide by strict guidelines set forth by UNESCO to retain its charm and preserve its cultural continuity, the development focuses on amenities and surroundings. Per recent news Korean investors are proposing a major 3000-hectare commercial development, christened Diamond City, in the total of some 2-billion dollars, a staggering amount for this outlying region of Asia. Said to include tourism, financial and recreational services, the project undoubtedly will alter the peaceful ambiance of the town and its surroundings forever.

Whereas even fifteen years ago when Luang Prabang first received its designation as UNESCO monument handful of local cargo barges sailed downstream Mekong all the way to Vientiane and no river craft plied the river specifically catering to tourists, other than handful of small boats run by local fishermen, the current river offerings include dinner cruises, scheduled river trips to traditional villages for dinner, music and dance cultural shows and elephant rides. While Luang Prabang has not yet progressed to becoming the travel supermarket town of Dali or Lijiang in Yunnan to the north, with China 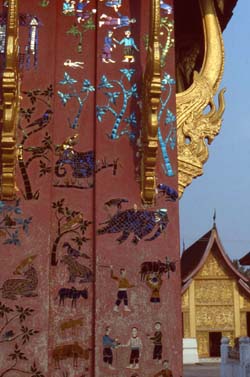 now allowing its citizens to travel ever more freely abroad including Laos, and with the bridge across the Mekong between Chiang Khong in northern Thailand and Houayxay in Laos, being the final link in a north-south road system through the Mekong region between Yunnan, Laos and Thailand, the main road completed in Fall of 2008 and the bridge scheduled to be completed by 2011, Luang Prabang will undoubtedly see more influx of overland visitors with hordes of Chinese package tour busses likely in the forefront.

While the Royal Palace in Luang Prabang, completed only in 1909 in Lao and French Beaux Arts style during the French colonial era for King Sisavang Vong and his family is one of the main Luang Prabang’s drawing cards, the impressive Wat Xieng Thong temple, located on the northern tip of the town’s peninsula at the confluence of the Nam Khan and Mekong Rivers, constitutes the highlight of the row of temples and monasteries that lead up to it. Although under the guidelines of UNESCO the historic core of Luang Pranga is assured to retain its temple ambiance, with more development in town’s surroundings and more tourists to come, time to see Luang Prabang is now before it will become another Venice or Prague.