The Great Himalayas of South Asia separates the Tibetan Plateau from Indo-Gangetic Plain. We know that it has the nine out of ten world’s highest peaks, including the top Mount Everest. The High Himalaya is also home to the the hundreds of lakes. Most lakes are at height of less than 16000 ft and very small, but it has some highest, largest and most beautiful lakes of the World. Here is the list of most notable lakes of Himalayas:

The Gurudongmar lake situated at an altitude of 17800 ft in north Sikkim state of India. It lies on the north side of Mount Kangchenjunga (third highest peak of the World) and just 5 kilometers from the India – Tibet Border. Gurudongmar lake is the second highest lake of India and one of the source of water of the Tista River. 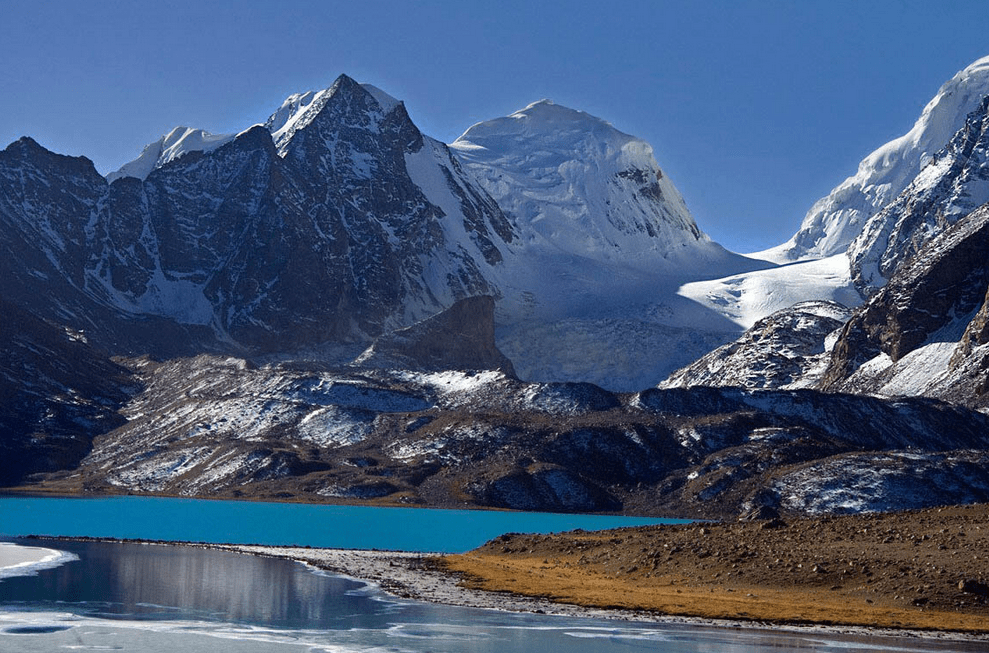 The panoramic view and scenic landscapes of the place is a sight to behold. Named after Guru Dongmar, the lake has a religious appeal.  The view of Mount Kangchenjunga is breathtaking from the lakeside. The milky color water of the lake is awesome and no doubt beyond the world. Surrounded by snow covered mountains and a view of a million lifetimes makes this place very special. 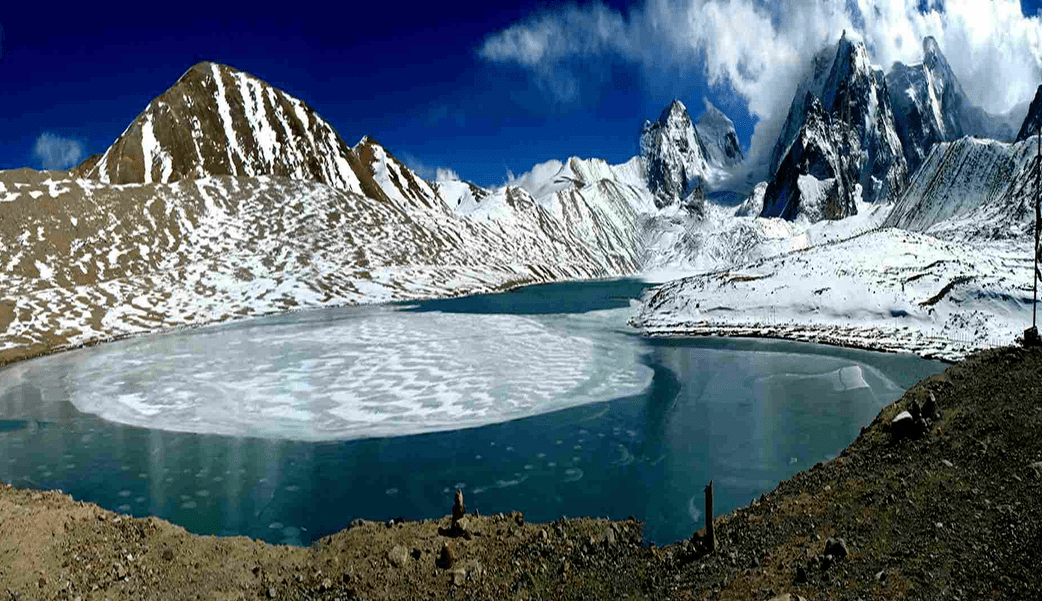 The lake can be reached by roads through Lachen village from Gangtok. It is 190 kms from Gangtok takes 8 to 9 hour drive to reach there, however it is recommended to take a night halt at Lachen village to get used to high altitude climate. Only Indian Nationals are allowed to visit the lake and foreign tourist can not go beyond the Chopta valley, few kilometers before the Lake.

Lake Tilicho located at a altitude of 4919 meters (above sea level) in Annapurna range of Himalayas in Nepal. The Lake is 4 km in length and 1.2 km in width and the highest depth point of 85 meters. The lake lies on the foothills of the 7100 meters Tilicho Peak. 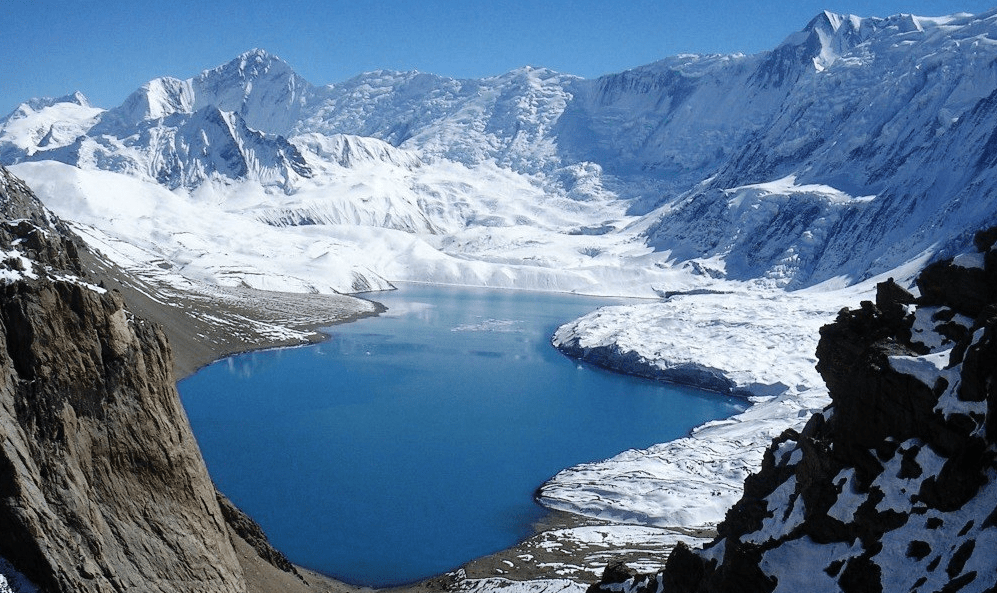 The lake is known for its scenic beauty and amazing view of Tilicho Peak. It is claimed to be highest lake in the world. Due to inhospitable conditions it was rarely visited by the trekkers, but it is now gaining popularity for its natural and wild beauty. snow leopards can be seen if you are lucky enough.

Tilicho lake is now popular among the trekkers in Nepal. It takes another 4 days of hiking from World famous Annapuran circuit trek. Trekkers must have good experience of trekking to visit the lake , as one have to cross the tough and challenging pass Thorung La. The trek gives you the chance to explore the unexplored natural, cultural and wild aspects of Region and The Lake.

Yamdrok lake is situated at the height of 14500 ft in Tibet Autonomous Region of China. It is one of the four holiest lakes in Tibet. It is Surrounded by numerous snow clad mountains and and snow melt water streams coming down into the lake are the main source. The Lake is over 72 kms long and 100 kms away from the capital city Lhasa. 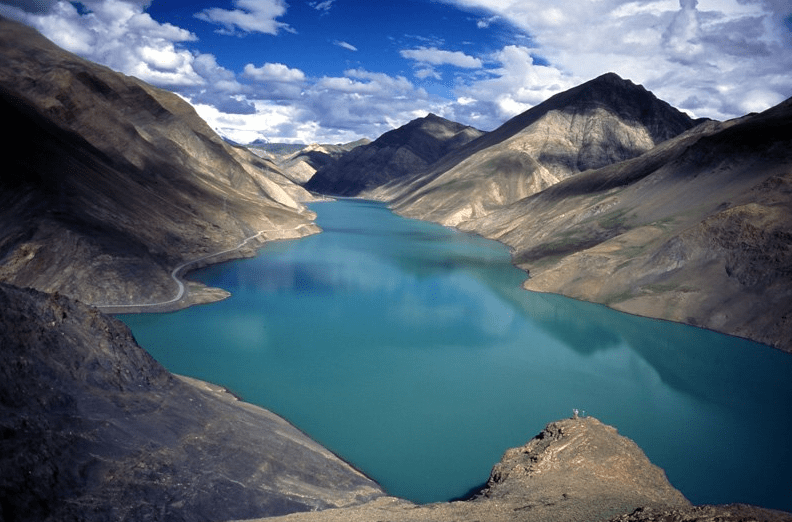 The stark contrast between the brown hills, the blue water lake and the spots of traditional Tibetan color all add to the exotic nature of a trip to Yamdrok Tso (tso means lake).The lake freezes as snow reside on mountains nearby in winter.

The lake is well connected to the capital city Lhasa of Tibet which is 90 kms from the lake. Tibet is a traditional Buddhist capital with a rich cultural heritage. The Tibetan experience is once in a lifetime experience. If you are in Tibet then, you should visit the lake. So go try hot buttered tea alongside a colorful bedecked yak while overlooking Yamdrok Lake.

Pangong Tso (Tso means Lake) is another high altitude lake situated in Ladakh valley of Indian part of Himalayas and Tibet of China. It is at an altitude of 14270 ft above sea level. The lake is 134 kms long and about 5 km wide at its broadest point, it has highest depth of 100 meters, all together the lake spread over 604 sq km. The 40% length of the lake lies in India and 60% lies in Tibet. 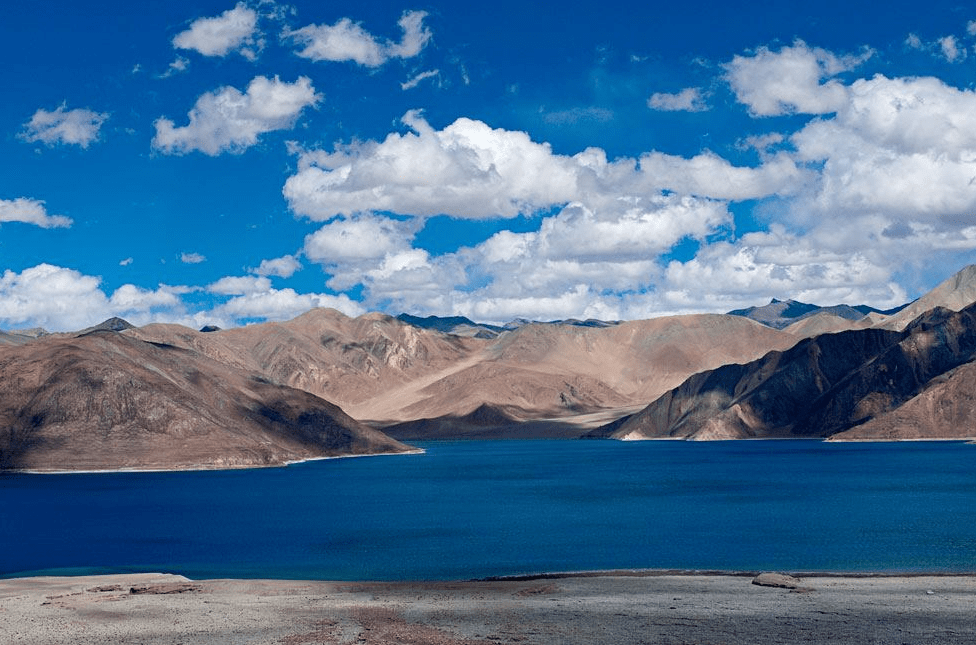 Most tourist do a day trip to the lake from Leh city which is in Indian state of J&K, but it is highly recommended to stay for a night or two here to watching the colors of the lake at different times of the day. The sunset and the sunrise are the best time to witness the sheer beauty of the lake. Pangong Tso panorma cannot be described but can only be experienced. The migratory birds adds a whole new feel and experience. Reaching the lake itself is an experience to remember. The lake completely freezes during winter.

Getting there is no pain but highly adventures journey, one will never forget driving on the road to Pangong Tso. The lake is 170 kms from the City of Leh and can be reached in 5 to 6 hours. Foreign national required Inner line permits to visit the lake because it border with China, which makes it a sensitive area. But it can be easily obtained from the SDM office in Leh.

Lake Mansarover is a fresh water lake located at the height of 15000 ft. in Tibetan Plateau 940 kms from the capital city of Lhasa. It is round in shape with circumference of 88 kms. The Lake cover the 410 sq km and has highest depth of ninety meters. The lake is highly sacred and a place of pilgrimage for the people of India, Nepal and Tibet. The lake is also the source of four major rivers of Asia Satluj river, Brahmputra river, Indus river and Karnali river. 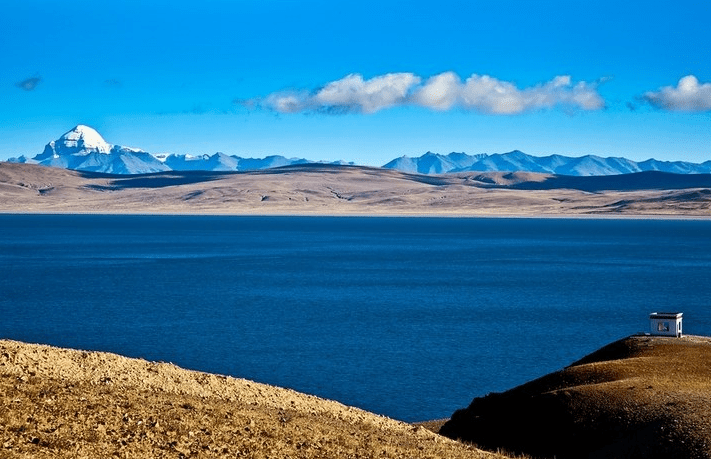 The lake has enchanting appeal which can attracts any normal tourist to it. View of Mount Kailash from the lake is breathtaking. The Panoramic Himalayas and Tibet Plateau will blow your mind. Bathing in lake and drinking its water is believed to be cleanse all your sin and will go to heaven.

Getting there is no easy job by any means. Tourist apart from the Indian nationals have to obtain three different permits to go there and it is also a 4 day journey from Lhasa and Nepal. No. of tented camps and countryside lodges are setup there for tourist accommodation.