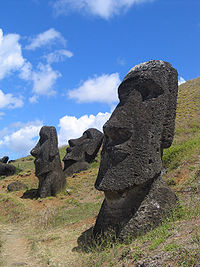 Easter Island is perhaps among the most out of the way islands in the world but over 1000 years ago a canoe paddled by people of a distant land arrived there. As the desolate Easter Island suddenly became a landing spot, an amazing civilization grew all alone there in the hundreds of years that followed. For a yet unknown reason, using a volcanic rock, the inhabitants carved gargantuan statues, for which Easter Island became most known. The statues, called moai, are amongst the most amazing ancient monuments ever found. With hundreds of these gigantic statues scattered around, the Easter Island civilization, Rapa Nui, as the people called themselves, however, then suddenly disappeared. From where did they hail and what accounted for their sudden disappearance, who were they originally or where did they go, what happened to them?

Science has studied a lot about the Easter Island mystery and as a result has solved or debunked some of the stranger ideas, but the mystery continues, and questions remain.

One of the strangest theories as to the origins of the Easter Island people stems from the 16th century when a Spanish vessel named San Lesmems disappeared in the vicinity of Tahiti. Strangely enough, when tested Rapa Nui people showed the presence of Basque genes, hence stories describe Basque survivors marrying and breeding with native Polynesians.

At least 288 moai has been documented once stood on gigantic stone platforms named
ahu. Today there are approximately 250 ahu platforms about one half mile apart in a nearly unbroken perimeter line all around the island. Some 600 more moai statues, most in one way or another incomplete, are laying around the island, either still amongst the rocks from which they were cut or on the side of ancient roads that connect quarries with the coast where the completed statues were brought to stand.

Rano Raraku Volcano is the source of almost every one of the moai. The average height of the moai is 14 feet, 6 inches with a weight of 14 tons. Large moai can be as high as 33 feet and weigh an astounding 80 tons. One incomplete moai was 65 feet tall and when complete would have weighed as much as 270 tons. Depending on how big the moai were, it has been determined that as many as 150 people worked together to drag them across the ground over sleds and rollers cut from trees found on the island to bring the various sized statues to their final resting places.

Why the moai were constructed may never be known with certainty but it’s likely their construction may have come from a culture rooted in ancestral worship, similar to other cultures around Polynesia, but which took its own direction when practiced on Easter Island. The roots of the peoples of Polynesia show undeniable connections to shores of South East Asia, even further into the interior of Asia, and thus it is indeed a fascinating quest that one can make if only to seek for himself the mystery of the Easter Island — placing Easter Island on one’s list of places not to miss may then clearly be a must, certainly if one were to tour ever to Chile, as from there to Easter Island it’s a hop – well, a long hop, but one that can be easily arranged. So many places, so little time – start ASAP!