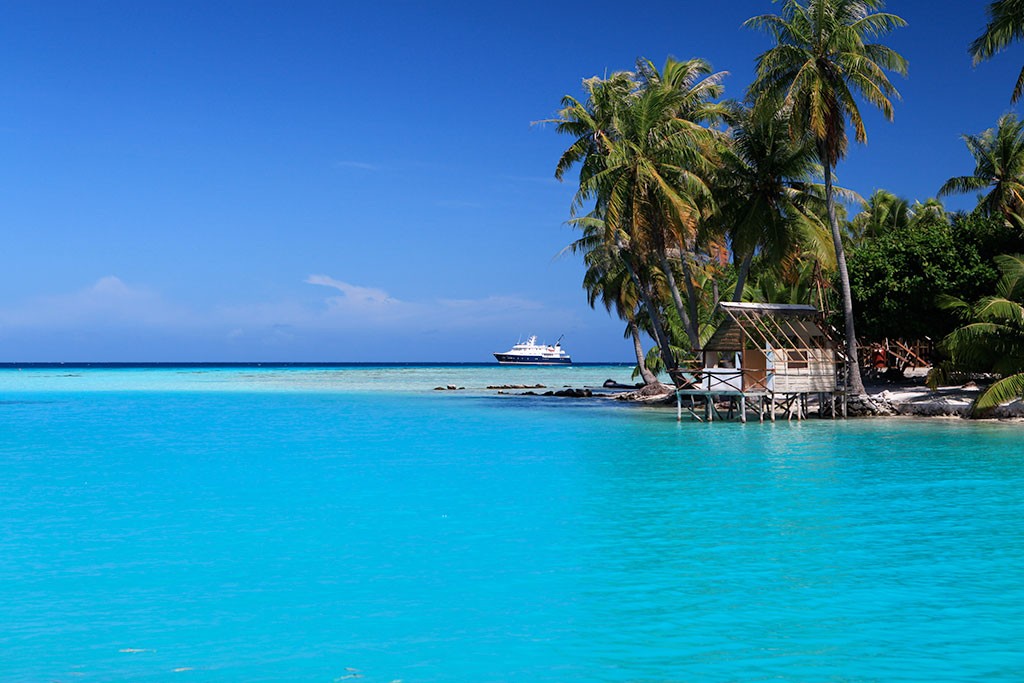 This trip is my first foray into the vast South Pacific – including Australia and New Zealand – an area that covers about a third of the earth’s surface, though with populations amongst the world’s sparsest. Paradoxically this is probably the first area to be settled once modern humans finally got the hell out of Africa, as if they were all looking for the coolest beach on which to hang ten. What is now Papua New Guinea become such a choke point that to this day some eight hundred languages are spoken – almost as many as Africa! – and that’s a lot. If the world has some ten distinct races, as is commonly thought, fully half of them are to be found in the South Pacific, curled up like hidden dimensions in some string theory of cultures. Here is to be found a pattern of human development the complete antithesis of what we usually learn, one in which people take to water and set out vast distances with the goal of settling down, sort of… yeah, me too.

When this trip is over I’ll have some 139 countries under my belt, 100 of them within the last two and years. The interesting fact is that the Caribbean region was focus of my last trip, all settled down from its previous cannibalistic tribal ways, now something of a ‘kinder gentler Africa.’ I’ve never heard anyone describe the South Pacific that way, except maybe a few carefully chosen tourists. We’ll soon see now, won’t we?

Not only CAN you go home again, but you MUST. That’s part of the environmental feedback that builds and sustains human consciousness and cultures. The latest of these feedback loops was my journey ‘home’ to Mississippi two weeks ago for a little pre-holiday communion with friends and family. That was easy. Now comes the hard part, communing with the in-laws… in Thailand. Actually the reasons one HAS to go home again probably have more to do with the home than with the returning. Who even has a home to return to? We Americans are a nation the moral equivalent of army brats. Social mobility has a price, and the cult of consumption has a hollow center. If you don’t have a home, then make one. It’ll do you good. Actually it’s nice to be the one that left, while the family center remains intact; that way you get the best of both worlds. But that’s really not fair to the others now, is it? Thus was born the ‘family reunion.’

The idea for this trip started a year ago, when I claimed a frequent-flyer award with China Airlines, rather than watch the miles expire from disuse, ‘use ‘em or lose ‘em’ being the operative concept these days. One-way to Bangkok was all I could afford to claim, which at the time seemed appropriate, since I figured to be returning with my wife by now anyway. When I realized that would not be the case, the challenge was to use the trip to best benefit, since buying another one-way back would hardly be much of a savings. The best I could come up with was to do a massive round-the-region tour, seeing many- if not MOST- of the region’s countries, something that back-tracking would not facilitate, certainly not with Bangkok in the same itinerary. Truth be told the emergence of budget airline Air Asia is indispensable for this trip to work out cost-effectively, notwithstanding my intense dislike for major stockholder and Thai ex-PM Thaksin Shinawatra. I guess I can somehow deal with that philosophically.

So my in-laws pick me up at the airport and take me back to the family compound where I once lived with my wife, their daughter-mother-sister. There’s the family dog that we got as a newborn reject from the temple, along with a long-gone cat that together prompted my theory of pan-mammal cultural harmony. He seems to remember me, saying in dog language something like, “What the f—.” He’s not barking at least, something he’s usually not shy about. My keys still fit, even if my car’s battery seems a bit weak from disuse. Everything is pretty much as we left it some two-and-a half years ago, priestly offerings still in their privileged corner as if the spirits themselves were self-maintaining. It almost looks like we left in rushed anticipation of an oncoming storm. Maybe we did.

But Thailand is pretty much as I remember it, at least at first glance. There are the smiles, the multiplicity of human services, and the ungodly (!) beautiful women, all in random profusion. The best part is the (usually) gentle demeanor of the people, major exceptions being wannabe Mafia-style big-shot a**holes… and a Thai woman scorned, which has pretty much redefined the term ‘fury,’ for me at least. The first thing a Thai girl usually does when her boyfriend dumps her is chop off all her hair. That makes sense; save those pheromones for future reference. Fortunately ‘making sense’ is not one of my prerequisites for pleasure. Thailand is one of those sometimes-illogical countries- like Laos and Cambodia… or Peru and Bolivia… or Ethiopia and Madagascar… that tend to be among my favorites, but hardly the most ‘logical’ of their respective continents.

The small city of Chiang Rai is growing up in fits and starts… which is to say ‘higgledy-piggledy’… which is to say that the infrastructure will come later, if at all. A couple of relatives have passed on to the other side in my absence, with all the usual family in-fighting and back-biting of course. My stepson says they’ve closed off a street downtown for a pedestrian Saturday crafts market, in imitation of big brother Chiang Mai down the road. That’s just like they did with Chiang Mai’s famous ‘night bazaar’, now pretty much a standard feature in all Thai towns. If nothing else, it’s a great way to deal with those late-night munchies. That’s how it all started in the first place. That’s my next stop, also. My history in Thailand started there, almost two decades ago.

Upon arriving in Chiang Mai I immediately remember why I once moved to Chiang Rai way back when. Somehow Chiang Mai’s particular version of ‘Asia Lite- just for you’ doesn’t get me excited any more- if it ever really did- while Chiang Rai retains a refreshingly significant amount of what made Thailand so nice in the first place, before the foreign hordes came in and started staking their claims to a piece of its well-coiffed turf. It would be easy to get judgmental about it all, but really it’s just a numbers game. At some point the tourists and ex-pats and related service industries start taking over whole sections of the city, transforming it into something it never was before and would cease to be without constant new infusions. More startlingly they also start confusing their needs with the country’s needs and before long you’ve got a country and a culture spinning out of control. The government is wisely making efforts to control future influxes, wise even if it affects me adversely, stop the Texans in their tracks so to speak. If the sight of the country’s finest filles draped over flabby philandering foreigners doesn’t affect you, the pride with which they flaunt it will. The epiphany for me is that the things like that that once bothered me… bother me less now.

The big news so far is the politics in Thailand- or lack thereof. The infamous street battles between yellows and reds seem long ago and far away now, even if in fact less than a year. The war now is being fought mostly only in hearts and minds, though false fronts over border lines with Kampuchea probably have the silliest of ulterior motives, as though Thailand and Vietnam between them haven’t stolen enough of Kampuchea for themselves already. If it weren’t for the intervention of France long ago, we’d all be visiting the Thai ruins of Angkor Wat these days. But this is the holiday season, Loy Krathong down and New Year’s yet to come. Even this weekend is a holiday, the King’s birthday, and Christmas gets fair play, too, more than you’d expect in a non-Christian nation. They say Thais will celebrate anything… and everything. The noise from fireworks can be deafening at times.

But my goals are somewhat more sober, like repairing my computers… and myself. One computer’s ready and another is in the works, all for less than the cost of the Geek Squad’s preliminary diagnosis. More importantly I’ve finally done that long-postponed colonoscopy, and in the nick of time it seems. It ain’t pretty in there. This gives new meaning to tourism, especially for us health-care-deprived Americans. It’s worth the cost of an RT to get the medical work-over here. So enjoy the beaches, and enjoy the temples, but don’t forget the tune up the vehicle, too. Root canal anyone? So for me the trip is bittersweet, (or should I say sweet-and-sour?), visiting old friends and getting to know my in-laws… WITHOUT my wife’s presence as interface. Did I mention that my wife stayed home? And it’s all good, as it should be. The homecoming is over. Now the REAL trip begins, next stop Australia…