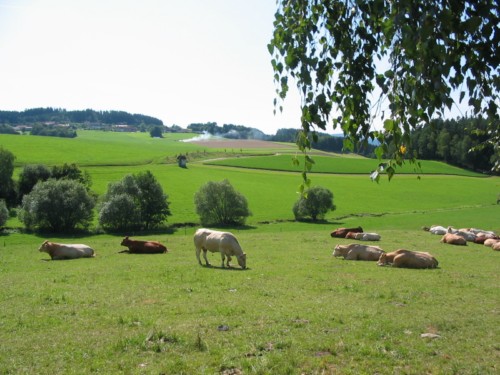 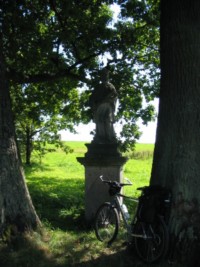 Southern Bohemia offers scores of wonderful cycling trips. Cesky Krumlov, one of highlights on the Vienna to Prague Greenway route, is also a great spots where to base yourself and spend a few days riding in different directions. In order to include short rides into northern Austria it’s however best to make your base further south from Cesky Krumlov. Ideal and very scenic base is Rozmberk nad Vltavou (Rozmberk above Vlatava River). Rozmberk is located on the Salzburg to Prague Greenway route.

A fine day ride of about 100 kilometers (about 70 miles) leads through sleepy small village of Horni Dvoriste to yet sleepier village of Cesky Herslak where a footpath-wide border crossing marked by an insignificant sign leads into an Austrian border village of Deutch Horschlag. 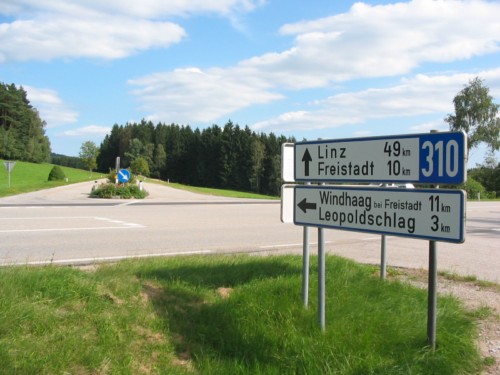 From Deutch Horschlag continue in direction of Kerschbaum, large village right on E55, major highway connecting Linz with Ceske Budejovice and Prague. While one can ride a shoulder of the E55 highway, there are far too many 18-wheelers zipping by making the journey very unpleasant if not downright dangerous.

It is best to stay west of the major highway and find smaller unpaved roads, some old field and forest roads, that once connected the local villages. Most of these roads are without traffic and nowadays hardly used and easy to get lost on as many once lead through dense forests where some seem to these days vanish. If at all possible try to keep E55 at least in sight while navigating north taking any road or path you can find. Seeing a local here to ask directions is a slim chance.

After about 10 km riding amidst fields and pastures you will pass a few houses of a small hamlet of Edlbruck. You could take a small road to the highway here but best avoid having to paddle on E55. Continue north couple kilometers more then turn east to head back to the main road. If necessary you may have to walk the bike along some fields, even a patch of a forest, but it should not be more than two kilometers and you will start hearing the traffic on E55. 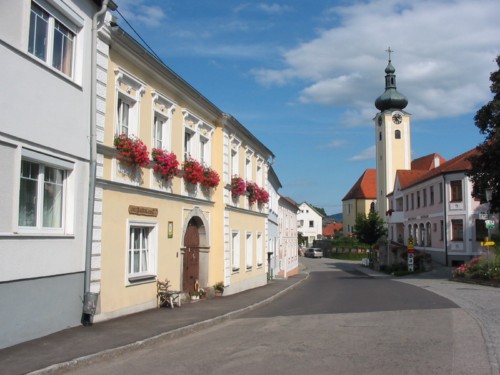 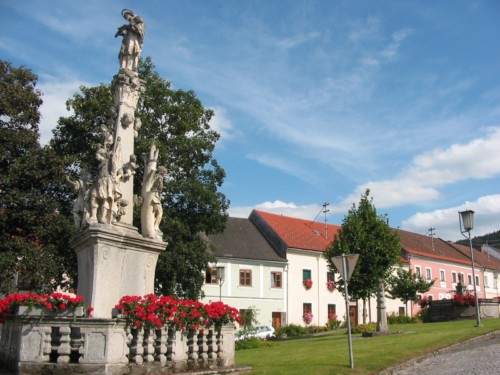 Once you locate the turn off for Leopoldschlag you do don’t have to worry about traffic any more. The two lane road leading to Leopoldschlag is in perfect condition, scenic and devoid of cars. The ride will take you first through Leopoldschlag Dorf and a kilometer later into Leopoldschlag, a large village with immaculately kept village park with a late baroque water fountain and a church, all houses seemingly freshly whitewashed, blooming flowers in the windows, a sheer joy to ride through, feeling as if riding in a fairytale.

Past Leopoldschlag the road follows River Malse, which constitutes the border with Czech Republic. Some 8 km later there is a small bridge, pedestrians and bicycles only, leading back into Czech Republic. The border crossing once again is unmanned. 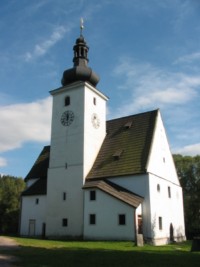 Immediately beyond the frontier one enters a former small village of Cetviny. Cetviny apparently was noted in historical annals as far back as 13th century but the only thing that remains of it today is a gothic church of Birth of the Virgin Mary. While in the middle ages the village thrived on border trade, after communists took power in 1948 they depopulated the area, constructed “Iron Curtain”, the legendary barbed wire zone, and either destroyed or converted all local village houses into border guard barracks and storage facilities.

Novohradske mountains of Southern Bohemia, as this border region is known, are very pleasant to cycle through. The handful of small hamlets that you’ll pass do not exude the same upkeep perfection as the villages on the Austrian side – in fact quite the contrary, the local residents are still struggling to rejuvenate life in this area after forty years of being left to rot, destroyed and off-limits under the communists.

A great place to stop for refreshment on your way back to Rozmberk nad Vltavou is a hilltop hamlet of Svaty Kamen, meaning Holly Stone, dominated by the pilgrimage Church of Our Lady of the Snows, a 17th-century baroque church built over a large stone (actually two giant boulders), the site of the revelation of the Virgin Mary dating to 16th century when pilgrim first started to arrive visiting a small chapel that was initially built over the Holy Stone. Significantly destroyed by communist border guards during era of post-WWII communist Czechoslovakia and only reconstructed after 1989, Svaty Kamen has an idyllic setting with soothing views of pristine countryside of pastures and forests 360-degrees around. 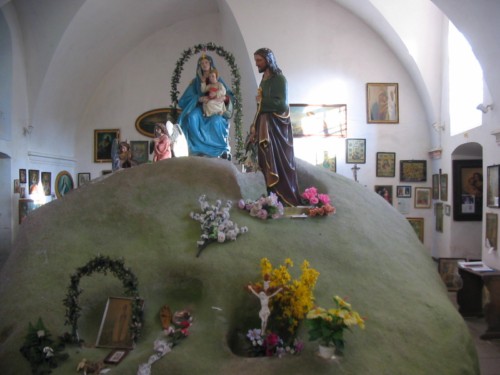 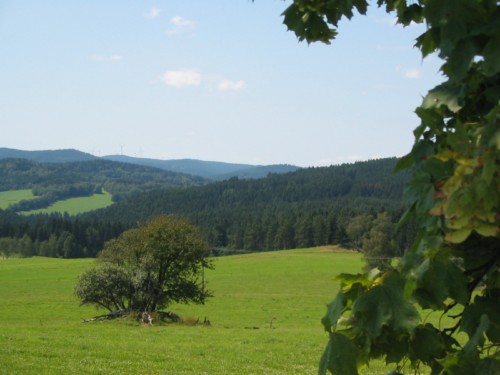 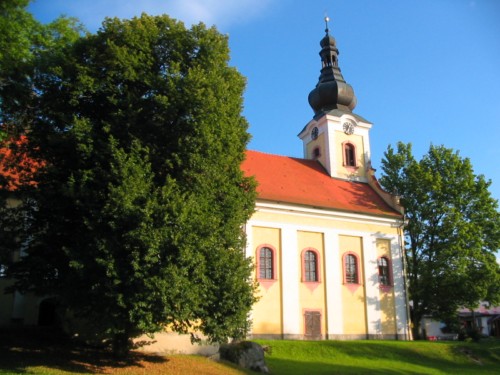