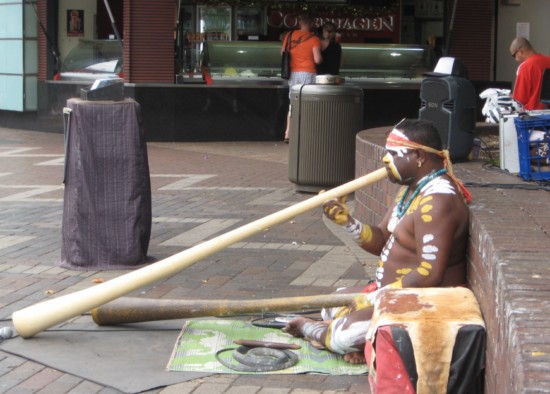 Well, I already had a couple days in Brisbane BEFORE my side-trip to PNG, so that gave me a little bit of an idea of what to expect in Australia, some good and some bad. I originally landed at Gold Coast, not Brisbane proper, and the cheapie airport there wasn’t much better than LCCT at Kuala Lumpur. Don’t you just love it when you get ripped off right at a country’s gate? The ATM’s don’t work, so you have to change money at the Forex counter where $100 USD will net you about $85 AUD, even though the USD is technically worth more (usually). The water fountains don’t work, either, so you have to buy their bottled water, c-l-e-v-e-r… Just like America, the people are very nice, but the banks can be real a**holes.

It wouldn’t matter if things were cheap… but they’re not. Oz ranks right up there in price with the big boys of Europe, at times perhaps even reaching the stratosphere of the Alpine and Scandinavian countries. On the way back from PNG, I connected straight through to Sydney, where things only get worse price-wise. To even get from the international terminal at BNE to the domestic terminal, you’ve got to pony up $5, which is pretty outrageous in principle, and then in Sydney to get into town we’re talking $15. I was figuring an hour-long ride for that price, but it was less than fifteen minutes.

Food and accommodation are the same story, some variation on the themes of high and higher. I came in quite hungry after flights and air food whose high prices are matched only by their low quality. So I finally broke down and bought a $4 slice of pizza around midnight, that after much looking. And it was good, I’ll have to admit, made by the kebab guys. I’ll probably try their falafel later. Sydney is pretty wild on a Friday night btw, at least here in the war zone close to Chinatown. There are Asians of all stripes here- all affluent stripes at least- in addition to the predominant Chinese, especially Koreans and Thais, but also Japanese and others. If this is not exactly SF south, or even LA, it’s at least Vancouver.

Next day I take a quick walk to see the major tourist sites- Opera House and Bridge, whatever- but quickly come back to the Chinatown area when hunger strikes. If you look hard enough, there are some deals to be had, but it’ll take some looking. Paddy’s market in that area is a good place to start, an open-stall market a la Bangkok or Hong Kong. Though there is much bric-a-brac and faux fashion, the best part for me is the vegetable market. This gives a valuable clue into the Sydney and larger Australian markets. Here’s the skinny- it’s all markup. Prices there are half that of the supermarkets down the street. In the US, they’d be higher because of the rarefied atmosphere of a street fair… but not Sydney. This is where the smart money buys groceries, especially produce, and that probably means every Asian within a several mile radius. I’ll be stocking up on cherries here, it being prime season right now, the perfect opposite to the June cherry season up north. Dip them in Nutella to get closer to God. Thanks btw, Mr. G…. I like your work.

Of course the big news here for the past week or so was Oprah’s arrival and subsequent conquest of the land Down Under. This is easily the biggest deal since the 2000 Sydney Summer Olympics, back when the world was a simpler place. She basically took over the city for a few days, people coming in from all over to be witnesses and participants. They’re still debating over how much good she did for the country’s moribund tourist industry. The debate I like was the one over whether tourists come to see specific unique attractions or simply to get the ‘feel’ of the place, they ultimately deciding that nobody would go home without seeing a kangaroo or a koala. I beg to differ. Please let me differ. Seeing these animals on a reserve or such is no different than seeing them in a zoo back home. How many Americans have ever seen a bear in the wild… or an elk… or even a deer? I want to ‘get’ the culture, but have no illusions of plumbing the depths of its wildlife. Any encounter will be more than what I expect. Oh yeah, about solutions to your tourist woes… it’s the prices, dummy… $4 soda? Yeah, right…

So after a few nights in Sydney I’m ready for something else, a three-day gap in my itinerary already there in anticipation. Sydney’s okay, but not for nine days straight, not at these prices. I’ll still have three days over Christmas in the King’s Cross area, a bit different from the tourist area at the quay OR Chinatown. So I tentatively booked a car, but am having second thoughts. It’s $150 for three days, but then there’s gas- $5 a gallon- and lodging is a question mark. If I knew there’d be parks with camping available, I’d just do some car camping, but nothing’s definite. You gotta’ be careful where you sleep. I have a feeling Hertz is going to add extra charges, too, and there’s a huge deductible on the limited CDW included. The way these guys do biz would make a Chinaman blush, especially the way they exploit your insurance fears. So I check the buses at the last minute, and find overnighters to Melbourne for $75, same coming back, space available. I’m in, two nights on the bus coming and going and one night in a Melbourne hotel for the same price. Sounds like a busman’s holiday. I play with a paraplegic pigeon while waiting…

Of course the high concept is to see some landscape, that being indispensable to a true understanding of a place… but no such luck on the outbound leg. I’m starting off after a night of insomnia, so of course I nod off immediately on the bus… then stay awake all night through the dark. Then shortly after sunrise we’re pulling into Melbourne, so I can’t say I saw much, if anything. Hopefully the way back will be better. Hopefully I’ll sleep tonight. Just because I’ve somewhat mastered the art of insomnia doesn’t mean I like it. A bad weather front seems to be moving out as I move in… but not quite. Turns out my hotel is but a few short steps from the bus terminal so that’s good. I stop by to see when check-in time is, and they check me on in… at 7:30am, even better. They’ve even given me an up-grade to business class, so I’m stylin’… especially after that grubby hostel in Sydney.

So I head straight out and see some sights. My first impression is that I like it better than its bigger sexier sister. If Melbourne has a little bit less of the flash and polish of Sydney, then it compensates with more old-time funk and feeling. The Victoria market-place is as authentic as any I’ve ever seen in the Western world, no make-shift retro-fit in crowded basements. This one looks like it’s been here since the beginning, one of the best farmers’ markets I’ve ever seen, in fact. It’s a bit cold in Melbourne, though, barely reaching 20c-68f on the day of summer solstice. Then it rains, zzzzzz…

I can certainly appreciate seeing the far-flung cousins who make up the Pacific contingent of the Anglo-derived cultural nexus, but ultimately it’s mostly just one more generic consumer culture, food courts and smart bars, heavy on the grog. Oh yeah, and Australia’s very white, a racist’s wet dream, few blacks or Latinos or Muslims to sully the mix, compliant hard-working light-skinned Asians supplying whatever ‘diversity’ needed, from hot-and-spicy Thai to sweet-and-sour Chinese to hot pickled Korean. Of course dark-skinned people are welcome to apply, but you know… paperwork takes time. If anybody makes an issue of it, they can just cite the standard myth about the need for ‘Australian quarantine’. There is hardly even a sampling of Australia’s sprawling impoverished next-door neighbor Indonesia, much less PNG. Go figure. All-white countries tend to be very expensive. Aboriginal what…?

If nothing else it’s a kick seeing Santa during mid-summer. In all fairness, though, the whole Christmas craziness of the North is much less here, and I suspect any craziness that exists is the result of Northern transplants… but I could be wrong. After seeing the half-mile line in front of Myer’s department store in Melbourne at 9pm on 21 Dec JUST to see the Nativity scene in the window display… I’m starting to think that this just might be a growth industry Down Under. I don’t know; does Santa surf? On my last (second) day in Melbourne, at least I found a coffee house with free Wi-Fi, sooooo 2006… at least there’s hope.

On the way back to Sydney I finally get some views, and it reminds me a lot of California, not surprising, I guess, since they share very similar latitudes, though on opposite sides of the Equator. Towns are neat and trim, too, one of the perks of ‘white Australia’ I guess, heavy on the British model. Once back in Sydney my new hotel in King’s Cross is a welcome treat, complete with kitchenette. But the big news is that McDonald’s has free Wi-Fi, as does a restaurant across the street. Things are looking up. So there’s not much left but the Fat Boy’s ride, and the kids waking up pre-dawn with visions of technology dancing in their heads. That’s when I’ll celebrate my own version of Christmas, walking in the early dawn through empty streets in a strange city. Blessed Emptiness! It doesn’t get any better than that. Next stop New Zealand. It should be a cream puff. C U there.