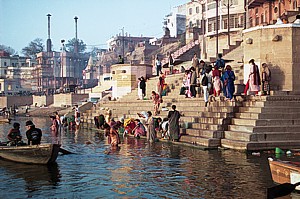 Every year tens of thousands of pilgrims visit one of the 2,000-odd temples along the banks of the Ganges at Varanasi and bathe in the river. One of the seven sacred Hindu pilgrim sites in India, Varanasi is also one of the world’s oldest cities, where Lord Shiva is said to have made his home since the dawn of creation. Mentioned both in the Ramayana and the Mahabharata, Varanasi is to many the religious capital of India.

Varanasi takes its name from its location between the Varuna and Asi rivers which join the Ganges as it makes a broad curve north. The Hindus call the city Kashi, the city of light-after the golden luminescence of the temples, ghats and ashrams in the early morning. The name Benares was used by the British, and before them the Mughals called the town Muhammadabad for a short time. To this day Varanasi is a center of learning, especially for Sanskrit scholars.

Varanasi tour is one of the most popular tourist destinations in India, and is thus frequently mobbed by long weekends of explorers making their way to learn more about one of the India’s sites of cultural interest. Tourists visiting Varanasi also make a trip to places like Bodh Gaya (Lord Buddha received enlighten here), Taj Mahal, Sarnath and even Sikkim. Students of History too have also been known to frequent Varanasi as they attempt to widen their scope of learning. There are those who come to this holy city to participate in spiritually enriching activities, like the yoga and meditation, Hindu ceremonies and pujas, including cremation on the Ghats and visiting some of the other sacred places in and around the city.

The locals of India have grown to develop their lives along the ways of the Varanasi. It is advisable to try and travel around the Varanasi Ghats individually so as to learn your way around them. The Ghats are surrounded by some great hotels, restaurants, cafes, book and music cafes where you can take a rest, or interact with the locals. Just close by there are stalls where you can buy colorful accessories like chains, religious stones, idols and books. One of the things you cannot afford to miss while in India is a boat ride across the River Ganga. It usually takes around one hour, and is an out-of-the-world experience, especially during the morning hours. You can also take a stroll along Ghats of Varanasi, and witness the Hindu enthusiasts taking their holy bath in the river, while offering water to the Sun god, Surya.