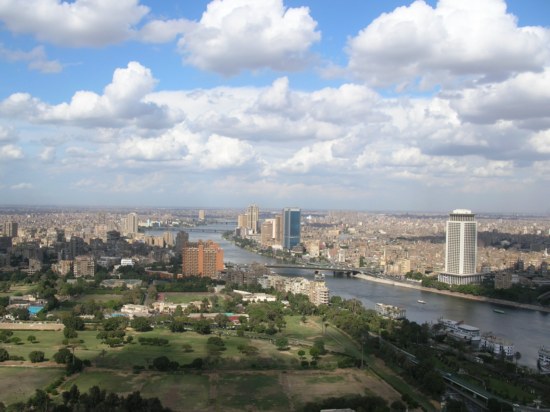 GETTING THERE – ARRIVING IN CAIRO

On October 25, having said our good byes to the mountain gorillas of Rwanda, Donald and I left Kigali, Rwanda, our next destination, Cairo. We flew out on a Kenyan Airways Boeing 727, a plane no longer considered safe to fly in the United States. At least this plane had tread on its tires, the door seals were still tight, the seat belt had two connecting parts, and we have flown on worse. After changing planes in Nairobi and a stop in Khartoum, Sudan, it was late evening by the time we arrived in Cairo.

We travel with a sense of purpose, ahead of us was twenty-eight days of touring with guides and drivers. They have not been very successful with modern history but 5,000 years ago, they were brilliant. I had been reading about Egypt for months. Amongst a list of other things to accomplish, I wanted to find out what it felt like to stand in front of their ancient monuments and to find out if their ancient gods were still willing to speak.

We were the first ones off the plane and followed the sign to Passport Control. At the bottom of a sloping hall, we were confronted with a series of enclosed booths raised several feet off the ground. Not hard to miss the symbolism, which the Egyptians have had 5,0000 years to perfect: the man with authority looks down from high, forcing the supplicant, to look up from below.

The official, with a face as crumpled and wrinkled as his white shirt, was so large his bulk completely filled out his glass cubicle. Handing him my passport, which almost disappeared in his beefy hands, I stood with my hands at my side offering up my most pleasant smile. I had opened my passport to the Egyptian visa, hopefully denying him a reason to rummage through my passport. Since 1978, there has been a peace treaty with Israel, but it is a cold peace and even though I had the requisite visa and a planned program, I was not sure what kind of welcome I would receive. In the past and I am not sure how far, if you had traveled to Israel first and then came to Egypt, you would be denied entry, and I had visited Israel last fall. The official looked at my name, then he looked at me. What had been blank eyes, a neutral face now took on an inquisitive frown, and he continued moving his eyes from my name to my face. This was not going well. He continued to do this, as if trying to make sure of something. Then holding his finger on the Egyptian visa page, he began touring my passport, slowly flipping the pages one at a time. I do this some time as a trip down memory lane. But apparently he was looking for something and I did not think he was brushing up on his geography. I turned to see the long line forming behind me and then realized how absurd, not quite Kafkaesque, but here we were late at night in a dimly lit hall, paint peeling from the walls, surrounded by trash that had not yet found a rubbish bin, and I am being subjected to menacing looks by an over officious poster boy for Egypt’s famed inefficient, corrupt, bureaucracy. Besides all the above, he had a nasty scab on his forehead. I do not know why, but after spending all that time studying my passport, he then asked me where I was from. By now my hand were firmly planted on my hips and thrusting my head forward pronounced “I am an American with a perfectly good visa issued by your government. He replied, “Oh, Obama” and with a hand dismissed me. The scab on his face was infected, looking similar to the young man with AIDS I had met in South African several years ago. What was the signifence of the scab?

Standing at the baggage carousel ready to claim our luggage, we found ourselves surrounded by a group of baggage handlers who in broken English welcomed us to Egypt. Just arrived and already we could tell the difference in behavior between officialdom and the people trying to make a living off the tourist trade. A young man in a grey suit, wearing a pink shirt and red tie, swooped in pushing a trolley, scattered the baggage handlers , introduced himself as Mohsen, our “tour leader”, loaded up the luggage and whisked us away to what he thought was a waiting van. After several phone calls, the driver was located and while standing in the parking lot we noticed a lack of visibility, assuming it was a late evening fog. Eventually the driver showed up and we were on the way to our hotel.

Mohsen was an affable young man who informed us he had gone to guide college and to prove his skills made the executive decision, due to our late arrival, to being our tour the next morning at 10:00 rather than 8:00. I knew we had important sites to visit but we were tired and figured that a graduate of Tourist U knew best.

We rode into town on the ring road built by Mubarak in the mid 1980 as an attempt to alleviate Cairo’s burgeoning traffic problem. Moshen was proud of this road and even though at this late hour traffic was moving slowly, he made it sound like it had solved all of Cairo’s traffic problems. The ring road was followed by a series of over passes high enough to allow a view of rooftops and underpasses built so close to existing apartment buildings that we could have grabbed the laundry off the balconies or clotheslines that stretched from window to window. Even in the night, we could tell the massive apartment blocks we were passing had deteriorated into one giant slum.

We figured we had six nights in Cairo and all would soon be sorted out.

TEA ROOM – A PERFECT METAPHOR OR EGYPT’S PAST AND PRESENT

The hotel, located on the banks of the Nile, was luxurious, dripping in marble and antique furniture with heart stopping flower arrangements dominating every vista. From our corner room on the 16th floor, our first view of the Nile spread out before us. The Nile at night is bejeweled. Lights from buildings lining the riverbank are reflected in the slow moving, silver tonrd water, strings of lights embellish the bridges, and below all along the bank, house boats were ablaze, festooned with gold, glowing brightly against the darkened night. The day before we were trekking through the forest of the volcanic Viruga Mountains looking for gorillas, now flung from one state of mind to the other, I was looking at the bed sheets contemplating thousands of thread counts.

After settling in went in search for the bar and sat down in a beautifully appointed room splendidly decorated in what the Egyptians thought to be French decor. The opulent gilded Louis whatever furniture, sumptuous brocade drapes allowed to puddle onto the floor, tied back by hugh velvet tassels coordinated with the magnificent crystal chandelier casting a diffused light over the entire room. The Egyptians and the French began to consider each other after Napoleon’s 1801 attempt to conquer Egypt. Even though the British thwarted him militarily, he was successful in introducing French culture. The Egyptian rulers and the elite embraced all the externals of that culture, spoke the language, developed an appetite for French decorative accessories, vacationed in Paris, buying up all the latest fashions. This Francophile mania of what they perceived to be French reached a crescendo in the mid 19th when the Frenchman, Ferdinand de Lesseps, completed building the Suez Canal. While the Egyptians were copying the material aspects of the French, the French in turn, led by mid 19th artists, were romanticizing the Egyptians. Ship loads of French artists arrived, covered canvases with turbaned sheikhs in flowing robes charging through the desert on noble camels. The charm of Arabic life was not only fantasized but also eroticized by famous paintings of odalisques and dreamy harem girls waiting to be selected. However, this fascination with the West eventually led Egypt’s rulers into bankruptcy and the British, being the largest holder of Egyptian debt, stepped in June 1879 and effectively took over the country. It never became a proper colony but the British remained the overlords until thrown out by Nasser, proclaiming Egypt for Egyptians.

In today’s postcolonial scholarship, it is highly fashionable to criticize how the West has portrayed the East. Thinking of that relationship, I noticed, sitting under a large painting of an oasis depicting Arab warriors on camels armed with scimitars, a group of young suited up Americans armed with Blackberrys, computers, and brief cases. Too well dressed to be aid workers, we took them for business people, probably bankers. (This room also had a magnificent blue stained glass window, representing the influence of the Mamluk who ruled Egypt from 1250 – 1517.)

We soon found out we were in the tearoom and the bar was literally down the hall and around the bend. The bar reminded us of one of those grand old famous bars with its dark wood trim, leather upholstered bar stools, and music from the 1940’s. In Nairobi, at the Stanley Hotel, we drank at the bar that Hemmingway frequented between big game hunting trips but had no idea who lifted one here. The bartender was very friendly and we ordered two double Johnny Walker Black on the rocks, after all, it had been a hard day. He smiled, poured the drinks and with just a small amount left in the bottle, graciously emptied it and began filling up bowls of potato chips, peanuts, and olives. With the removal of a few chips or olives, our bowls were refilled to flowing. Enjoying the drinks and making a dinner out of these snacks, we decided to end the evening. We had not made the time to check out the conversion rate for our dollars and when the bill came, we asked him how much this was in American dollars. Seventy-two dollars he said……. there surely were things we were going to have to sort out.