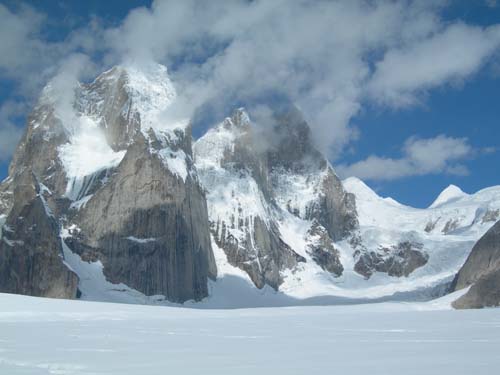 Anyone who has ever ventured along the Indus and the Karakoram Highway, past Chilas, a market town in the shadows of Nanga Parbat and a former staging point for the crossing of the Babusar Pass, had reached the doorstep of the Karakoram. Here passed one of the ancient caravan routes that lead across Hindu Kush and mighty Karakoram, connecting lower Sind and India with Kashgar and Taklamakan Desert, the gateway to China on the legendary Silk Road. The impressive Nanga Parbat marks the westernmost end of the Himalaya. To the north dominate the Karakoram. To enter the real amphitheater of its snow peaks and glaciers one must continue past Gilgit into Skardu and from there to Askole and beyond. It’s then that the sharp, heaven-piercing peaks and oozing glaciers overwhelm, leaving one completely mesmerized.

Askole is the starting point for treks north to the spectacular Baltoro Glacier and the dizzying nest of magnificent giants of the Karakoram – Masherbrum and Gasherbrum, Mustagh Tower, Broad Peak, Hidden Peak, Golden Throne and the spell-binding K2. Mere glance across the skyline of these peaks of 24,000 to nearly 29,000 feet sends chills down one’s spine. 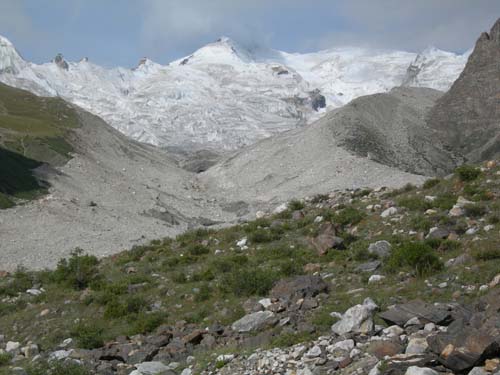 To the west descends the Biafo Glacier, a vast river of ice and rock at whose apex lies the snow-covered basin of Snow Lake. Formed by the confluence of Biafo and Hispar glaciers, into which feed smaller glaciers down side valleys, Snow Lake lies at altitude of over 15,000 feet. To navigate this glacier route is to follow another ancient route of Silk Road, though certainly not one among

the easiest, but one that connects the ancient kingdoms of Askole in the East and Nagar in West and the celebrated Shangri-la of Hunza further on. This is a solid two-week trek, three weeks plus as roundtrip from Islamabad, but indeed a trek that you will not soon forget. 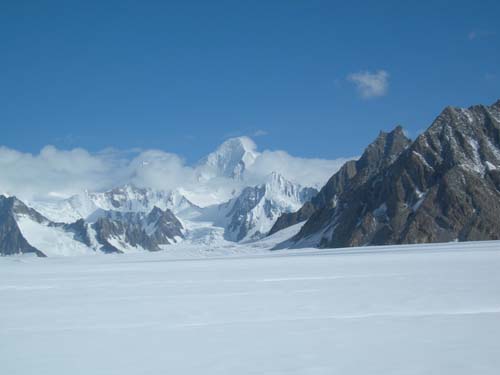 The trek that traverses the two glaciers, Biafo and Hispar, from Askole to Nagar valley, covers some 80 miles, much of it on snow and ice. From some 9,000 feet at Askole the trek ascends to Namla nearly at 11,000 feet. In recent years the glacier has receded in the lower reaches and the first part of the trek follows over a river of rocks and boulders. Past Biantha and elevations of some 13,000 feet snow and needing to cross crevasses now dominate the route. The panorama of massive rock towers and pyramids line the passage, more peaks always looming behind, the Baintha Lukper Glacier flows down from the Latok Group and as the glacier broadens one is now firmly in region of eternal snow and ice, with the ice said to have been measured here as nearly a mile thick. Next day it’s over the Hispar Pass of roughly 15,500 feet and from here on its down the Hispar glacier. Though a descent it is the route is not a stroll, traversing lateral moraines and side glaciers of Khanibasa, Yutmaru and Dichiginas, at last, reaching the first settlement, the Hispar Village. From here it’s on to Hunza’s old capital, Karimabad, to sample the local foods and apricot spirits hoping not only to restore strength after a long trek but perhaps also gain an insight into Hunza’s secret of longevity.

It’s been too many years that Pakistan has dropped from our minds as travel destinations, hence it’s time to remind ourselves of the true stunning mountain range that occupies the extreme north of the country – Karakoram – put it on your map, it is truly an exceptional feat of nature and one not to miss! Trekking Biafo and Hispar Glaciers Askole to Nagar in Hunza Valley definitely belongs on a list of the most incredible treks on this Earth!