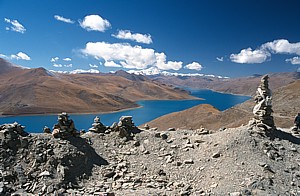 This adventure ascends to Tibet, the “Rooftop of the World,â€ where devotion and tradition reign amid the monasteries and peaks of the mighty Himalayas. And it reveals the magical mountain paradise made famous by James Hilton’s novel, “Lost Horizon.â€

.Day 2 Hong Kong – Kunming (L,SD)
Arrive Hong Kong and connect to Kunming, the capital of Yunnan. You will be greeted and escorted to the hotel. Tonight enjoy a welcome dinner featuring “Cross the Bridge Noodles,â€ a local specialty. Check into the Kai Wah Plaza International Hotel (or similar).

Day 3 Kunming (AB,L,D)
A full-day excursion to the Stone Forest, 32 acres of karst limestone formations that have eroded into cliffs and peaks, caves and pavilions, all connected by a labyrinth of trails. It is home to the Sani people, a branch of the Yi minority.

Day 4 Kunming – Lijiang (AB,L,D)
Start your tour with visits to Dragon Gate and Huating Temple on Western Hill; then enjoy the scenic view of Dianchi Lake, transfer to airport for flight to Lijiang, home to the Naxi people. In the afternoon visit Black Dragon Pool, renowned for its flowers and pavilions, and the Dongba Cultural Institute. Continue to Dayan Old Town, and explore the winding lanes, canals and ancient stone bridges. Check into Treasure Harbour International Hotel (or similar).

Day 5 Lijiang (AB,L,D)
Go on an excursion to Jade Dragon Snow Mountain where you’ll take a chairlift to Yak Meadow. This famous mountain ascends 18,000 ft. and is made up of 13 peaks resembling jade pillars. En route, you’ll visit the White Water River, Yufeng Lama Temple and Baisha Village with its Ming-dynasty frescoes. Enjoy a traditional Naxi music performance this evening.

Day 6 Lijiang – Zhongdian (AB,L,D)
Drive from Lijiang to Zhongdian, with a stop at Tiger Leaping Gorge en route. Located on the upper reaches of the Yangtze River, it is one of the deepest canyons in the world. If you’re energetic you can walk down the trail into the gorge. Continue to Zhongdian, capital of the Deqin Tibetan Autonomous Prefecture, and transfer to the Shangri-La Paradise Hotel Yunnan (or similar).

Day 7 Zhongdian (AB,L,D)
Visit Bita Lake, ablaze with wild azaleas in May and June. You’ll have the option to explore the area via horseback. Stop at the home of a local Tibetan family, where you’ll learn about its traditional lifestyle. Continue to Songzanglin Tibetan Monastery. Built by the 5th Dalai Lama in the 17th century, it currently has a population of about 800 monks.

Day 8 Zhongdian -Lhasa -Tsetang (AB,L,D)
Take the morning flight to Lhasa. Upon arrival, transfer directly to Tsetang in the Yarlung Valley, known as the “Birthplace of Tibetan Civilizationâ€ and the “Valley of Kings.â€ Visit Tradruk Temple, considered the oldest in Tibet. Legend has it that King Songtsen Gampo killed 5 dragons here and constructed a temple to commemorate the site. Also visit Yumbu Lakang, originally built in 127 A.D. when Nyatri Tsenpo, first king of Tibet, is said to have descended from the heavens. Check into the Tsetang Hotel (or similar).

Day 9 Tsetang – Lhasa (AB,L,D)
Transfer from Tsetang to Lhasa with a stop at Samye Monastery, en route. Called the “Solid Mandala,â€ Samye’s buildings are arranged in the shape of a mandala representing Buddhist cosmology. Inside the main temple are Tibetan, Chinese and Indian artworks depicting legends and events from Tibet’s history. Continue to Lhasa and check into the Lhasa Hotel (or similar).

Day 10 Lhasa (AB,L,D)
Today’s sightseeing begins with the 7thcentury Jokhang Temple, one of Tibet’s holiest shrines. This is the main destination for pilgrims traveling to Lhasa from throughout Tibet, and you’ll see pilgrims prostrating themselves in front of the temple. Your senses will be assailed by the smell of yakbutter lamps, the smoke of incense and the sounds of chanting. Barkhor (Eight Corners Street), in front of the temple, is an important meeting place and marketplace. In the afternoon you’ll visit the cliff-top Drepung Monastery. Founded in the 15th century, it is one of the largest monasteries in Tibet.

Day 11 Lhasa (AB,L,D)
Today’s tour features the Potala Palace, which rises majestically from the face of sacred Putuo Hill. Constructed in the 17th century by the 5th Dalai Lama, it is the political and religious center of Tibet. Also visit the Norbulingka Palace, the summer palace of Tibetan Kings, and Sera Monastery, a large monastery of the Gelukpa sect.

Day 12 Lhasa – Hong Kong (AB)
This morning, transfer to airport for your flight to Chengdu or Chongqing where you’ll connect to the flight to Hong Kong. Upon arrival, you will be met and transfer to Harbour Plaza Metropolis (or similar).

Day 13 Hong Kong (AB)
Today’s half-day sightseeing tour gives an introduction to Hong Kong Island. Your tour will take you through Repulse Bay, Stanley Market and Aberdeen’s floating community. Then ascend Victoria Peak to take in the breathtaking, panoramic views of the city. The rest of the day is free at leisure.Day 14 Hong Kong – West Coast (AB)
Farewell to Hong Kong. Transfer to the airport for your flight back to the USA.