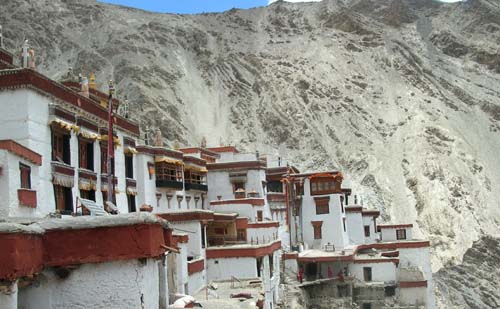 After lunch, I decided to walk into town. When I opened the metal gate, decorated with the Buddhist eight spoked wheel, (one of the eight auspicious Buddhist signs representing the wheel of law, the dharma, the way to enlightenment announced by Buddha in this first sermon), the villa’s otherwise adorable puppy began barking. I do not know why he took acceptation to my leaving, but I was tired of reading Harvey’s book and being motivated by my mantra, nothing happens when you stay in your room, I wanted to see firsthand what he had been relating. I was also interested in how my acclimating was progressing. I turned left onto the gravel road and it was downhill all the way to town. By this time the early morning chill was a distant memory and the sun was striking with laser force at anything it could reach. Walking on the extreme side of the road, I sought the shade of the popular trees lining the water canals which flowed down each side of the road.

I walked through a neighborhood of large Ladakhi style houses, similar to my guest house, and each had a metal gate with an attached Buddhist auspicious symbol. They seemed to favor the conch shell, used to announce the advent of Buddha’s enlightenment and the endless knot, an expression of never ending eternity. Over their stone wall enclosures, I could see orderly terraced fields, extending to the base of the nearby mountain. Juvenile shoots of barley, wheat, and vegetables were being irrigated by water from melted snow flowing through ancient irrigation channels. Bundles of wheat, fodder for the animals, were stacked on the flat roofs and placed on the edges as a way to avoid caving in the roof. I followed a man herding a string of donkeys, yet without knowledge of how important a donkey man could be. As they meandered along, the donkeys were depositing newly minted dung and I knew it would be collected soon because nothing goes to waste here. As in rural India and many other developing countries, dung patties are left to dry and when they reach the proper consistency they are used for cooking fuel. 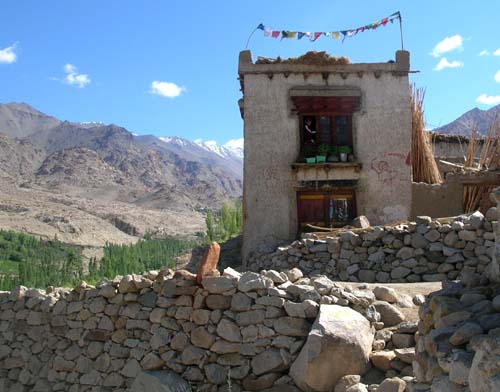 The vertical popular trees, the horizontal channels, and the grid pattern of the fields gave an order to the scene, especially when juxtaposed to the randomly placed surrounding mountains. There were orchards of apricot trees and apple trees with their fruit just beginning to bud. I passed a large prayer wheel set within a new concrete shrine. The prayer wheel looked like a large oil drum painted red and embossed with gold plates. Spinning a prayer wheel while chanting certain mantras is another way to earn merit and in Tibetan Buddhist societies it is not unusual to see people, especially old women, walking and spinning their prayer wheels. Further along, a row of small prayer wheels had been erected alongside the road which made it easy for someone passing to step over, spin a few wheels and chalk up more merit on their ledger sheet. As I passed, several women stopped their spinning to shout “juley, juley”, the Ladkahi all purpose greeting of hello, how are you, and may Buddha bless you. In the two weeks I spent in Ladakh, I continued to marvel at the friendliness of the local people. They were kind, considerate, and thoroughly without guile.

The street was peaceful, rushing water, chirping magpies with only the passing of the occasional car. The sounds of children playing could be heard behind the low stone walls and when they saw me they waved and shouted out “juley juley”. Soon I got into the swing of things and passing a group of young women with their babies strapped to their backs smacking their laundry on stones alongside the stream, all of us smiled, waved, and shouted out “juley, juley”.

I passed an enormous Tata trucks parked on the side of the road. Built in India by the fabulously wealthy Tata family, these heavy duty trucks are the ubiquitous goods carry for the entire Himalayan region. They are always trimmed with an excessive amount of chrome and decorated with inlaid multicolored chrome panels, dangling chains, and metal cut out hearts. Brightly colored tinsel is usually draped across the windshields. These trucks are always painted with religious images, which to the Western aesthetic appears garish and over the top. The Hindu driver requires images of his gods, which usually include Lakshimi, the goddess of wealth and her consort Vishnu, the god who creates the world when he is in the mood. But I am in a Buddhist country and these trucks are painted with images of Buddha and his eight auspicious signs. Horns from what must have been a very large bull had been placed on the front grille, along with chrome thunder bolts. The word “welcome” was stenciled across the top of the cab and on the back, bold black letters spell out “good luck”, something truly needed when this behemoth, decorated as a traveling carnival, passes you on a narrow mountain road.

As I rounded the bend in the road, I saw, perched on the top of a barren hill, the old abandoned royal palace, which had actually functioned as a fort. A path zig zaged up the hill and from the fort another path led to a monastery on an adjacent hill. A young monk was walking down the path and I noticed he was wearing a wearing a red fleece Nike zip up vest over his traditional robe with a matching ball cap covering his shaved head. When I look more closely at the hill, I realized the monastery was sharing its sacred location with a cell phone tower. At its core, Ladakh is a Buddhist country but its defining characteristic maybe a paradox. Its orderly, seasonally oriented traditional society, based upon religion, community, and family, is in the process of being assaulted by the outside world. For a people who had lived with a subsistence, barter economy, modernity is chipping away at the edges. They may still store wheat and neatly stacked twigs on their roofs and fly Buddhist prayer flags but room has been made for the satellite dish. The old man I saw sitting near the prayer wheels held his rosary beads in one hand and his cell phone in the other. I passed several old women trudging up the hill, their dark faces deeply lined from hard work and so many years under the unforgiving sun. Even though they were wearing the traditional Tibetan dress with their black hair in the traditional braid hanging down to their waist, they had exchanged their handmade pointed leather slippers for a pair of sturdy tennis shoes. Instead of the traditional woven basket they used to carry on their backs, which was suitable for carrying fire wood, they now wore backpacks. Of course I wondered where they planned to place the wood. A tennis court, which they advertise as the world’s highest, is located between a stand of prayer wheels and a chorten. (In the valley they have built the world’s highest golf course. I suspect playing in the desert would make it hard to recognize the sand traps and since there is no grass, the “greens” are just tightly packed sand.)

Ladakh is experiencing a period of transition and many western sociologists and anthropologies mourn the passing of the old ways. When a young man leaves the farm to seek employment in Leh, leaving behind only the old people, women, and children to do the work, they decry the breakdown of the traditional family unit. Since young people prefer pop music, they lament the loss of traditional folk tunes. Traditional story tellers, who roamed from village to village entertaining people, are finding it hard to compete with TV and this is described as the loss of the oral tradition.

Is the traditional spirit of Ladakh being altered or is it just the external manifestations which are changing? Are they buying into the entire package of Western civilization with its angst, competition, and material culture or are they just selectively picking that which they can use? Why is it wrong for a culture to adapt to the manifestations of the modern world which are arriving every day? Andrew Harvey was using Buddhism as a way out of modernism, but were the people of Ladakh going the opposite direction and abandoning Buddhism for modernism? Maybe they were just using modernism for its entertainment value.

Because my sampling of people would be too small to form any kind of opinion, I only hoped for the best. But I know enough to realize that Western NGO’s (non governmental organizations) have to spend their donors’ money and not always do it in the most culturally sensitive manner. Several years ago an NGO in Ladakh observed women working in the fields with their babies strapped to their backs. Thinking this was not good for the mothers, they set up nurseries and encouraged the mothers to drop off their babies before going to work. Today, the nurseries stand abandoned because no self respecting Ladakhi mother would separate herself from her baby. I met a very nice traveler from the Czech Republic who told me he was only interested in traveling to places that did not yet have electricity and when he could turn on the lights, he would seek out another country. I understand where he was coming from, but what about the people themselves? Would he be happy to find the people sitting in the dark singing folk tunes?

I had almost reached the town, still feeling good, but thinking about the walk back up the hill, I decided to head back to the villa and explore Leh another time. I arrived at the guest house with no problems and picking up my book, reclaimed my seat on the balcony. The mountains were just where I left them, giant peaks reaching up to impale the sky. But time had passed and now clouds had intruded into my landscape painting and as the wind picked up, they were sent scudding through the sky. Those clouds hiding behind the mountain encouraged me to wonder what was going on back there and as an engaged viewer, I was obligated to use my imagination to complete the action that lies outside the picture frame.
At 3:30 the sun refused to be snuffed out and outwitting the accumulating clouds, it managed to shine down on me with such intensity that I was forced to pick up my book, papers, and water and flee to the shade. Time passed and the late afternoon light, coordinating with setting sun, slowly passed over the mountains, forcing my cosmic artist to select another color palette. As if wielding a wide brush, he turned the previous light green mountains into somber shades of purple. The delicate light turned misty and the darkening sky smudged out all the details, turning the mountains into back lit silhouettes. Clouds massed over the mountains and in my spiritual mood their tops seemed to float in a vaporous bath.

The setting sun allowed the chill to return and I realized I had spent my first day in Ladakh desiring nothing more than to be surrounded by serenity and beauty. Harvey was seeking that Buddhist place where time and desire dissolved. As for me, I was thinking about dinner and wondering if that group of Frenchmen had brought any wine. Later, I met with the tour operator and received some interesting details. So let the trekking begin, I think. 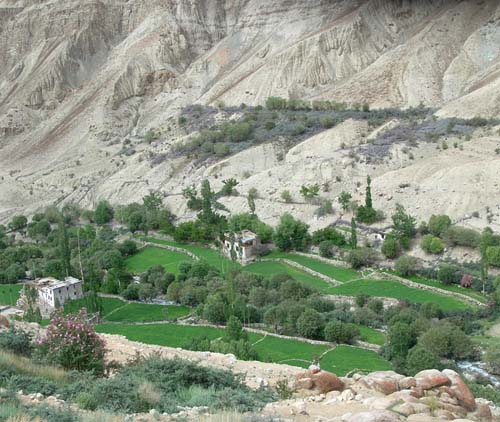