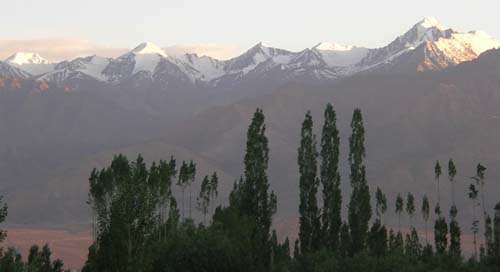 My tour program described day one as a “day at leisure“, during which time I was expected to acclimate to the 10,000 feet altitude. If I was interested in speeding up this process, I was advised not to exert myself and to do nothing more strenuous than consuming large quantities of water. Since I had been up since 4:00AM, this seemed appealing and with book in hand decided to spend the morning reading on the balcony located outside my room. The sun had not yet reached the balcony and fighting off the early morning chill still clinging to the air, I wrapped up in the thick yak hair blanket found at the foot of my bed. From the small collection of books I had brought, I selected Andrew Harvey’s Journey to Ladakh. Harvey was born in the UK and as a young man showed up in Ladakh in the 1970’s weighted down with suitcases stuffed with all kinds of material desires, which he claimed was a curse he had inherited from his materialistic forbearers. He desired to divest himself from this worldly weight and to reinvest in Buddhist wisdom and compassion, much lighter load. Rejecting the materialism of contemporary culture in favor of a more spiritual life style, he spent time in various monasteries looking for the right spiritual advisor to lead him toward a more meaningful life. I thought it would be interesting to follow his spiritual journey as I would be visiting the same monasteries.

Settling in on my second story perch, I was immediately struck by the serenity of the moment. Stillness hung in the air, disturbed only by the gentle sounds of water trickling through the ancient irrigation channels and the occasional chirping of birds camouflaged in the nearby popular trees planted alongside the channels. While traveling in western China, I saw the same trees lining their irrigation channels. With tall straight trunks and long elegant leafy branches, they serve as wind breaks and provide enough shade to keep the precious water from being evaporated by the ever present brutal sun.

At this altitude the light was crystal clear, as if a giant vacuum had sucked all the impurities out of the air, rendering the material world a product of color and light. Luminous light intensifies nature’s colors making everything it touches appear more vibrant. The cloudless, early morning sky was a domed canvas covered in brilliant shades of blue and the light that touched the roses and geraniums in the garden pulsated with glowing shades of pink and red. I had not yet opened my book but slowly the moment was taking on a mystical quality as the diffused light gave the sensation that I could discern the details of each leaf on the nearby trees.

The mountains were directly in front of me and seemed to rise abruptly out of the ground without benefit of foothills and their placement seemed as random as the roll of the dice. From the balcony, I felt I was sitting in front of a giant landscape painting. Nature had become the subject matter and I had assumed the role of the viewer. As in a pictorial composition, the overlapping mountains created a sense of receding perspective. In the clear morning light, which spread itself evenly throughout the scene, the color palette was various shades of green which accentuated each geological feature. From where I sat, man’s presence was not visible. The composition had symmetry. The tallest mountain was in the center, flanked by mountains slightly lower. The winter accumulation of snow had already melted off their summits, leaving snow only as icy veins running through their deep crevices. This melted snow fed mountain streams, the only source of life in an otherwise arid land. These rivulets would eventually join up with the fabled Indus River as it worked its way through Ladakh toward the sea. Later I would learn that the tallest mountain with its snowcap still intact was at 22,000 feet and my mute trekking guide, who had almost killed me several hours before, had climbed this mountain with his clients more than once. So much for first impressions. Placed in front of these magnificent mountains, like foot soldiers preparing for battle, was a series of smaller mountains rising to 13,000 feet. In contrast to the green mountains behind them, these appeared as golden cones in the clear morning light. These also rose abruptly out of the ground and were the same color of the earth from which they were made. In only a few days, I would learn that I had been assigned to these types of mountains. Soon we would become quite intimate as Numgal and I followed the ancient trails which wrapped around them, leading us through high mountain passes. 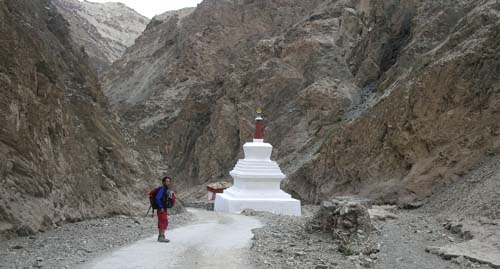 Chortens (Tibetan Buddhism for stupa) are traditionally built out of stone and covered with a plaster made from lime. The one I saw on the ridge line to the southwest was modern, constructed out of poured concrete. It had recently been built by a Japanese businessman in hopes of bringing peace to the world while at the same time earning merit for himself. The Buddhist must maintain some type of accounting system because after achieving a certain amount of merit their soul is guaranteed a better neighborhood in its next life. When they achieve the highest category, nirvana, they no longer have to experience the pain and suffering of rebirth into the material world and can comfortably reside in Buddhist paradise forever. When you do good deeds, you acquire merit. However, this is a time consuming process, which probably can be speeded up through direct deposits into the monasteries bank accounts. Brightly colored Buddhist prayer flags were attached to the spire and spread to the ground like ribbons on a Maypole. The people believe when the prayer flags flutter in the breeze, the wind is carrying their prayers to heaven. Their bridges are also festooned with prayer flags, maybe their way of ensuring that the bridges do not collapse. I would come to find out there would never be a time when the mountains were not part of my view and I was never far from evidences of the Buddhist way of life.

At 12:00 I left the balcony and went to the pavilion for lunch. A group of French people were scheduled to arrive later that afternoon but for the time being I was alone. I was served a variety of vegetables and lentils, a sign of things to come. The flavors were muted and I guessed they did not want to offend their Western guests. As for me, I was disappointed because Indian food without hearty flavor just becomes over cooked, soggy vegetables. Buddhists are usually vegetarians and if they eat meat, they will not kill the animal themselves. In Leh this job was left to the Muslim butchers and all the slaughtering had to be done under the bridge where no one would see. There were no animal markets but I did eat eggs yet never saw a chicken or heard a rooster. I wanted the tasty chapattis, but that would have to come later.

After lunch I took a walk down the street, especially to test out how I was acclimating to the altitude. Then I planned to return to the balcony and find out how Andrew Harvey was progressing with his divestment of Western ways.