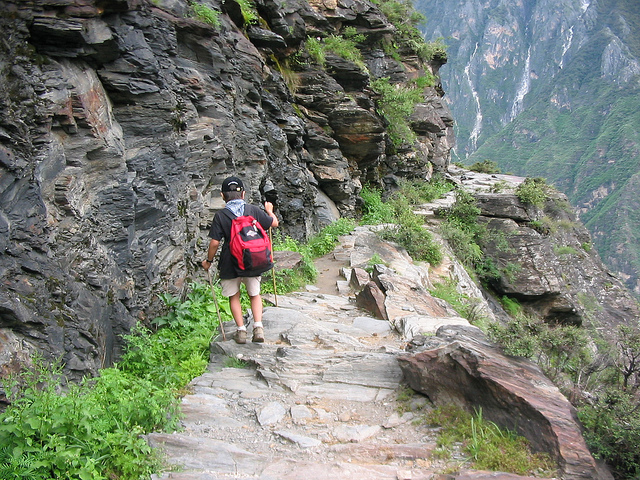 Though some of the local folks in the villages along the trail have been known to shake the tourists for cash, inventing fees for private trails, viewpoints and selling overpriced drinks, fruit and sweets, they can be largely ignored. If you can keep in your mind that the hike is doable in one and half days, even bringing along a reasonably fit 10-year old, you will be thrilled you have done the hike as the landscape is superb. The lodging along the trial is nice – don”t expect luxury or star-rated lodges, this is relatively speaking remote mountain area, or at least it once was.

The trip can be done on your own ex Lijiang or Zhongdian, leaving one or the other town for the trailhead at Qiaotou early in the morning. My son, at the time 10, and I arrived at the Qiaotou almost at midday and a hot June day it was. By the time we made it to Naxi Family Guesthouse we were pretty dehydrated but exhilarated as the trail was beautiful once it entered the gorge high above the river. The folks at the Naxi Family Guesthouse were super friendly and attentive as we happened to be their only guests that night.

The next day we got an early start and tackled the twenty-eight steep switchbacks before the pony men even woke up. From there it was a pleasant hike contouring the steep hillsides all the way to Tea-Horse Trade Guesthouse, where we had a lunch. After drinking plenty of tea

we were on our way and soon got to the Halfway Lodge and the marker. At this point my son seemed to have lost some of his earlier enthusiasm but after replenishing his energy with some food, drink and chocolate, he was good again.

The rest of the afternoon brought some stunning views of the peaks surrounding the gorge, and realization that we had no choice but to make it all the way to the end of the hike. My son did just great, fording side streams, pushing his way through a herd of goats, knowing well he had no option but to make it to Walnut Grove which was getting closer by the minute. Once we were almost directly above the buildings lining the road, his smile was triumphant, he made it, having traversed the Tiger Leaping Gorge, some 20 kilometers on his own power, in one and half days, a great achievement being just 10.

If he could do it, so can you! Below is a slideshow from our Tiger Leaping Gorge hike. And following is an option should you prefer to hike the gorge as part of your private tour of Yunnan.