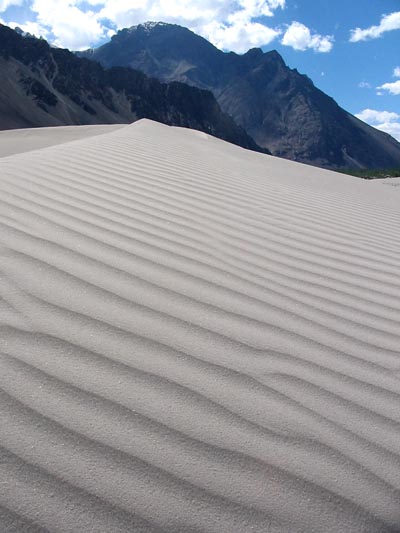 As all glaciers around the globe, the Siachen glacier in the Karakoram parts of Nubra, the northern most district of Ladakh, in the remote northwestern corner of India, is meting, and rapidly. It was reported today it has shrunk to half its size. Not long ago it was the highest battleground in the world where the Indian and Pakistani troops, now at peace, had shot at each other in altitudes well over 17000 feet. The consequences of the meting glacier, whether flooding or landslides in lower reaches of Indus, could affect also the tourism in Nubra itself. Journey to Nubra Valley, until Chinese takeover of Tibet in the 1950s the staging ground of the camel caravans on their way to Yarkand, Kashgar and other parts of Chinese Turkestan and Tibet, is one India’s most memorable journeys. Today a reminder of this bygone era of commerce with interior China is but a small population of Bactrian camels, double-humped animals which in the old days were used as pack animals on the Central Asian trade routes when up to 10,000 horses and camels a year are said to have traversed through Nubra. Whatever the fate of the glacier, Nubra, as a staging ground of one of the ancient silk roads to China should not be missed and rightfully belongs to a list of places to visit in your lifetime.