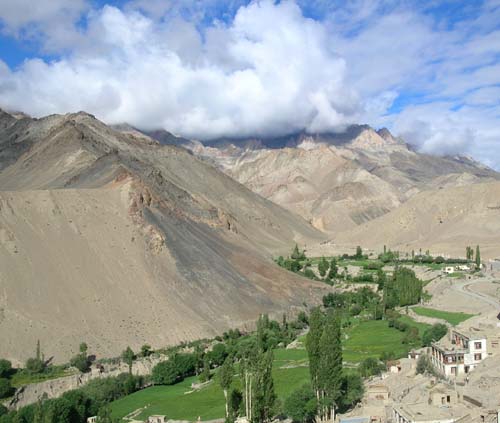 When I landed in Delhi, I was informed that my arrival had been well planned because a record breaking heat wave, hovering for days at 114 degrees, had just broken. Yes, I guess I was a lucky traveler to arrive when the temperature had just cooled off to a humid 95 degrees. Early summer is not the best time to be in Delhi but it is the optimum time to be in mountainous Ladakh. By early fall, there is the possibility of snow storms closing the mountain passes, tucking all those inside into a wintry wonderland of eight months of temperatures remaining below freezing.

After several days in Delhi, where I was able to enjoy a tour with Dr. Tillotson, an author and well known expert on Mughal India, I boarded a 6:00AM Jet Airways flight to Leh, the capital of Ladakh. Due to the fact that Ladakh shares a border with the Kashmir, the area of long time Muslim and Hindu conflict, the security at the airport was very tight and controlled by the army. Even though I passed through security upon entering the airport, each passenger was once again thoroughly searched at the gate. We were placed in small curtained off cubicles, the women to one side the men to the other, and padded down in places I do not want to think about. For security reasons, we had to step outside the terminal to identify our luggage and I am sure that which was not claimed was left behind. Upon returning to the gate, we were ordered back into the cubicles and searched one more time. Based upon previous experience, I was expecting them to confiscate my stash of batteries. I did not have to wait long until I saw them emptying my flashlights and collecting my back up stock. Ignoring my protest that this was not acceptable, the security guard stuffed the batteries into a reused paper bag. Handing me a reused claim check, he told me not to worry as I could pick them up in the airport at Leh. All I could think about was how long the nights could be in a tent without something to read.

As I looked around the waiting area, I noted we were a rather diverse group. There were backpackers of various ages toting immense, newly minted backpacks and an assortment of lost in Asia, neo hippy types with hair in dreadlocks, wearing vintage 1960ish beads. Into this mix was a group of enthusiastic high school kids from an international school in Singapore on a field trip. There was the usual coterie of do-gooder NGO’s attached to their brief cases and groups of Ladakhi people loaded down with large bundles wrapped in burlap. All that was missing were live chickens. The plane was completely full because the flight the day before had been cancelled due to a sand storm. The airport at Leh, along with many other airports in India, is without instrument landing systems, forcing the pilots to land by sight alone. If the weather is bad, the pilots cannot see, the planes do not land.

I was happy to be flying Jet Airways, my favorite Indian airline. It is privately owned, now flies to JFK Airport in New York and I have been told their pilots do not have to check their astrological charts before they take off, a problem I have experienced in the past. I believe their service rivals that of Singapore Airlines
and by the time I finished a delicious breakfast of Indian specialties, accompanied by a steaming pot of tea, the pilot announced our initial descent into the airport. 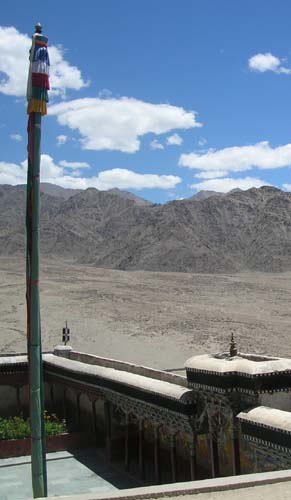 Just a short time out of Delhi, the landscape turned into desert valleys, like a giant sand box for the gods, enclosed by snow capped mountains. From my vantage point 30,000 feet high, this combination majestically extended to the horizon. In a manner similar to that which created the more famous Himalayan Mountains, the mountains of Ladakh were created when the earth’s tectonic plates, bored by standing still, thought it would be fun to crash into each other. This violent birthing process tossed these mountains up in a random manner and due to their relative youth, geologically speaking, they still have rough edges, jagged peaks, and sharp ridges. From this altitude, they appeared completely barren with no sign of any kind of life. Since we were heading toward the land of spiritual enlightenment, below us I sensed a supernatural brightness as the intense sunshine illuminated the snow capped peaks. The sky above was a brilliant blue contrasting with various tones of desert brown below.

Descending fast, rugged ridge lines rose up to meet us before falling sharply away to form yet another valley. Then the plane leveled off and we seemed to be skimming over the mountaintops. Unexpectedly, the pilot turned the plane into a hard right turn and then again to a sharp left. Why were we rapidly changing directions, were we lost, was he searching for the landing strip? I had never seen mountains so close. Finally, I could see before us a wide desert valley dotted with square patches of green and my eyes were drawn into the distance, following a long green line snaking its way down from one of the mountains. This was the city of Leh, stretching itself out in all possible directions, stopping only when reaching the base of all the mountains creating this valley. Monasteries in most every direction were perched on the tops of high hills, their colorful prayer flags radiating outward.